We usually kick of the official beginning of summer–Memorial Day Weekend– by going to a parade, visiting the local air museum, and getting out the ice cream maker.  This year our first ice cream is Home-made Mocha (we have enough Rocky Road around here already).  Can anything be better than chocolate, coffee, and large amounts of heavy cream?

You will need to collect the following ingredients:  1 1/3 c. sugar, 1/3 c. unsweetened cocoa, 3 1/2 c. half-and-half,  some left over coffee, 3 egg yolks, 1/2 c. heavy whipping cream, 3 ounces semi-sweet chocolate.   (That plastic bag on the left is filled with leftover espresso coffee.  I usually make double, and then freeze the extra for heavenly frappacinos.)  Today, I will use it in the ice cream.

Now I doubled this recipe, so the pictures I posted will show twice the amounts that you will have.  Add the sugar, unsweetened cocoa, half-and-half, coffee, and 3 beaten egg yolks into a heavy sauce pan.  Cook on medium to low for about 12 minutes (160 degrees F.).  You are trying to make a custard base here.

Now if you can do two things at the same time without burning the custard, chop up the squares of semi-sweet chocolate.  In the following photo, you will notice that I have both bitter-chocoalte and semi-sweet chocolate.  This is because when I asked my little girl to get me the chocolate from the pantry (downstairs) she started up the stairs with both boxes.  However, half way up she spilled all the squares out of both boxes, and then tried to put them back.  The problem is that she mixed them both up, so I had to taste each square to find out whether they were semi-sweet or bitter.  I tried sniffing them, but I couldn’t tell.  Let me tell you.  Bitter chocolate is very BITTER.

The photo you see is of melted chocolate, not tempered chocolate.  There is a difference.  Melted chocolate is just changing chocolate from a solid state to a liquid state.  Tempered chocolate is changing chocolate from a solid state to a liquid state with finesse.  Which means that when you are finished the chocolate is smooth and glossy. There are two important steps in tempering chocolate (a.k.a. keeping it glossy) temperature and NO WATER.  Make sure your bowl and spoon are dried.  Water makes the chocolate “seize up.”  The microwave can make this very chemically complex process rather simple.  Melt your chocolate in the microwave until it is about to melt.  Remove it and stir until you see that glossy sheen coming.  OR melt your chocolate in the microwave all the way (temperture above 104 degrees), then remove it from the microwave and add about 1/3 more chocolate pieces that are not melted.  Stir until glossy.   This recipe calls for you to temper the chocolate by putting 1/2 a cup of heavy whipping cream in a microwavable bowl.  Heat it on high for 1 1/2 min. (or until boiling.)  Add the 3 ounces of chopped semi-sweet chocolate and stir until the chocolate is smooth and melted.  (The heavy whipping cream is a fat not water, so it doesn’t cause the chocolate to “seize-up.)  And now Food Snobs, you can turn up your nose at my melted, not tempered, chocolate, but I had a baby to feed right in the middle of this.  He was having a temper problem and so was I. 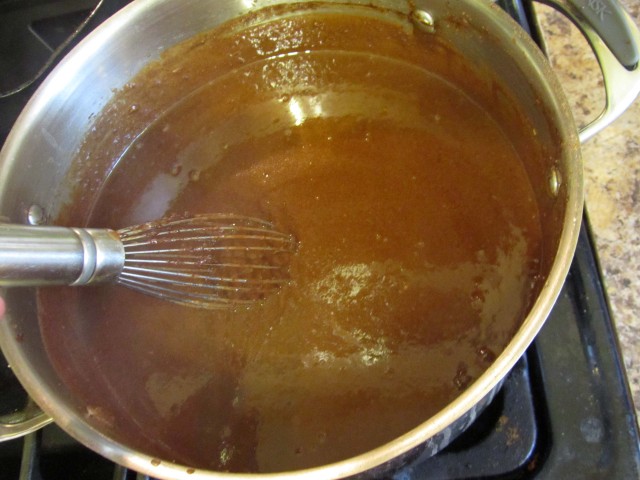 In the end, you add the microwave chocolate mixture to the stove top chocolate mixture and stir until smooth.  I did a taste test here and ended up adding some more sugar and a little more half-and-half to get the sweetness and creamy-ness I desired.  Besides, it was a good excuse to eat some of this delicious mixture.

Now I put on that handy dandy lid that came with my extra Kitchen Aid bowl, and put it in the refrigerator, and here is where the Pickles (from the title) come in.  This is an actual conversation with The Hunni.

(The Hunni enters the kitchen with thoughts of getting a glass of milk to go with his cookies.  The Hunni discovers that instead of being able to immediately grab the milk out of the refrigerator, there are pickles blocking the way.  Hunni wants immediate access to the milk when he opens the frig.)

Hunni:  What are the pickles doing in front of the milk?  That is just sacrilege!  This is the shelf for the milk.  The pickles are out of their place.

And that my friends, was an actual conversation in our kitchen.  Perhaps you understood it better than I did.

(Now, how did you celebrate Memorial Day?  Did you go to the cemetery? a picnic? a parade?  Or did you just stay home and get some work done?)