I grew up eating asparagus.  In fact, we even harvested it from the wild.  During spring planting we would take my dad his dinner (mind you it was a hot meal), and often he would say, “I saw some asparagus growing along the fence row.  I think there used to be a homestead at the corner of the field back in the day.  Why don’t you kids run down there and cut some for supper.”  I grew up thinking that asparagus was mine for the cutting.  I simply could walk down a fence row in the spring and collect all I wanted.

Later my family planted an asparagus patch.  Asparagus takes 3 – 5 years before you can harvest really thick stalks, but we still had wild asparagus or asparagus from a family member’s spring garden.  We froze the extra asparagus, and I never realized what a luxury it was to have asparagus for supper any time my taste buds sang out for it.

So when I got out on my own, the realization that I had to BUY asparagus came as quite a shock.  So did the price tag.  So did the realization that store-bought asparagus could be quite stringy.  So when I get a really great bunch, I eat all of them as my kids classify asparagus in the same category as peas which is the category of “Only To Be Eaten If Threatened with the No Screens Punishment.”  Which means that they never eat them.  Which means I really don’t mind.  Which means I get to eat the whole bunch myself.  (I think I already said that.)

Now if you are feeling inspired, you can neatly tie your asparagus into a bundle with cooking twine, then drop it into your special Asparagus Steamer.  But if you live here at My Whit’s End,  just cut off the bottoms and throw them in.  Cook until they are bright green and not a second more.  The Romans had a saying, “as quick as cooking asparagus”–i.e. very quickly. 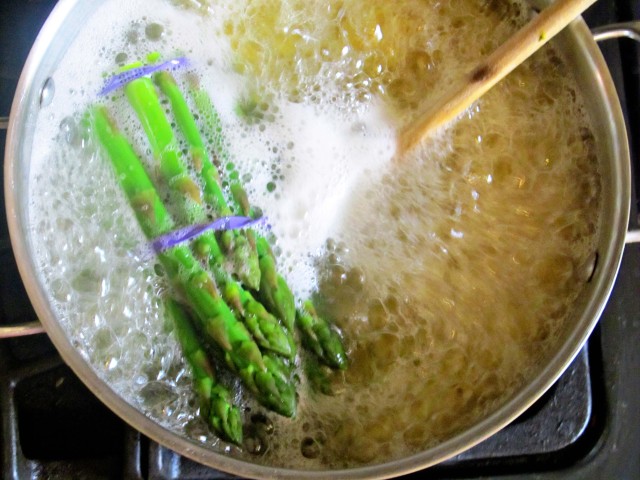 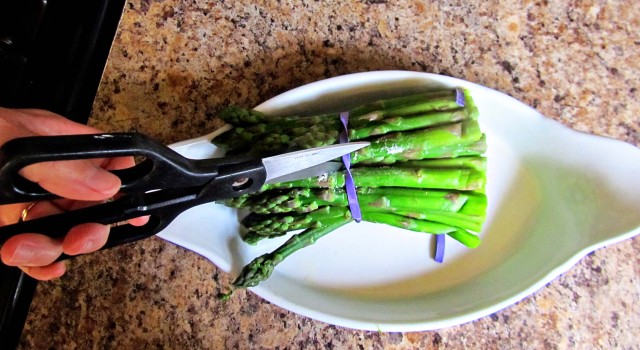 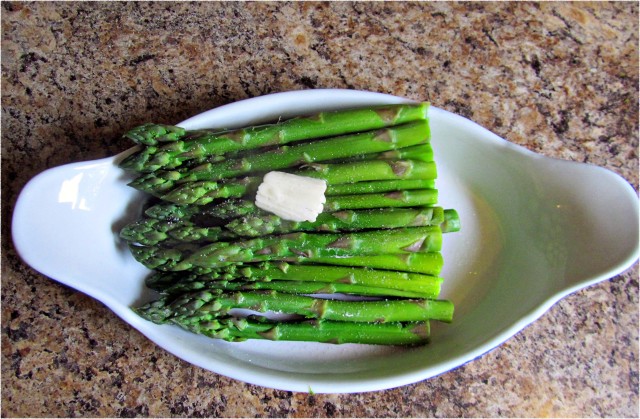 Now add a pat of butter and let it melt.  MMMMMMMMMmmmmm.  Sprinkle on some salt. . . 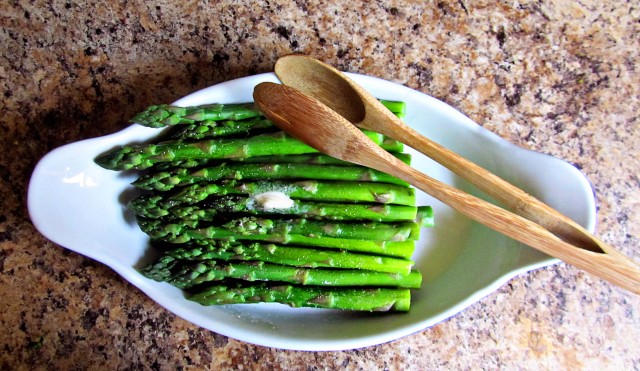 asparagus artfully decorating the top of a Quiche

asparagus roasted in the oven with olive oil, garlic, and tossed with salt

Back to reality.  Here are some interesting asparagus Nuggets of Knowledge.

Okay, I’m done.  Now if you picked your own asparagus this morning, you won’t need this time-saving tip.  You can also keep all your comments to yourself as I am immensely jealous, and you don’t need to rub it in!

Actually, please do leave a comment anyway because I love ya and love hearing from ya.