Today I ate my first tomato.  I planted this plant in the spring, and have been watering it, weeding it, staking it, and stalking it.  Waiting for a tomato to form and then ripen.  And today was the day.  After 6 months of winter, 1 month of spring, and 2 months of summer, the moment I had anticipated finally arrived.  I picked that little grape tomato, gave it a kiss, then popped it into my mouth.  6 months of a very long and lonely winter, 1 month of a cold, wet, spring, and 2 months of a very hot summer were forgotten.  That little grape tomato tasted of summer, and of long evenings, and of the sound of the sprinkler running, and the sound of kids playing Kick-the-Can, and of t-shirts and flip-flops and of sun-kissed faces.  Summer is officially here.  I tasted it today.

What is it that makes home-grown, vine ripened tomatoes taste so wonderful?  Let’s talk tomatoes.  Tomatoes 101 coming up.

But while you read about toe-matoes or tah-mah-toes, play Satchmo’s song called, “Let’s Call the Whole Thing Off.”

Tomatoes came to us from the South America. They probably originated in Peru and made their way up through Central America as the Aztecs used them by 1521.  Cortes or perhaps Christopher Columbus brought them to Europe (thankfully, the Italian were included in this distribution) and in 1692 they appear in a cookbook in Naples.  From the cookbook it seems as if they were already widely used.  By the 1590’s  they appear to be used in England.  They came back to the Americas, but most people in North America considered them poisonous.  In fact the Pilgrims considered growing this plant an abomination.  There is a story that a man named Robert Gibbon Johnson ended the fear that tomatoes were poisonous.  On September 26, 1820 he stood on the steps of the Salem, New Jersey courthouse and ate a basket full of tomatoes without any ill effects.  The crowd of 2,ooo were very surprised and Americans fell in love with the tomato.  You can listen to a 20 minute re-enactment radio broadcast by CBS of this historic event by clicking on the link below.

In 1897, Joseph A.Cambell furthered the tomato craze with his condensed tomato soup. (Campbell’s now sells soup in 120 countries.)  Today 93% of American families grow tomatoes in their garden, and we consume anywhere from 25 – 80 pounds of tomatoes/person/year.  More than half of that figure is consumed in ketchup and sauces.  The year 2007 was the year that Americans spent more on salsa than ketchup.  (Salsa costs more than ketchup so consider that fact when you say/hear that salsa is America’s #1 condiment.)

Tomatoes are grown in all 50 states.  California produces the most tomatoes that are processed, and Florida produces the most tomatoes that are eaten fresh.  (Tomatoes are even grown in Siberia in hot houses.)  The largest tomato was grown in Oklahoma by Gordon Graham and weighed 7 lbs and 12 ounces.  The grower made 21 tomato sandwiches for his family from that 7 pounder. Miracle-Grow has offered a $100,000 prize to anyone who can top this record.  So far other attempts haven’t come within a pound. Walt Disney World used to showcase a tomato plant that was the single largest tomato plant in the world.  They trained it as a tree and harvested 32,000 tomatoes in one year.  Unfortunately the plant/tree caught a disease and is no longer viewable.

From this latest fact, you will deduce that tomatoes are perennials.  Most folks grow them as annuals because frost kills the plant.  Hot house tomatoes usually can be harvested for 9 months, and tomato plants can last three years.

Tomatoes are in the nightshade family and do contain tomatine which is poisonous.  The leaves and stems contain atropine and other tropane alkaloids.  Although these are poisonous they have uses including making your eyes to dilate.  In truth, they are not to be consumed as tomato leaves tea has been associated with at least one death.  Here is a photo of the deadly nightshade plant.  As you can see, it does look like a tomato plant.  This plant is deadly poisonous!!!!! avoid it, pass not by it, turn from it, and pass away.

Tomatoes are gaining even more popularity as studies reveal their health benefits.  Tomatoes contain potassium, calcium, Vitamin A and C, and lycopene.  Lycopene is an antioxidant that studies have shown to aid in cancer (especially prostate) and helps protect the skin from harmful UV rays.  In order to gain the amount of Lycopene needed for these benefits 8 small tomatoes or 4 large tomatoes need to be consumed daily.  The good news is that Lycopene is absorbed better in a processed form (like tomato paste, ketchup.)

Tomatoes are botanically a fruit (or even more specifically a berry), however, they are classified as a vegetable for most culinary purposes and by a ruling by the Supreme Court back in 1883 (Nix vrs. Hedden).  Money (as taxes) was involved that is why we have the Supreme Court dealing with such “petty” classifications.

There are between 7,500 – 25,000 varieties (a wide range I know, but that is what I found) of tomatoes.  One tomato disease is called tobacco mosaic virus, therefore pickers are often not allowed to smoke near plants.  Tomatoes are closely related to potatoes and eggplant, so if you are rotating crops in your garden, don’t have tomatoes follow potatoes, or vice versa.

Lastly, if you have the desire to throw rotten tomatoes go to Bunol, Spain this August.  The last Wednesday of August and throw all you like.  The tomato fight starts at 10 a.m. and lasts one hour.  This happens for a week.  20,000 – 40,000 visitors come and it really is crazy as 100 metric tons of overripe tomatoes are thrown. 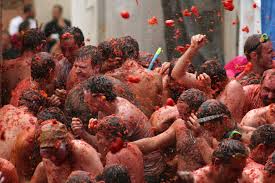 Okay students, class is dismissed.  There will be a quiz next time I meet you in person.