Posted on September 2, 2011 by whitsendmom

Let me introduce you to one of my neighbors.  Thankfully, she drops by often, and we get to have a good-old-fashion-sit-down-at-the-kitchen-table-visit.  I love her.  Since my kids don’t live near either grandma, we enjoy her perspective on life, and politics, and “kids these days”.  She shares her zucchini bread, and her wisdom, and her time.

Her name is Mrs. Thelma and half of the year she lives (diagonally) across the street from us.  The rest of the year she spends in Sunny Florida, but even then we are not forgotten as she sends us a package of oranges, and saves all the Family Circus comics from the Florida paper.  Does she maybe think that this family is a circus?

Mrs. Thelma never stops by without a basket of goodies.  She saves the Funnies from the Sunday paper for the kids and cuts out coupons and articles that might interest me from the paper.  She also saves up jars and containers that she is sure I will be able to use for a craft or in homeschooling.  Last years she had saved up 40 matching glass jars and brought them over.  I was able to match a craft to the supply and for our Backyard VBS we made “Snow Globes” (that we called Rain Globes as they contained a flower, plus a bug/butterfly, and glitter.)  This year Mrs. Thelma brought over 40 matching plastic jars, and after a little thought and research, we made “Lightening Bug” jars by dabbing glow in the dark paint in blobs on the inside.  Occasionally, Mrs. Thelma brings over a unique gift, such as the Monks and Nuns below.

I wasn’t quite sure what to do with them, but the girls loved them and played “Sound of Music” for many days.

Sing it.  “How do you solve a problem like Maria?  How do catch a cloud and pin it down?

“Climb every mountain! Ford every streams.  Follow every rainbow!. . .till you find your dream.”

“Maria: You know how Sister Berthe always makes me kiss the floor after we’ve had a disagreement? Well, lately I’ve taken to kissing the floor whenever I see her coming, just to save time.”

“Herr Zeller: Perhaps those who would warn you that the Anschluss is coming – and it is coming, Captain – perhaps they would get further with you by setting their words to music.
Captain von Trapp: If the Nazis take over Austria, I have no doubt, Herr Zeller, that you will be the entire trumpet section.
Herr Zeller: You flatter me, Captain.
Captain von Trapp: Oh, how clumsy of me – I meant to accuse you.”

You see?  The Monks and Nuns begin to grow on you. 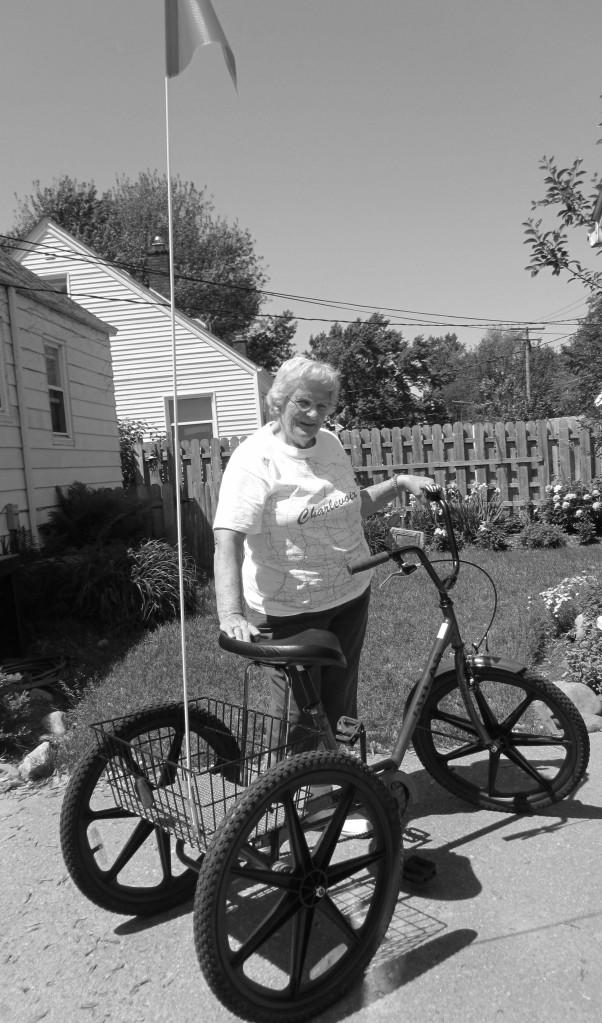 Mrs. Thelma bought herself a bike this spring and brought it over to The Repair Guy (A.K.A.  The Hunni around here) to change her bike seat. 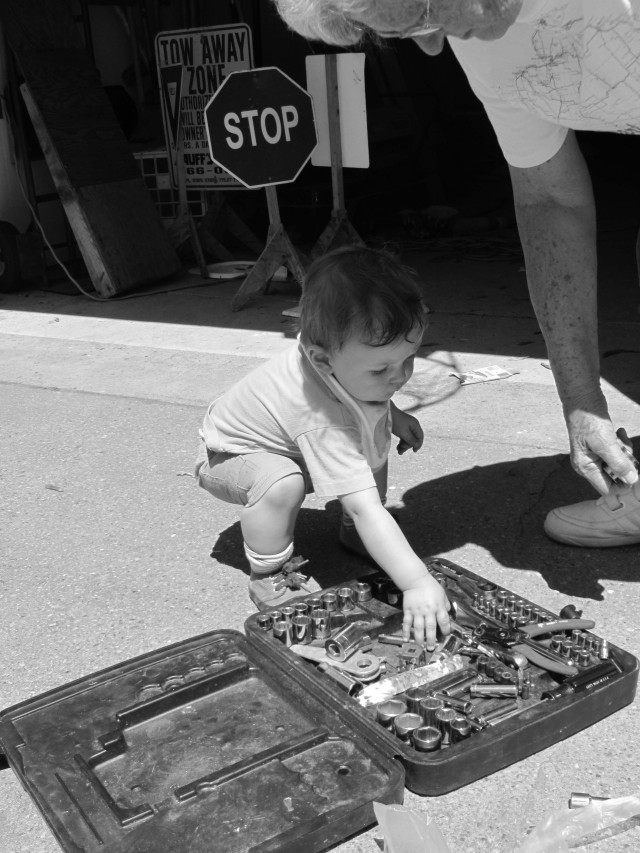 Little Man helped out by rearranging all the tools in The Hunni’s toolbox.  Anybody else, and the wool would have flown, but Little Man gets by with it as he is so cute.

This is the seat that The Hunni removed from Mrs. Thelma’s bike.  She had bought a new seat that curved up a bit more at the back to help her stay seated better.  The Hunni thought I might like Mrs. Thelma’s removed bike seat.  He said that he thought it would “fit better” than the bike seat I currently have.  I did not speak to him for the rest of the week.  Imagine him thinking that seat would fit my seat better.

After The Hunni had finished the seat changing, Mrs. Thelma took my little Eloise to pick wildflowers in the empty lot behind our local liquor store.  They came back with bouquets of wild Clover, Queen Anne’s Lace, Bachelor Buttons, and Black-Eyed Suzzie’s.  I thought that Eloise had walked but apparently Mrs. Thelma had given her a ride in the basket on the back of her bike.  Impressive for an 83 year old lady.

Mrs. Thelma is one of the last three “originals” in our neighborhood–meaning she bought her house back in the 1950’s when our houses were built, raised her family there, drove to the postoffice where she worked from that house, buried her husband and one of her two boys, and still lives there.  I enjoy hearing the history of our town and how it has changed.  I enjoy hearing about her German and Russian heritage.  I enjoy her.

Mrs. Thelma attends the parades with us.  Sometimes we go out for a bite to eat, but often we just visit in the kitchen.  I always miss her when she goes down to Florida for the winter.

She is a part of our life, and I wanted “ya’ll” to meet her.