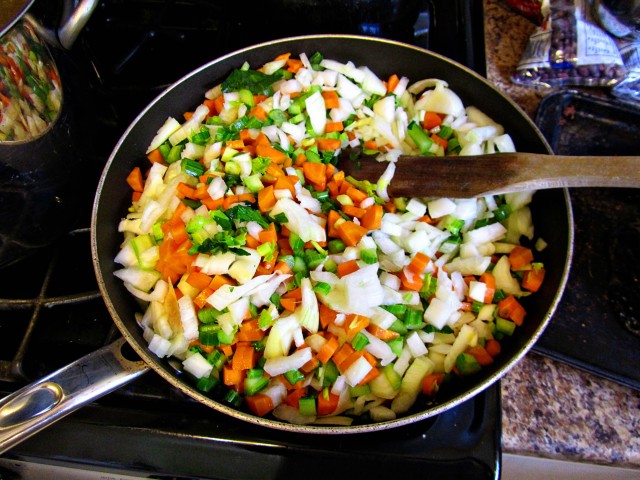 You may hate me at the end of today, but you will love me all winter when you are pulling meals out of the freezer that everyone loves.  “Let’s cook!”

In the middle of this craziness, I picked up a book entitled, “Food Diaries–How to Raise Whole Wheat Kids in a White Bread World.”  Even if you never get beyond the first chapter, it will be worth your time.  Betsy Block writes sentences like, “As is true for all of us, I started motherhood with the best intentions, but what I learned while trying to uphold the highest possible standards is that if you want to stay sane, you probably shouldn’t listen to experts too carefully; while many of them do indeed dole out good advice, they usually do so while holed up in clean, quiet, child-free offices.”  She is real.  She is funny.  She is trying.  She isn’t an expert (Halelujah for that!).  You can order her book by clicking on the blue link or borrow it from the library. The Dinner Diaries

But let’s not get sidetracked.  Let’s cook.  The first thiing we need to do is take care of the beans that were in the Crock Pot all night.  Just unplug the Crock Pot.  This will give the beans a chance to cool down a bit before we ladle them up into Tupperware/Glad containers.

While we are waiting for the beans to cool down, and before we start making a huge mess of the kitchen, grab some freezer Ziploc bags and fill them with all the frozen meatballs.  Then take the frozen meat loaves out and Seran wrap then foil wrap them.  Put both back into the freezer.  Finally, make up that BBQ sauce and pour it over the meatballs that are in cassarole dishes.  If you want to save a step tomorrow, then double the amount of BBQ sauce you make, so that you will have some for the Pulled Pork we will be making tonight. 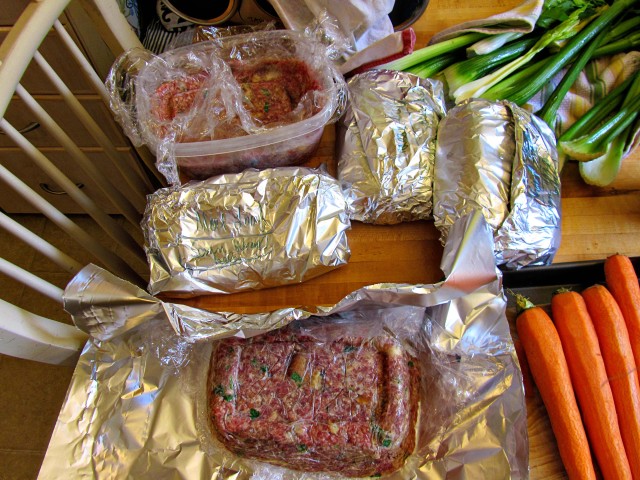 Your hands are cold from handling so many frozen foods.  Perfect.  We can now work with the hot red/black beans.  Divide the beans into containers, LABLE, and put them in the freezer.

On the menu for today is CHICKEN.  If you don’t have chicken broth made up ahead, you need to start with that.  Find your biggest pot, fill it with water, add your chicken, and seasonings (salt and pepper) and simmer until the chicken is cooked.  You want to simmer the broth, not boil it so that your stock will stay clear (instead of cloudy).

The Crock Pot is now empty, so wash it out and load it with some lentils, water, and salt.  We will add to the lentils after we do some chopping. I use Martha Stewart’s “Red-Lentil Soup with Sage and Bacon.”  I use brown lentils as that is what my grocery store carries.  When you have some Chicken broth/stock ready, you can add that to your lentils.

While the chicken is simmering, start chopping.

That’s a lot of chopping, but if you do it at the kitchen table, you might be able to sit down for a spell, or as the Bulgesses said it, “Take on off yer flapjacks for a spell.” 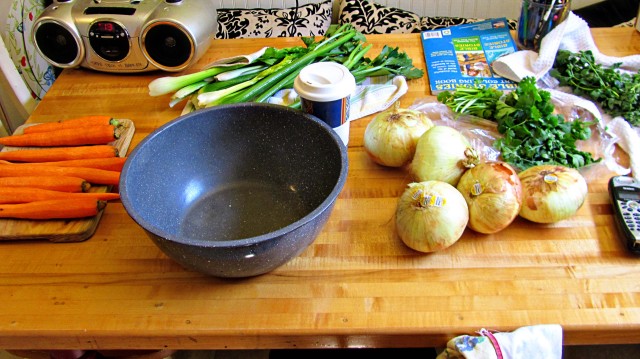 Chicken Spaghetti is another Pioneer Woman recipe.  My kids eat around the red/green peppers, but other than that, they love this.  It isn’t low in fat, hence neither am I.  Boil up the spaghetti, add some cooked chicken, add the chopped veggies, and cheddar cheese, and the rest of the stuff and go ahead and get this meal in the freezer in heatable Glad containers or Pyrex cassarole dishes.

Chicken Noodle Soup is so simple, yet it is so perfect for colds and cold days.  The key is good home-made broth/stock to give it a deep flavour.  Nugget of knowledge. . .broth is made from the meaty parts, and stock is made from the bony parts.  Stock (bony parts) has a deeper flavour due to the collagen (gelatin) released from the bones.  Basically, they are interchangable.  If you make up your broth/stock ahead of time and cool it in the refrigerator, you can easily skim off the fat and have a very flavourful, yet lighter soup.  My tip on freezing Chicken Noodle Soup is to omit the noodles.  Add them when you heat up the soup.  The noodles absorb all the moisture, and your fettecini noodles end up looking like lasagna noodles, your penne like manicotti, your conchiglie like large shells, your alphabet letters like billboard letters–you get the idea.

Nothing says comfort food like Chicken Pot Pie.  I have tried all kinds of variations on this recipes–mainly in the veggies (and shhhhh the mushrooms) I add.  I even tried to repeat a Root Vegetable Chicken Pot Pie that my kids all scarfed down at my sister-in-law Lily’s house.  But as the author of “Dinner Diaries” points out, “just because they ate it yesturday, doesn’t mean they will like it today.”  So, I have learned to keep the Chicken Pot Pie simple–no corn, no green beans, no mushrooms, no sweet pototoes, nothing too interesting–and the kiddos will love it.  Basically, I add carrots, celery, onions, parsely, and peas.  Pioneer Woman’s recipe for Chicken Pot Pie keeps it basic and of course delicious. 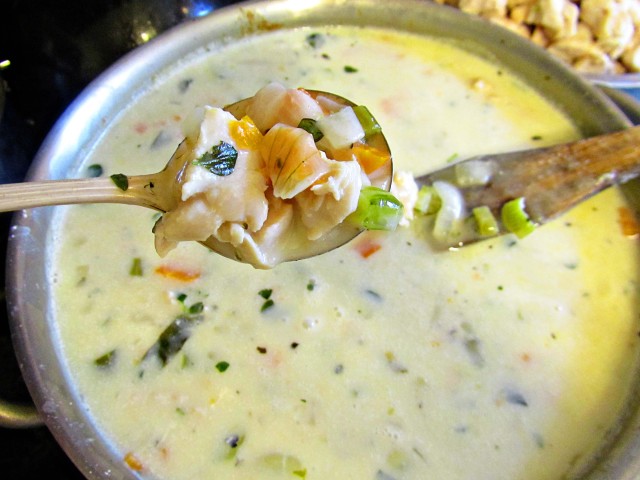 Doesn’t that make you hungry?  Don’t worry about making the “lids” or pie crusts to your Chicken Pot Pies today.  Freeze them overnight, and then it is really easy to add a crust on a frozen surface.  See those individual Chicken Pot Pies?  Aren’t they cute?  I didn’t make them to be cute, I made them for one kiddo that won’t eat peas.  They are the pes-less Chicken Pot Pies.  I know. . .I know. . .coodling.   But really, it makes meal time so much easier.  When Scout turns her big brown eyes on me and says, “Thank you, Mom.”, it makes it all worth the extra effort. 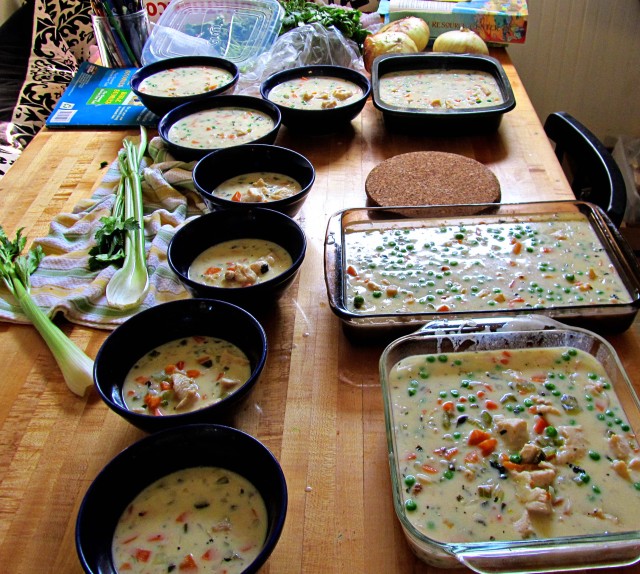 Remember this?  The corn on the cob that you boiled up and cut off the cob yesturday?  Let’s use it.  It will go into two different recipes, so use half of the corn in the Chicken Tortilla Soup Recipe and the rest in the Smokey Corn Chowder recipe. 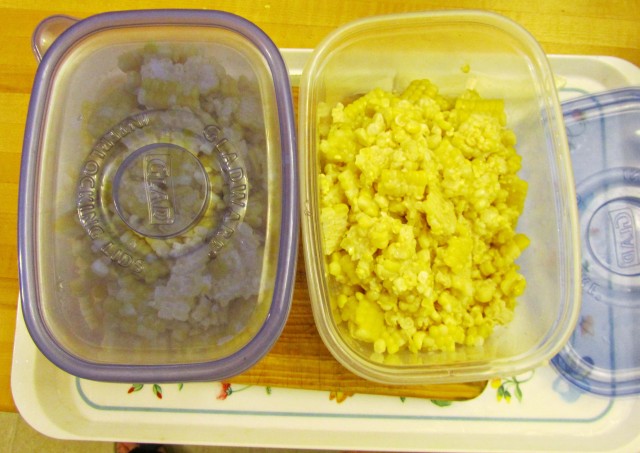 Before we move away from Comfort Food to Mexican Food, let’s make Smokey Corn Chowder.  I use my version of Martha Stewart’s “Summer Corn Chowder” (from her Martha Stewart Living Cookbook).  I vary this recipe a bit as I leave out the Poblano Pepper and add more fresh cut-off-the-cob corn.  I also add those cute little cocktail Smokey Link Sausages from Hillshire Farms (don’t mess with store brands as they can be nasty.)  I tried to make this chowder without peeling the potatoes to give it a “rustic” flair, but they just came off the potatoes and floated around as unidentifiable objects.  Lesson learned–peel the pototoes.  I also add the sauted celery and onions to the chowder (instead of the other way around as Martha Stewart suggests) as the crumbs of fried bacon, celery, and onion may taste delicious, but gave the chowder an “earthy” look.  One last tip.  If I have the corn cobs still handy and still fresh I add the cobs to the soup while it is simmering.  There is a sweetness in the cob that is transfered to the chowder.  Of course, you remove them before dishing the Corn Chowder in Tupperware/Glad containers to go to the freezer.  If you add bacon to your lentils, cook up some extra and throw it in the Crock Pot filled with lentils. 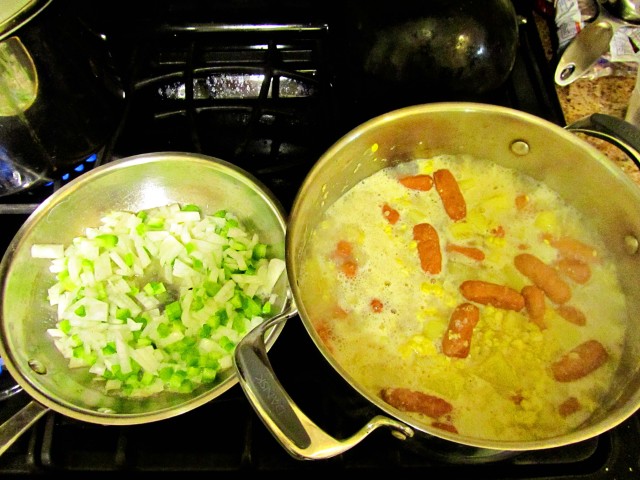 Are you exhausted yet?  Let’s move on to Mexican food.  The Hunni’s favorite soup is Chicken Tortilla Soup.  Here is my recipe. 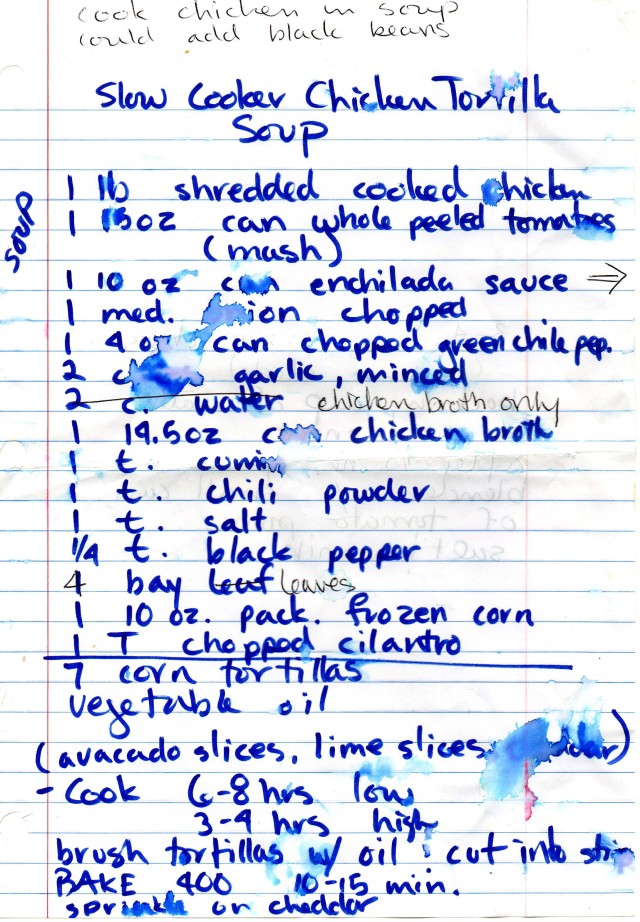 If you can’t read that, don’t worry.  Here’s the ingredients again.  You will notice that they vary slightly from the recipe above as I have tweeked this recipe a bit to suit my family’s tastes.  1 lb. cooked chicken, 1 15oz. can diced tomates, 1 10oz. can enchilada sauce, 1 medium onion (chopped), 1 4oz. can shopped green chili peppers, 2 cloves garlic, chicken broth (4+cups), 1 can drained black beans, cut-off-the-cob corn.  Seasonings:  1 t. cumin, 1 t. chili powder, 1 t. salt, 1/4 t. black pepper, 4 bay leaves, chopped cilantro.  The title of the recipe is “Slow Cooker Chicken Tortills Soup,” but my chicken got a little mushy in the Crock Pot, so I just make it on the stove.

We serve this soup with tortilla chips, grated cheddar, lime slices, and if I have it avacado slices.

We have one last job.  Ladle out the Slow Cooked Lentils into labeled freezer containers.  If you have any energy left, rinse out the Crock Pot and put in a pork roast and a beef roast that have be salted and peppered.  Add a fair amount of water and turn on low overnight.  We will start out tomorrow by making BBQ Pulled Pork (You already have the BBQ Sauce made.)

Your feet ache, your back aches, and you are oh so tired.  Ask the Hunni to put the kids in bed while you get on the computer to check your favorite blogs and Facebook.  I love both.  When the Hunni is gone, it often is the only “adult conversation” that I had all day.

so as Eloise says,

jum. jum.  (loosely traslated–please miss me a little while we are apart, but otherwise have a great day/night until we meet again.)