She said–Comics, Tattoos, and a Skeleton

Those were the offerings that Mrs. Thelmabrought over today when she stopped by for a slice of homemade bread and a visit.  I can always count on her bringing over the Sunday comics and maybe some coupons, but every other “offering” is a surprise.   (If you haven’t yet met Mrs. Thelma click here.)

Mrs. Thelma was the mother of two boys.  One of them grew up to be a veterinarian, so she was a mother to a boy who brought home every kind of animal–most alive, but not all.  This is the skeleton of a young deer, but she also has the skeleton of a raccoon and a dog somewhere in her attic.  She is very interested in our Homeschooling and loves to bring over “offerings.”

In the following photos you can see where the deer’s teeth are growing in. 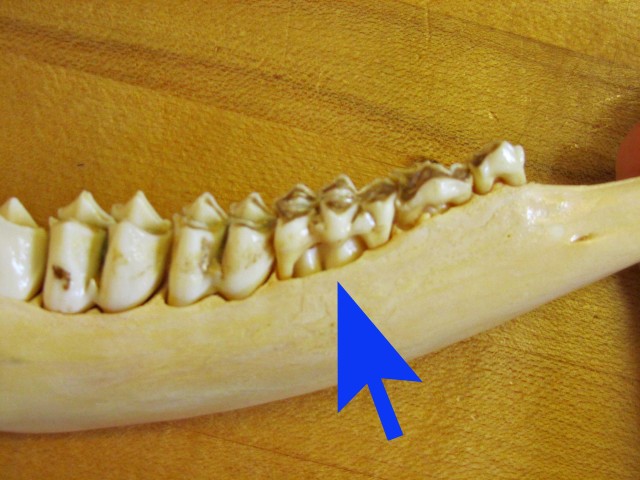 Here’s what we learned.  From this site.

Wildlife biologists and deer researchers agree that analysis of tooth replacement and wear — though not perfect is the most handy and reliable field method for aging white-tailed deer. That’s because, regardless of where they live, whitetails lose their baby “milk” teeth and wear out their permanent teeth on a fairly predictable schedule.

Aging analysis often is based on the wear of the molars, which lose about 1 millimeter of height per year. It takes a deer about 10 1/2 years to wear its teeth down to the gum line. Therefore, its difficult to determine the age of a deer that’s older than 10 1/2 years.

Most importantly, the ability to estimate a deer’s age based on the wear of its teeth is something most hunters can learn with a little study and practice.

We are pretty sure “our” deer was a Yearling or about 17-18 months old.

(2) The giveaway indoor of this age is the third premolar, which has three cusps. This is also the age where deer start to shed their ‘milk teeth,’ They’ll either be loose or gone. In this photo you can see the permanent premolars partially erupted as they push up under the loosening milk teeth.

As cool as the Yearling skull was, the Sunday comics and wet-and-apply tattoos were the bigger hit.  That’s just a slice of life here at My Whit’s End.

Samson had a jawbone and so did we.

P.S.  Mrs. Thelma’s “boy” is the resident vet at Mackinaw Island.  He helps keep all the horses “up and running.”

1 Response to She said–Comics, Tattoos, and a Skeleton