This Thanksgiving event really happened just a few days ago.  Some fellow Homeschoolers came over for an “authentic” Thanksgiving. 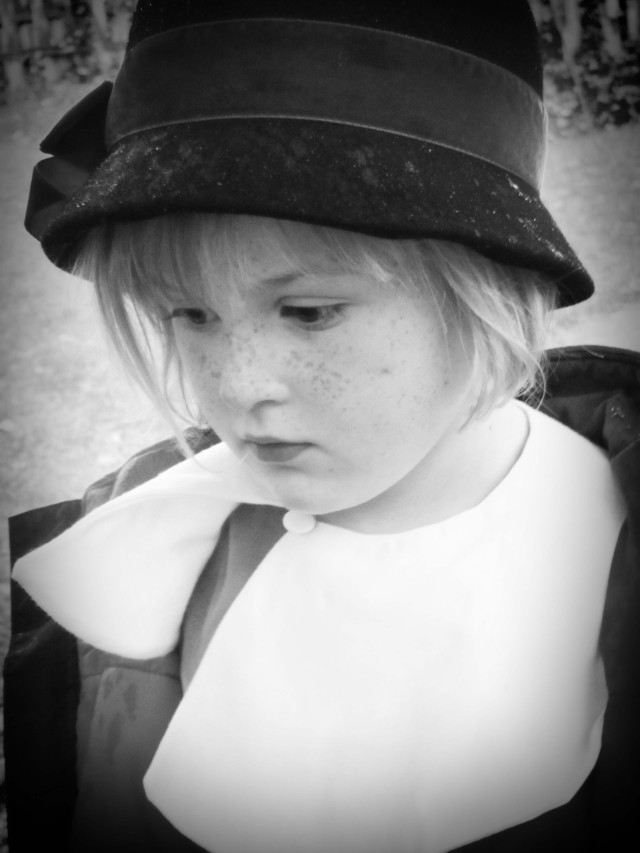 The kiddos made their own costumes.  We hit the local thrift store looking for leather as both Scout and LBG (Little Big Guy) wanted to go as Indians.  Eloise had a Pilgrim outfit that grandma had made a few years ago for Scout.  This is what we found for Scout. 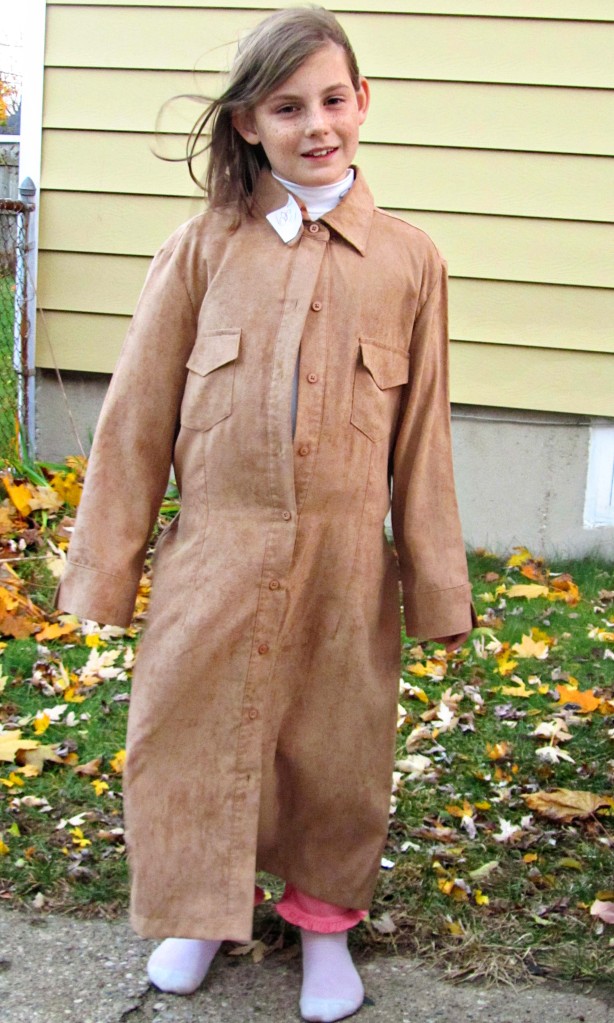 She removed the pockets and the collar.  Then she cut the sleeve and hem, then fringed each.  With the addition of some trim, a lucky-find-thrift-store-beaded-belt, a bracelet from the Dollar Store, a headband with a feather, and a beaded glass necklace,. . .

LBG also made an Indian outfit.

As he was sewing on the outfit he discovered that “all the buttons button backwards.”  “No wonder it was at the thrift store,” he said.  And the momma, she say nu-thing.

After a little of this–seam ripping. 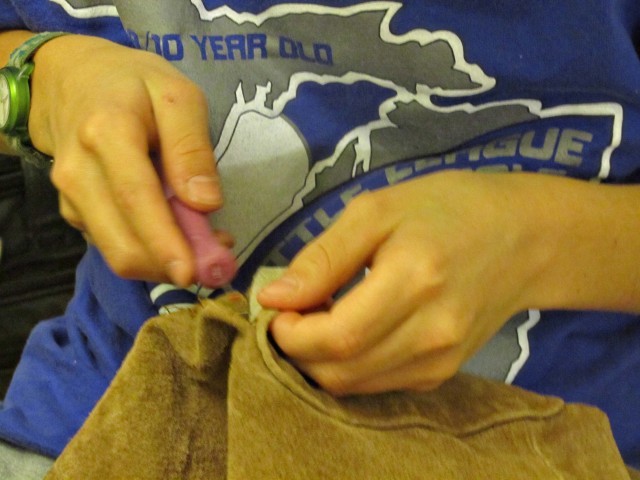 And a little of this–cutting.

And a little of this–sewing. 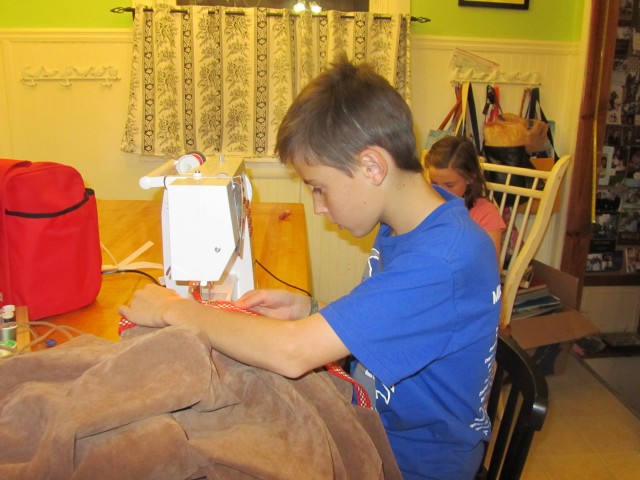 He ended up with this.

Which he of course got dirty right away.  After all, he is a boy.

Besides the outfits, the kiddos also made the Thanksgiving dishes.  Both Scout and Eloise made pies.  We tried to keep them more authentic by using lard and butter for the pie crust.  (I had never bought lard before in my life.) And the girls sweetened their pies with molasses instead of wonderfully-refined-tastes-divine-white sugar. Here is the pie making process.

Baking with Eloise and Scout. 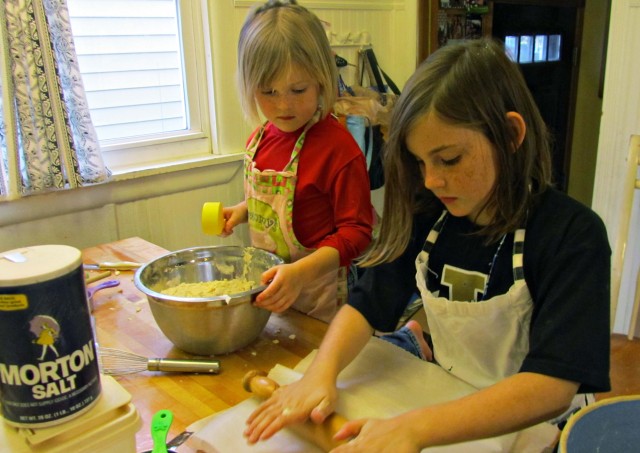 Scout mixes the ingredients, cuts in the lard and butter, adds cold water, and rolls out the pie crust. 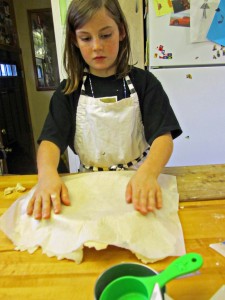 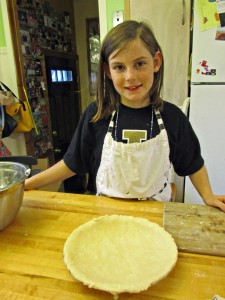 Now Eloise, on the other hand, she mixes the ingredients.

And pats the ingredients.

And then mixes and pats some more.  Finally, she rolls out the crust.

She has patted it, rolled it, kneaded it, so now she gets to cut and mark it, before throwing it in the oven.

One more pat-pat.  I sure love this photo of these grubby chubbies.

The final touch is the edging. 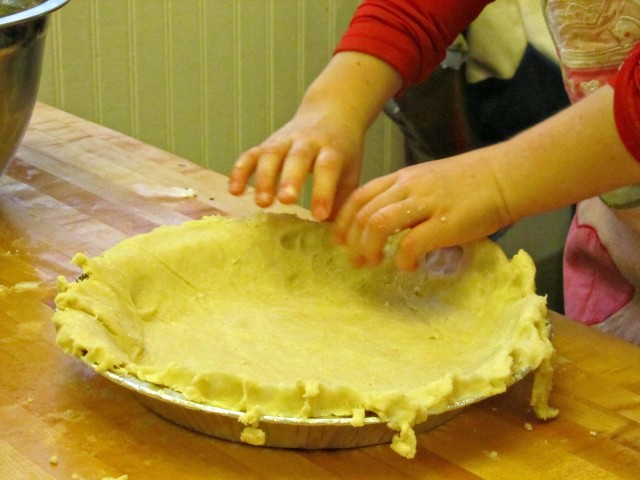 One final pat-pat, and she is ready to be done.  The Mommi had to add the apples and such. 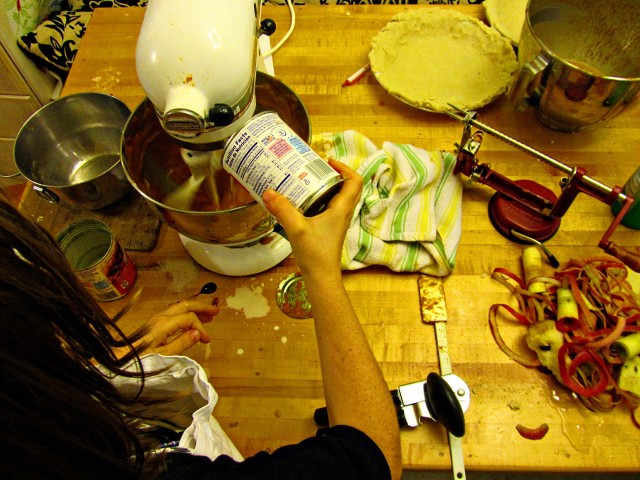 So what did LBG cook?  It was not his idea, but he dressed and cooked a duck.  Here’s some shots–not buck shot, photographs.  The last photo is of a duck that has been picked clean–not by turkey buzzards, but by kids.  The duck was a hit.  (Not the duck was hit.) 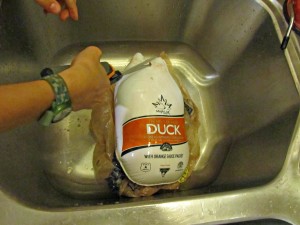 The day of our Thanksgiving feast arrived and it rained.  It even thundered.  It hasn’t thundered since late summer.  We had planned to eat on tables outside–like the original Thanksgiving, but had to move the party into the garage.  Thankfully, it had just been cleaned and organized for the winter.  This little Indian kept running out and playing in the rain. (Costume is compliments of Grandma.)

First we made butter.  Drop two or three sanitized marbles into a glass jar.  Add some heavy cream and a little salt.  Shake and jump and shake and jump for about 10 minutes.  All of a sudden, the thick mass will form into a ball, and release buttermilk.  Drain the buttermilk.  Shake a little more, and drain again.  Spread on cornbread and enjoy.

It took a bit, but was fun.

We also tried to cook some cornbread the kids made–Dutch oven style.

(Tarps are a Whitaker thing.  The Hunni is an expert on tarps.)

Here is the Dutch oven cornbread.  Takers anyone?  Actually, smeared with freshly made butter and honey, it tasted great.

We sat down to dinner and everyone’s authentic dish.

Along with the duck that LBG had cooked, we had Indian Pudding (very similar to Boston Brown Bread), Wild Rice with Cranberries, Succotash (corn and Lima beans for non-midwesterners), Baked Mini-Pumpkins drizzled with Maple Syrup, the Cornbread with Butter, plus an Apple and a Pumpkin pie (crusts made with lard and sweetened with molasses.)  Hot apple cider was the beverage.  Of course, since the kids had made the dishes they were more interested in sampling others dishes. 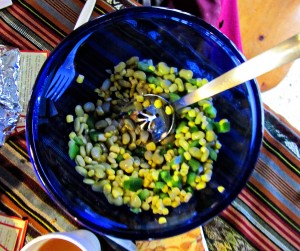 It was fun.  The rain didn’t ruin the event.

We tried to finish the day by popping popcorn over the fire. . . 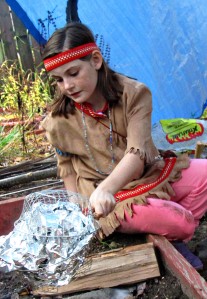 That was a Thanksgiving that really happened.

Rather a good one.

P.S.  We missed you Katie, hope everyone gets to feeling better soon.

This entry was posted in She said... and tagged homeschool thanksgiving. Bookmark the permalink.