Posted on February 3, 2012 by whitsendmom

We recently had a birthday around here (Recently meaning within the month.) You will  see two birthday cakes as Eloise was so sick at her birthday party (which she shared with her grandpa down in Florida) that we wouldn’t let her blow out the candles on the shared birthday cake.  We are very considerate of our guests that way. 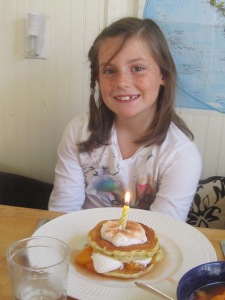 Scout choose to have a cupcake themed birthday party.  She made all the cupcakes herself.  I usually had to leave the kitchen, as I have a tendency to just take over in order to “hurry things up” and not leave such a mess.  When one grandma called and asked what to buy Eloise for her birthday, I selfishly suggested the cupcake holder.  I have wanted one for the longest time.  The cute cupcake table cloth is also from Grandma.  I look forward to using both of Scout’s gifts often.  🙂

Parties in this family often happen in stages.  We had some homeschooling friends over after ice skating, and then later in the day, some neighbor kids came over for more cupcakes and a little activity.

About two years ago, I thought that I would like to paint up a Princess Chair for my daughter’s birthday.  I thought it would be fun to give her her own throne in her room.  Since her room is very tight for space, since the budget was tight on extras, and since my clothes were very tight as I was expecting Number 4, nothing came of the great idea.  Nothing except that I kept my eye open for a suitable chair to paint.  I was thinking of a wooden chair that somehow I would find at a thrift store for a bargin basement price, but when I came across this IKEA chair, I thought PERFECT.

It is their SOLSTA OLARP CHAIR for approximately $65.00.  The fabric is white canvas which is what artists paint on all the time.  Artists add a gesso (plaster-like covering) first, so that their medium (stuff you add to oil paint to make it flow and dry) won’t eat away the canvas.

This SOLSTA OLARP CHAIR is comfortable for a child to sit in, but we ended up buying the TULLSTA chair for $99.00, as it is a very comfortable seat for an adult.

I brought out our collection of Sharpies and let the kids decorate the chair.  I had some rules–NO WORDS.  NO PEOPLE.  USE BRIGHT COLORS.  Here are some photos of the chair decorating.

Here is that first, somewhat scary, very permanent, mark.  Scout decided to copy a butterfly off a place mat of ours.

Here are Eloise’s first marks.  She had no inhibitions.  She also had no idea what she was going to draw, she just started.  That is the fun of being five.

The neighbors started adding their own drawings.  Believe it or not, both of these boys drew flowers. 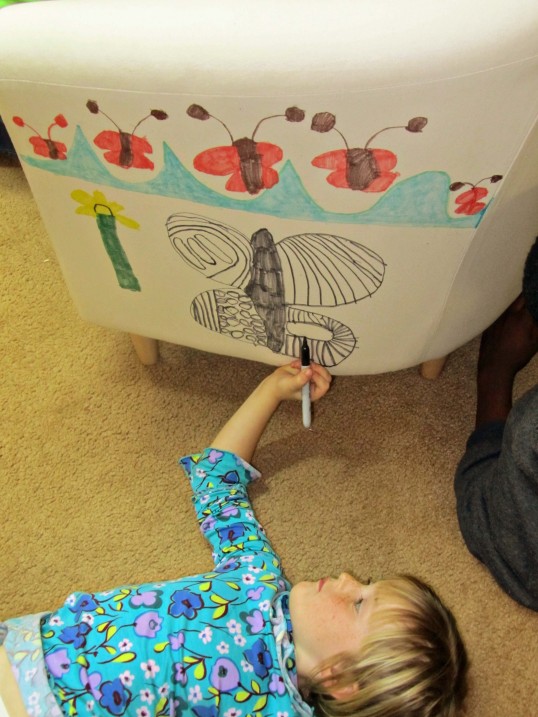 And No-Inhibitions Eloise added several of her own butterflies.  She preferred to draw upside-down. 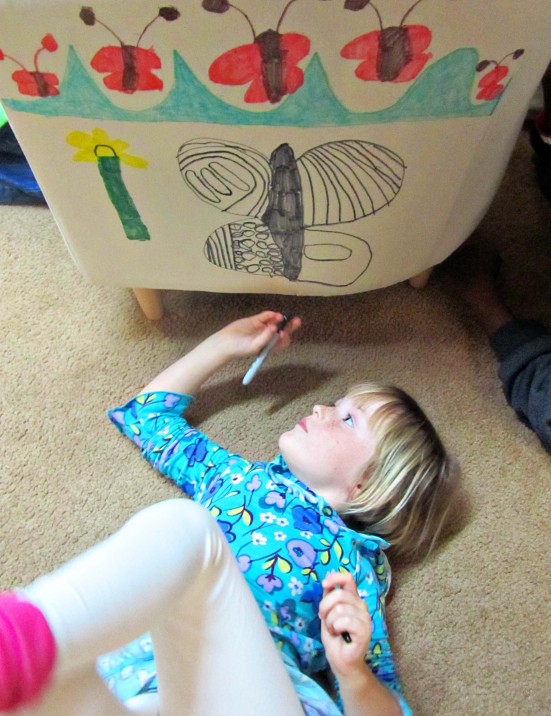 Although we began coloring the chair the day of the birthday party, it took about three weeks for us to finish.  Attention spans just aren’t long when it comes to coloring it seems.

I made suggestions like, “Why don’t you put long flowers up the front of the arms.  And then shorter flowers across the front.”  I would say, “Why don’t you add a ladybug or some ants or some other insect.” 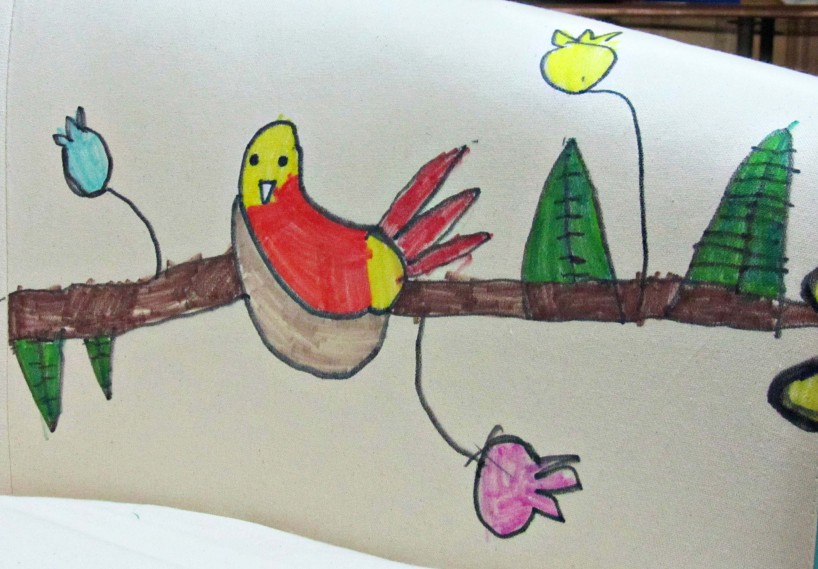 Eloise drew and colored this bird in a nest completely on her own.  What I would do is re-color in the areas that the kids colored.  I would also re-outline everything in a sharp black.  It gave everything some strong definition.

Work continued.  I had to get creative and add odd elements where ever Little Man decided to color.  He had been instructed not to several times, but he still managed to steal a pen and so some “damage.”

As we continued to draw, several themes developed.  The right side of the chair we titled, “Sweet Treat.” 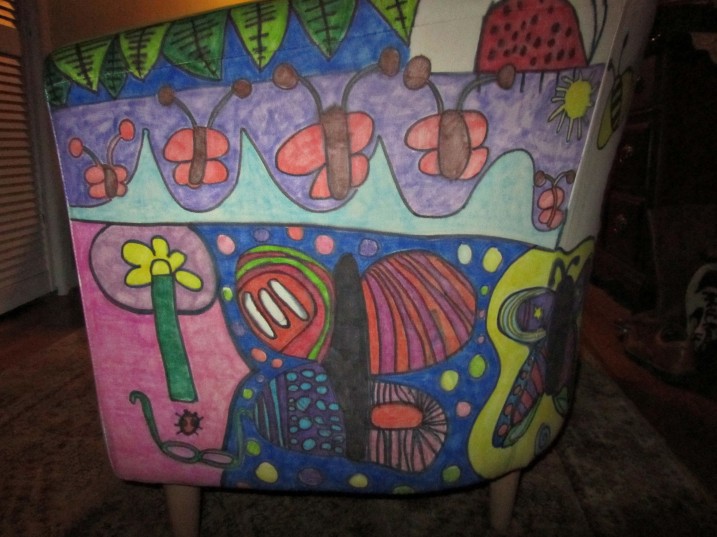 The left side of the chair was “Eloise’s Interpretation.”  The Hunni said it looked like a psychedelic tatoo, but to me it is all Eloise.

Apparently, I never took a photo of just the back of the chair, but here you can see the “Garden Theme.”

We bought two chairs.  I realized that a theme helped raise the artistic level of the chair, so for the second chair we used a “Cityscape” theme.  We also decided to keep the artwork within just the family.  LBG–Little Big Guy–who wasn’t interested in drawing on the first chair added a very nice airplane to the “Cityscape Chair.” Little Man added elements to both chairs, but we tried to cover up his work.

Here is the finished chair.

Here is a front view.  I’m sorry about the lighting.  It was taken in our room, and our walls are painted a deep red. 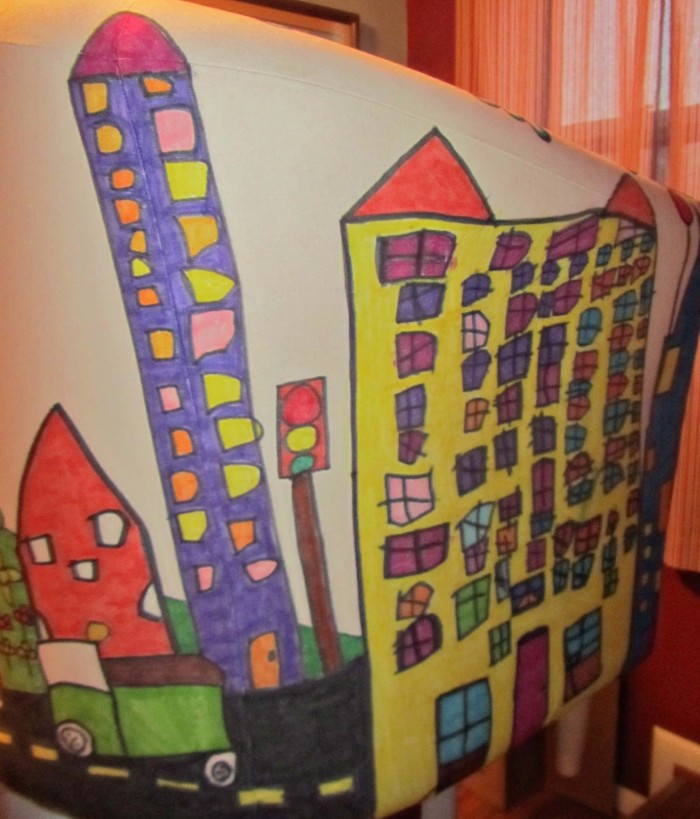 This is the right side of the chair.  Eloise drew the large yellow skyscraper.

This is the left side.

And this is the back of the chair.  Again, sorry about the lighting.

After we had finished drawing, I waited for a day above freezing, and then took the chairs out to the garage to give them two coats of Scotch Guard.

I learned the hard way, that if you spray the Scotch Guard too close to the artwork, the black sharpie has a tendency to run. 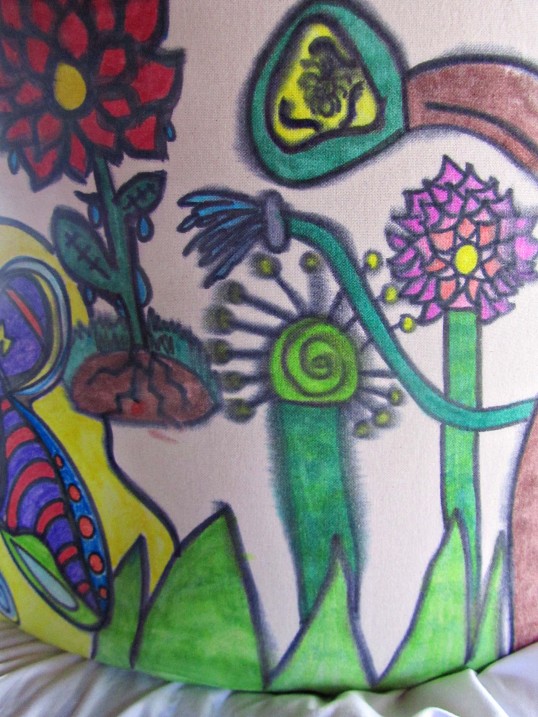 I didn’t spray so close on the “Cityscape Chair”, and I didn’t have any of the colors bleed or run.

If you ever want to do this project, here are a few things we learned.

Here are the two colorful characters that did most of the work.

We had visions of Scout starting a business on etsy selling these chairs, but they do really take awhile to make, and shipping them might be too expensive.  Add $ for the chair + $ for the markers + $ for the shipping + a little $ for the three weeks of labor, = I don’t know who would be willing to shell out the sheckles for an orignal kid work of art.  If you want one, though, we can make one for you.  We’d love to do an

Sorry for all the pictures.  A bit lengthy.  We had fun.

P.S.  The chairs had to seat adults for a reason, but more on that later.

This entry was posted in Projects and tagged decorated kid chair, decorating kid room, project for kids. Bookmark the permalink.