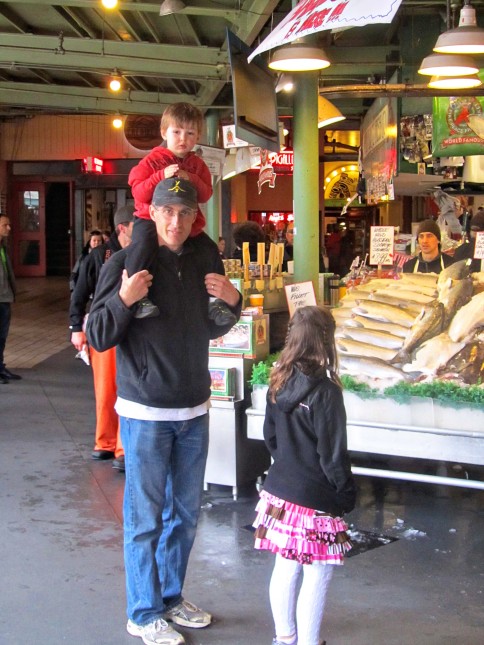 7:30 a.m.  The alarm went off.  Somehow seven-thirty really seemed like sleeping in!

8:30  We are on our way to downtown Seattle to meet up with Cory and Lisa (The Hunni’s sister) and Andy (brother) and Jennie for a breakfast of crepes.

9:00  We pull into a parking space under the Alaskan Way Viaduct.  In front of us there was a team of workers pulling out the trolley line.  Little Man was fascinated and didn’t want to leave.  Behind us was an antique store where my Mother-in-law, Jo, and I had once visited.  It made me think of Ted.

9:05  The Hunni still hasn’t figured out how the “pay to park” works, but no worries, the kiddos are all loving watching a trolley line being rip out and dumped into a truck.

9:11  We arrive at The Pig, only a few minutes behind schedule.  Uncle Cory and Mr. Adorable are there to greet us along with all kinds of fresh seafood.

If you have never been to Pike’s Place Market, it is a semi-indoors fresh market.  The most famous store is the fresh fish place where the workers throw the recently purchased fish to the guy who bags it up.

It is more than just a fresh market, it is a place to see Seattle.

Most of the gang and gaggle of cousins and aunts and uncles and kiddos were here, so we headed on down to THE crepes place.

And her is that place whose memory makes me close my eyes and dream of light savory bites of wonderfulness.

Now crepes would make any day wonderful, but add to that the company of people you love, and you get a perfect day.

Here the master crepe maker has just poured a crepe onto the maker and is spreading out the batter with this wooden thing-a-ma-gigger.  Within a few minutes he flipped the crepe onto the other side, and then loaded in the deliciousness.  The Hunni and I both split our and shared half of each, so that we could sample both a savory and a sweet crepe.

I couldn’t decide what to order when all of a sudden, I thought, “duh! You are in the Pacific Northwest.  Order salmon!”  And was it ever delicious.  The Hunni ordered strawberries and cream, and we both licked our forks.  Then we wished we weren’t in a restaurant so we could lick the plate.

The Hunni and I are both snapping a photo of our nephew Mr. Adorable.  You can check out his eyes and flirty lashes in the photo below. 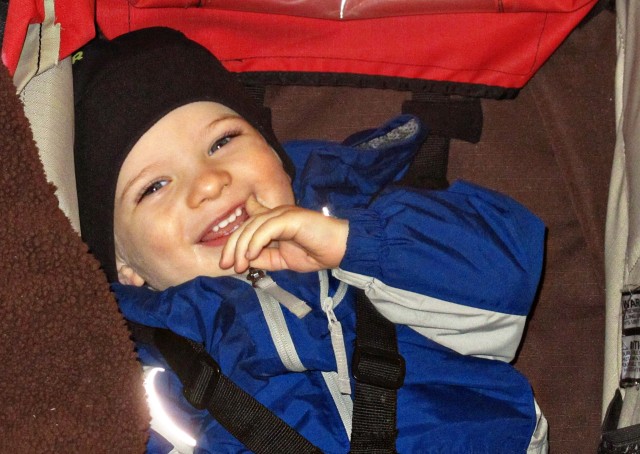 “They sparkle, they bubble, they gonna get you in a whole lotta trouble with them there eyes!”

Of course, a truly perfect morning needs a perfect cup of coffee.

A big, deep, rich, cup.  How did civilizations exist before coffee?

Just as we were finishing up, Andy and his family arrived.  We were in no hurry, so we just visited some more while they ordered.

This is my nephew.  Those slate grey/green eyes!!  Oh help!

Then we all walked around exploring the colors, sounds, and tastes.

Tulips!  Somehow, they are more perfect than any other flower.  I think it is their simple design–no extra ruffles and scent.  Simple.  Beauty.  Created by a Perfect Artist.

I don’t know exactly what words were exchanged, but I do know that Scout walked away with a bouquet of flowers that her Uncle Cory had purchased.

The produce is as original as it is beautiful.  What are Wild Ramps?

” Allium tricoccum – known as the ramp,[1]spring onion, ramson, wild leek,[1]wood leek,[1] and wild garlic – is an early spring vegetable, a perennialwild onion with a strong garlic-like odor and a pronounced onion flavor.[2] Ramps are found across North America, from the U.S. state of South Carolina to Canada. They are popular in the cuisines of the rural upland South and in the Canadian province of Quebec. Ramps also have a growing popularity in upscale restaurants throughout North America.”

And now a little nugget of knowledge about Wild onions (ramps) and the city of Chicago.

“A thick growth of ramps near Lake Michigan in Illinois in the 17th century gave the city of Chicago its name, after the area was described by 17th-century explorer Robert Cavelier, sieur de La Salle, and explained by his comrade, the naturalist and diarist Henri Joutel.[2] The plant called Chicagou in the language of native tribes was once thought to be Allium cernuum, the nodding wild onion, but research in the early 1990s showed the correct plant was the ramp.[2]”  from Wikipedia

I have “fiddle heads” growing in my backyard, but I always thought that they were poisonous.

“But before you run out to collect these little delicacies, be forewarned that the Center for Disease Control has found a number of outbreaks of food-borne illness associated with fiddleheads (nothing is simple, right?) But the outbreaks
occurred when the ferns were eaten raw or lightly cooked (as in sautéed, parboiled or micro-waved).  So…cook your fiddlehead thoroughly before eating them…boil them for at least 10 minutes.  After than, you can eat them right away, or freeze or pickle them. ”  http://www.theheartofnewengland.com/food-fiddleheads.html

But here they look so wonderful, if my kitchen wasn’t 2,500 miles away, I might buy them and give them another try.

After a bit of wandering and enjoying, we all crossed the road to see some cheese being made.

I sampled the cheese, and it was wonderful–tangy and mellow at the same time.  I thought about buying some, but I think my family would have revolted after four days in the car with a ripe cheese.

Cory and Lisa (The Hunni’s sister) had to go, but before they left, I captured this photo.  Just the photo I wanted.

On our way out of Pike’s Place Market, we stopped by this attraction.  Now I always thought of my brother-in-law Andy as being very tall, but next to the tallest man in the world, he looks rather average.

The rest of us decided that a ferry ride was in order.  It was such a perfect day, why not see take a ride.  I don’t know why a ferry ride is so much fun, but everyone seems to like it–both kiddos and adults.  I think it is just the magic of being on the water. 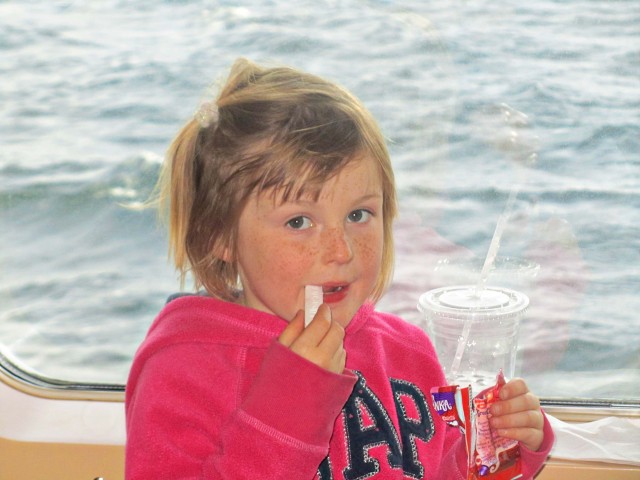 It is here that we introduced our nephew to Fun Dips.  You know, that pure sugar stuff with a tang to it where you lick a stick of candy and then dip it into powdered candy.

Aunt Jennie may hate us, but I think this little guy loved us–or maybe he just loved the Fun Dip.

It was cold and windy, but the sun was out.  We piled out to watch the ferry dock on the other side.

It was time for the shift change.  Here the ferry workers are getting off and being replaced by a new crew.  I think we went to Bainbridge Island, but we only disembarked onto the ramp and rode back right away.

On the way back we visited.  It was just enjoyable to be together on a beautiful day.  We also had a great view!!!

OPPS!!  Maybe he was dreaming of a great view.

Here is the view we enjoyed.

No ferry ride is complete without a trip to Ivar’s.  Ivar’s is a fish and chips, water-front, stand.

We all ordered clam chowder, as that is our favorite thing to order at Ivar’s.  I have never been able to get my clam chowder to taste the same.  I think if I knew the amount of butter and cream added to the chowder, I wouldn’t enjoy it quite so much.  However, on this day it was the perfect lunch.

The sea gulls along the water front love to steal your food.  Here are the kiddos watching the gulls inside the heated outdoor eating area that is also sea-gull proof.  It is not, however, bum-proof, and The Hunni got hit up for some cash.  The establishment said that he was a regular.

Somewhere along the way I lost track of the time.

As we walked back to our car, we stopped by Ye Olde Curiosity Shop that sells postcards, exhibits mummies, sells Mexican Jumping Beans, exhibits shrunken heads, sells T-shirts, exhibits a mummified dog, sells cheap necklaces, exhibits The Lord’s Prayer on a grain of rice, sells pens with your name on it, exhibits Siamese-twin calves, a narwhal tusk, and a 67-pound snail, and sells umbrellas.  We had given each of the kiddos $20 on the first day of the trip.  They hadn’t had a good opportunity to spend any of it, so we stopped into this store.  They all came out with a new treasure.

On the drive back to his parent’s place, The Hunni pulled off at the exit for his old house–the house he grew up in.  We pulled into the driveway and rang the doorbell as a former classmate of his is renting the house.  I had to stay in the car as Little Man had fallen asleep, but I did get to peek into the front door.  It was odd to see someone else living in the house where I first met The Hunni.  It was also extremely gracious of The Hunni’s classmate to invite us in.

Then we drove back to The Hunni’s parent’s current home where they had a supper waiting for all the crew.