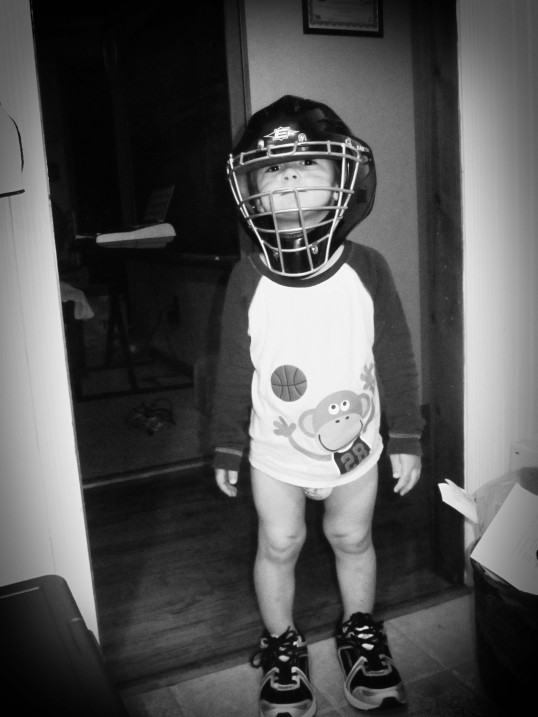 BASEBALL OPENING DAY!!!  Hooray!  This family loves baseball.  The teams have to be lined up at 8:30.  Ugh! an early morning Saturday.  The truth is, we are all still tired from our trip West.  Soccer practice ran late last night, so therefore so did supper, and showers, and bedtime.  Again.

I had great plans of getting everyone up and out the door, but when I saw the sleeping kiddos, and knew how hard it was for me to get out of bed, I just let them sleep.  We had a big day ahead of us with three soccer games and a 6:00 evening baseball game.  So I dropped LBG (Little Big Guy) off at the field with his cell phone, waved to a few parents I knew, and left him there.  I drove back home to coffee.  I missed Opening Day.

This is not the first time I missed Opening Day.  Two years ago, I was VERY pregnant.  In fact, I had to stop the car on the way to Opening Day as I felt the nausea coming on.  I got the car door opened just in time, even through we were still rolling.  I was about three weeks away from my due date, and thought that maybe I was going into labor.  Nope.  Just sour stomach.  Now I knew that Scout was sick, but we all had to get in the car and go to Opening Day.  It started raining, then stopped, and was a Sauna instead.  I took Eloise with me to watch the opening ceremony, but left Scout in the car as she was not feeling well.

The ceremony seemed to take forever to get started, and when I finally got back to Scout in the car, she had a rash.  I felt her, and she was burning up.  LBG had a game, so I hailed a parent on the team, mentioned that I was heading to Urgent Care, and could she please watch my son.  At Urgent Care, they said, “Scarlet Fever.”  I dropped off the prescription for antibiotics at our pharmacy on the way home, but they said it would be half an hour before it would be ready.  LBG’s game was just ending.  Well, it was almost ready to end.  It was begining to end.  But baseball innings when the players are nine years old last forever, so Scout had to wait “forever” before I finally was able to get back to the pharmacist and pick up her prescription.  This is how life runs with a single mom 50% of the year in a city far, far, from family.  Thank goodness for friends.  And great neighbors who watch my kiddos.

So you see, I didn’t have the heart to wake up Scout.

LBG was dropped off by some friends, and by that time it was time to leave for soccer.  The soccer games were at 10:45, 12:45, and 1:15.  We need half an hour to load the car with the gear and get there on time, and we have to be there half an hour before the game for warm up, so that meant leaving the house at 9:45.  I can handle 9:45.  Besides, these were the first games of the season so everyone still knew where their uniforms, cleats, and shin guards were.  This in not the case later on in the season.  To date, I think that was the only game where Eloise had a matching pair of shin guards.  The rest of the season, she wore various sizes and shapes and colors of shin guards. 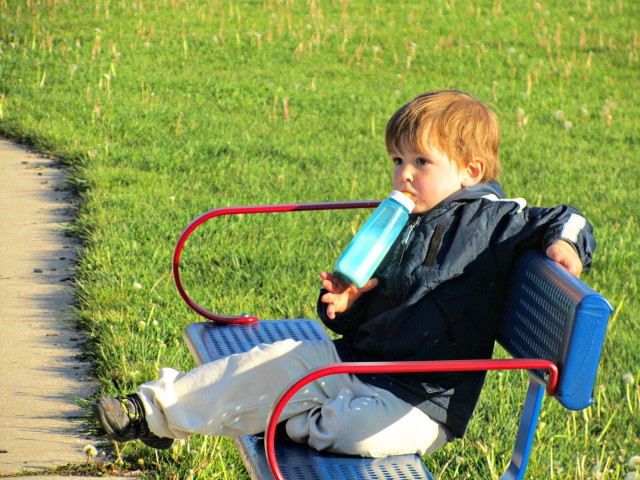 Little Man woke up at the soccer field with his bottle, and I woke up with a second coffee.

I had prepared for soccer/baseball season by making up 15+ calzones and freezing them.  Once made, from freezer to finished they take a whole hour of cooking at 350, but a hot meal on the field tastes wonderful.  I just put them in a shoe box with some towels and hand them out as the kiddos get hungry. 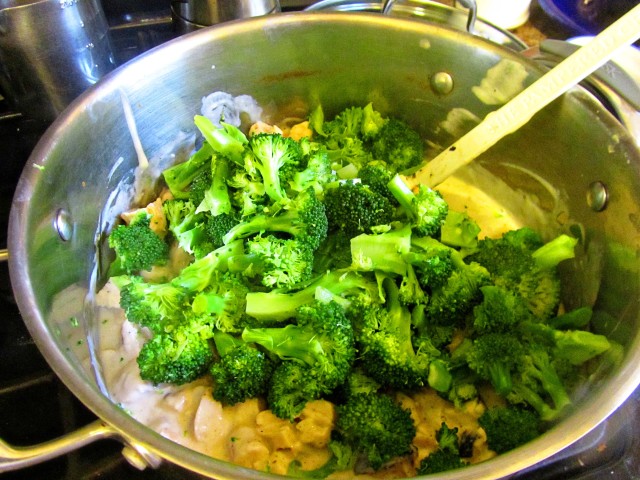 I made broccoli and chicken in a cream sauce (store-bought Bertolli).

This is a staple in my pantry for many “hurry up” meals. 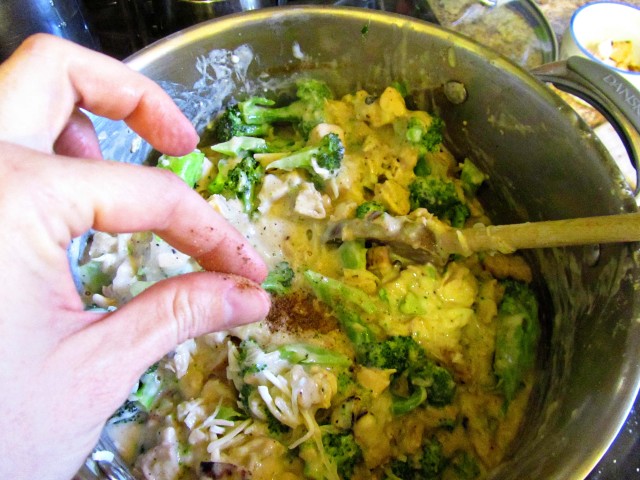 I cooked up some chicken and steamed broccoli, then added cream sauce,  mozzarella, and nutmeg to the pot. 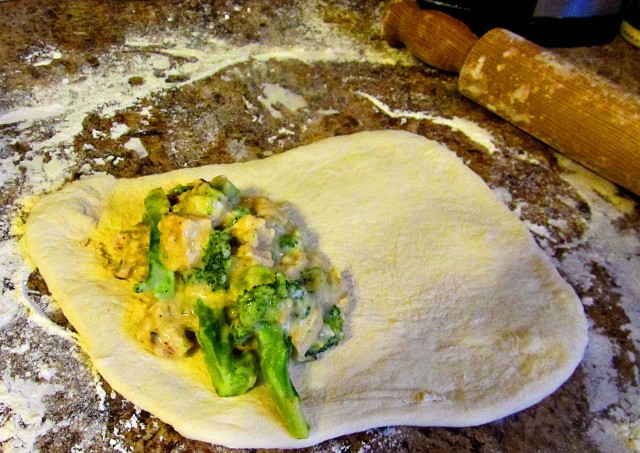 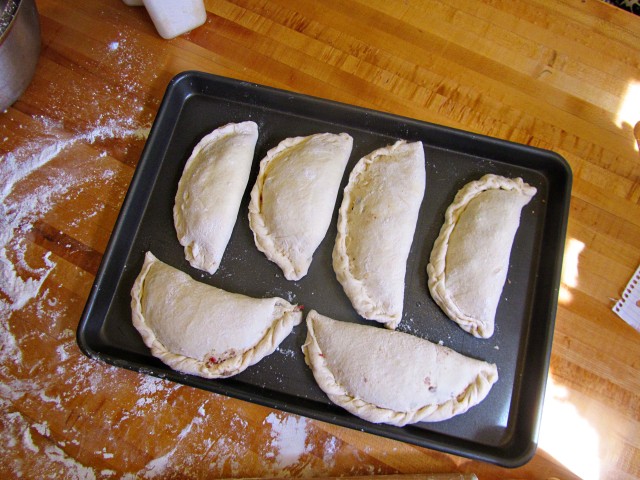 I froze most of mine “uncooked”  (Everything is cooked except the bread dough).  I laid them on a cookie sheet and froze them overnight, then. . . 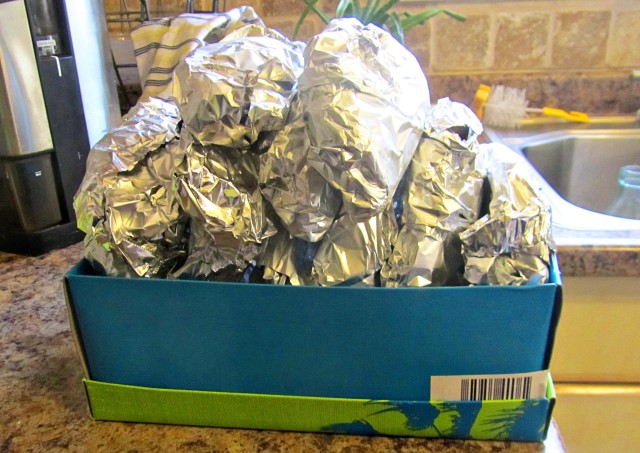 . . .wrapped them in foil and put them back into the freezer (in a shoe box) for future use. 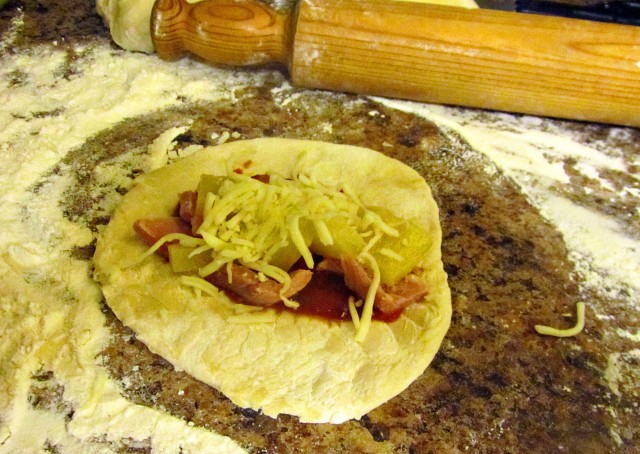 I also made Pinoeer Woman’s Calzones from her first cookbook and Hawaiian Pizza Calzones, as that is my kiddos favorite pizza–Bertolli marinara sauce, ham, canned pineapple, and mozarella.

That was lunch for us at the soccer field.  The kiddos liked the Hawaiian Calzone the best, The Hunni the Broccoli and Chicken, and the Mama the Meaty PW Cowboy Calzone.  (I tried to add a link, but she must not have the recipe on her blog–only cookbook.)  Here is an AllRecipe link for a calzone.

Soccer ended with Scout getting invited over to a friend’s house and a friend of LBG coming over to our house.  I headed back home to cook.    Sunday morning was going to come quickly, and I wanted to be ready.  I decided to cook APPLE DUMPLINGS (pg. 234) 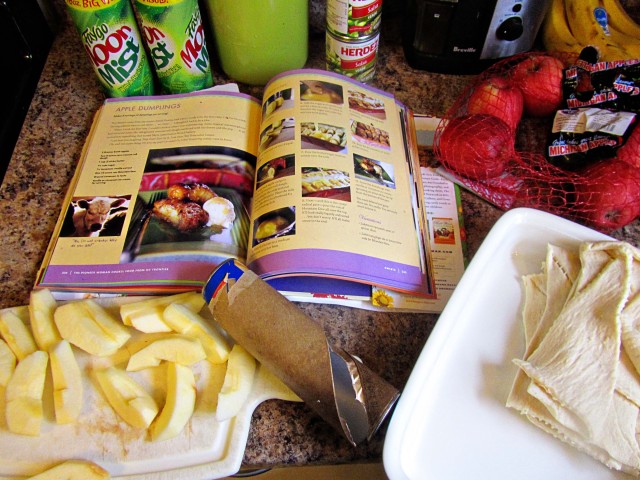 Life at My Whit’s End means that I find it very hard to actually follow a recipe exactly–it is partly our crazy life and partly my independent personality.  So here is part of my challenge of “Rebecca On Ree–the Cookbook Challenge”.  I’m going to be graded.  It is the teacher and the competitive streak in me.  And YOU are going to be the judges.  I’m not sure if I will ask a specific person to judge or just accept your comments and grades in the Comments section, but either way, you get to judge.

Here is my first confession.  I bought Reduced-Fat Crescent Rolls.  This was actually unintentional, just is what I threw into my overflowing grocery cart. 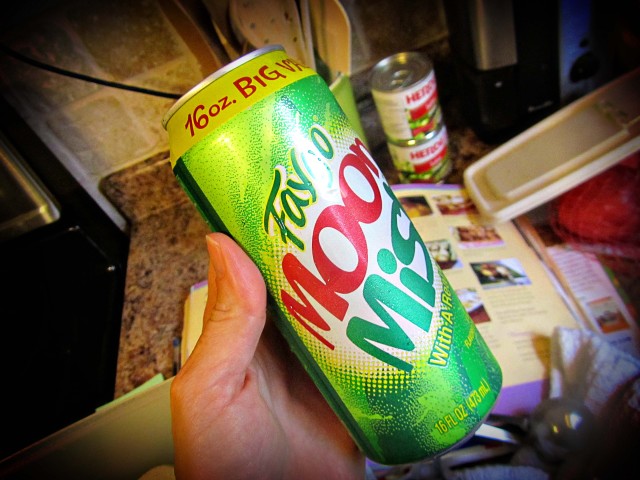 My second confession is that I used this–Faygo Moon Mist instead of the Mountain Dew suggested in the recipe.  It also was a 16 oz. can instead of the usual 12 ounces.

For lunch I put on some canned tomato soup and started grilled cheese sandwiches.  I also started the meat for CARNITAS PIZZA (pg. 150)

And it is while I was flipping over the roast I was browning that the accident happened.  The roast slipped off the fork, and splashed grease and meat juice everywhere.  I tried to “land” the falling roast and ended up knocking the tomato soup pan.  I now had tomato soup everywhere–including on the cooking grillled cheese sandwiches.  And my boy had a friend over.  So I cut up the grilled cheese sandwiches into triangles and hid all the triangle on which tomato soup sloshed.

The soccer friend didn’t notice and the tomato soup and grilled cheese sandwiches all disappeared.  WHEW!

It was now time to drop off kids and pick kids up.  I put the APPLE DUMPLINGS in the oven and hoped that I would only be gone the 40 minutes that they needed to cook. 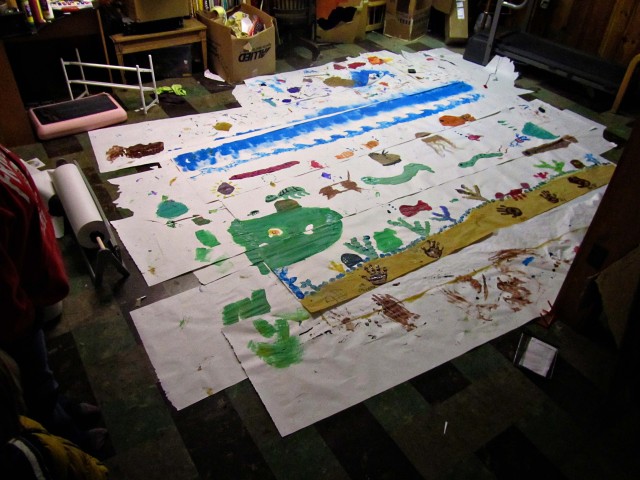 The soccer girls had decided to paint an epic mural, so they covered the entire basement in paper, and painted an under-the-sea scene.  They also painted their toes.  And the bottom of their feet and walked around.  And their hands for handprints.  Overall, a Lascaux Cave masterpiece–a cave (basement), group project, and handprints.   That’s the teacher in me coming out. 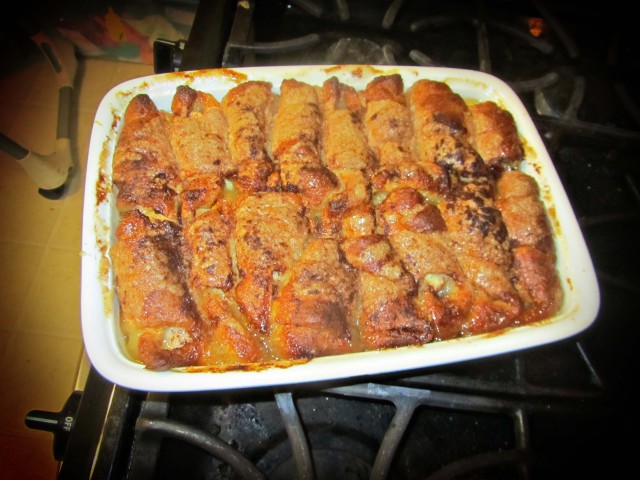 I met the 40 minute deadline, and pulled out these APPLE DUMPLINGS.  I wanted to snitch, but they were for Sunday morning breakfast.  We quickly hustled off to baseball for the first game of the season. 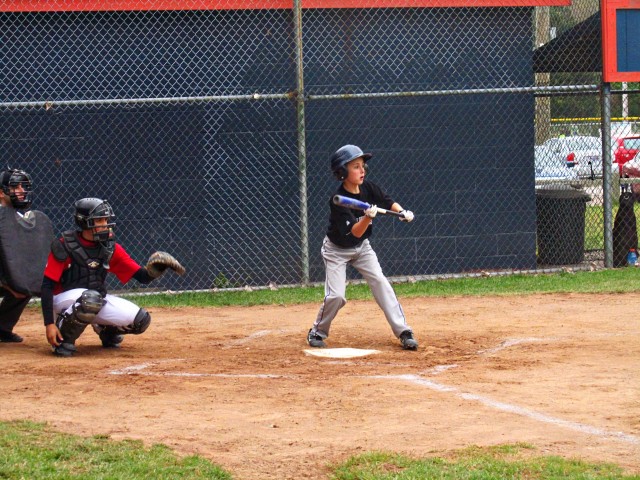 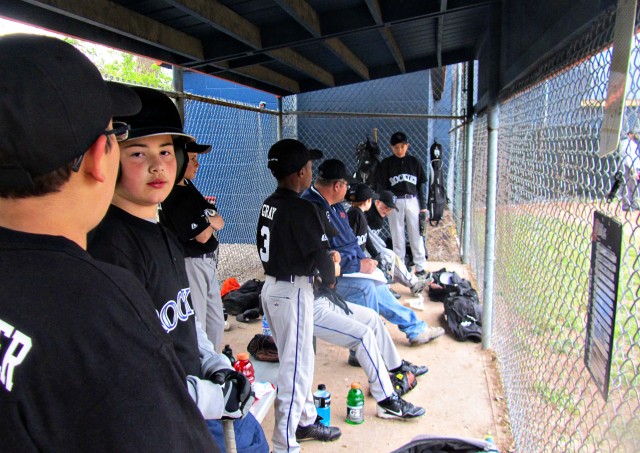 The baseball dugout this year sounded different.  I couldn’t put my finger on it at first, but I finally realized that the team was all into the game!!  They were growing up!  Even last year, half of the team would have been goofing off, knocking off each other’s hats, eating Sunflower Seeds and spitting them, drinking volumes of Gatorade,  spitting Gatorade very near the other person’s cleats, trash talking, tough talking, etc. . .

We had a great first game.  We have great coaches.  We had a perfect May evening.  And it topped everything off when we won.

The CARNITAS PIZZA ROAST smelled wonderful, but it needed two more hours to really be ready. 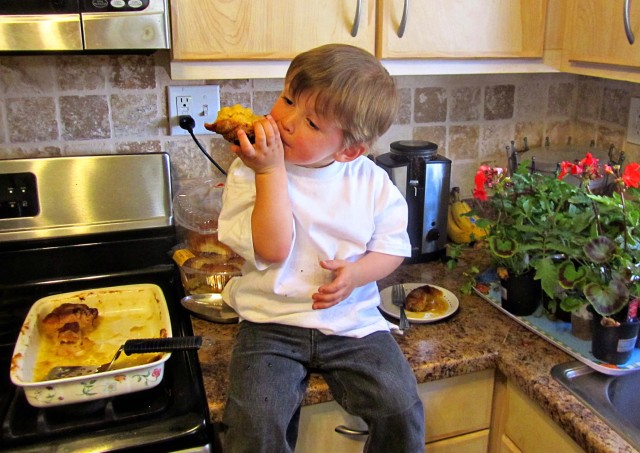 The APPLE DUMPLINGS called out our names. 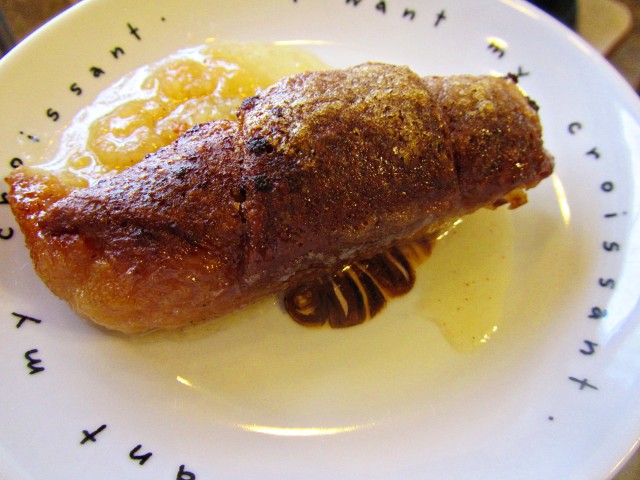 Baths followed and soon the kiddos were “all nested in bed, with a sugar high from APPLE DUMPLINGS, they danced in their beds.”  But not for long as they were exhausted. 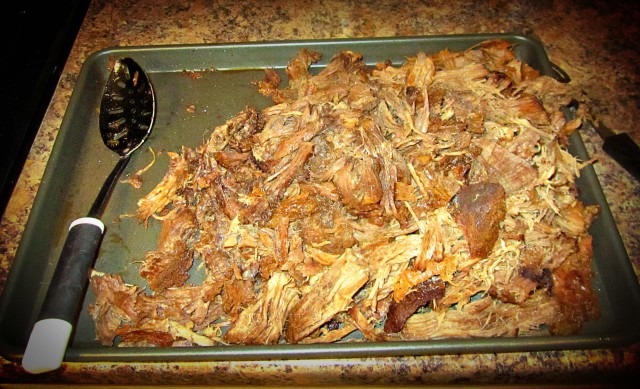 But her day wasn’t done.  I “pulled” all the roast, and then set it back in its juices. 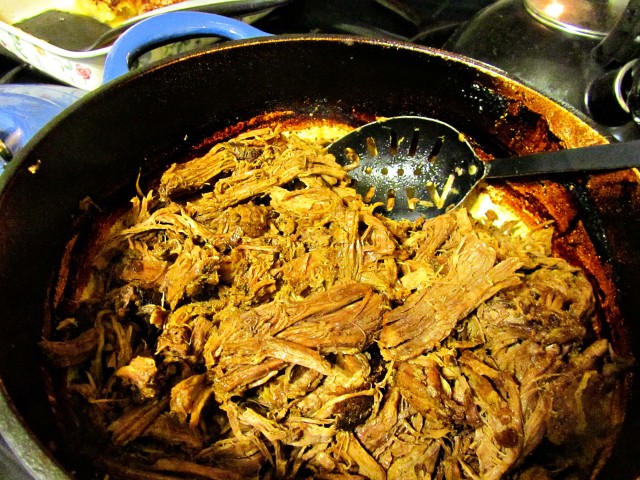 The roast tasted wonderful.  In fact, I decided that I would serve it as Sunday Dinner with mashed potatoes and gravy.  We may have eaten up my Breakfast, but I had Dinner.

So that is my first day of Rebecca on Ree–the Cookbook Challenge.

Comments:  The APPLE DUMPLINGS were very easy and good.  I forgot to add the 1 1/2 cups of sugar to the recipe and in no way missed it.  I also didn’t use Granny Smith apples as I only had Gala.  The recipe could definitely use the tartness of Granny Smiths.  A bit too sweet for me, but I can see this recipe working for this Whit’s End family with a little less butter and sugar.  Maybe just do the crescent rolls with the can of Mt. Dew.  I’m going to try that next time.

And now for the grading.  How did I do?  Did I pass?  Here are the categories.  Following Directions, Cooking Methods (steps that got me to the end), Presentation, Overall Impression, Creativity.  Each category will be worth 4 points.  A = 4.0,  B = 3.0 B – = 3.0, C = 2.0, D = 1, F = failure.  If I don’t get a passing grade, then I will have to repeat the recipe.  So, what think ye?  This time it will be a general grading by all.  Add my overall grade to the comments section or break it down into categories.  Or you can add one of those famous teacher lines like, “disruptive in the kitchen, but plays well with others at baseball.”