Around these parts, we often eat Breakfast for Supper.  Everyone loves it.  Especially the Mama as it is easier to cook than a four course meal and easier to clean up.

We were also tired.  We had a baseball tournament over the weekend, and we had lost.  Somehow losing makes everyone more tired.  I say we had lost in that we didn’t win the tournament, and this team is used to winning the entire thing.  We looked like a bunch of individuals and not a team.

Top it off, we had to come home from the tournament to a regular season rescheduled game.  Remember that game that got canceled on my birthday?  Tonight was the make-up night.

Nothing tastes better when you are tired and worn out than FRENCH TOAST. 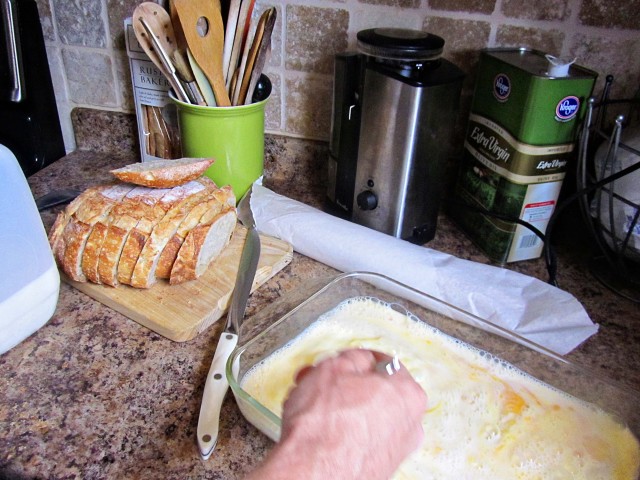 Now The Hunni made up some FRENCH TOAST out of a sour dough loaf, while I made the BERRY BUTTER (pg. 28).  He didn’t exactly follow Pioneer Woman’s recipe, but I wasn’t about to say anything.  I appreciated the help in the kitchen and wasn’t about to nag.  The plan was to get the FRENCH TOAST soaking, set the table, basically have everything ready, then head to the make-up game.  Upon return, we could all begin eating within a few minutes. 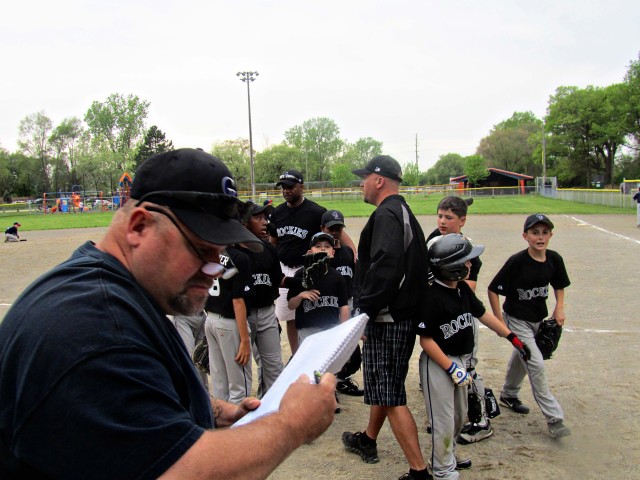 We headed to the baseball game armed with the usual:  baseball bag, second baseball bag for catcher gear, lemonade for the team, cups in a Ziploc bag for the team, bag of toys for Little Man, three folding chairs, two blankets, sweatshirts for everyone because this is Michigan and evenings get cool, water bottles for everyone, one milk bottle for Little Man, extra diapers, my purse, and one stroller on which everything is hauled to the playing field and back.  I really think there would be a market for a “Sport Equipment Lugging Stroller.”  A collapsible stroller that was specifically designed to carry coolers, folding chairs, duffel bags of gear, umbrellas, a cup of coffee, and that could also allow a child to ride on the rare occasion.

I forget why LBG (Little Big Guy) was at the fence, but it was probably to beg for a Gatorade or a Cheesy Pretzel.  And we probably said the usual, “No.”

Here is LBG playing catcher.  This is what he did during the game. 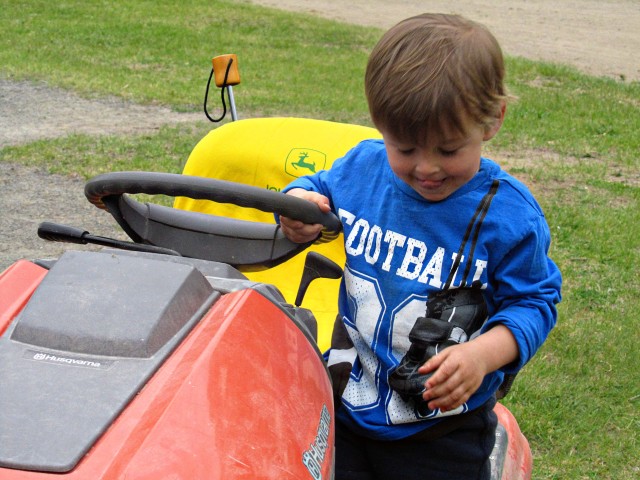 Here is Little Man on the lawn mower.  That is what he did during the game.

Here are the girls and their friends playing ?Roman Chariot??  That is what they did during the game.

And here is The Hunni, and here is what he did during the game.

And the Mama?  The Mama kept her eye on everyone.  In flying this is refered to as “doing your scan.”  Try to watch LBG when it is his turn to bat, try to make sure the girls don’t put the rope around anyone’s throat, try to keep Little Man from playing in the very large and very tempting mud puddle, try to keep my stomach from rumbling too much as I was thinking about the FRENCH TOAST WITH BERRY BUTTER. 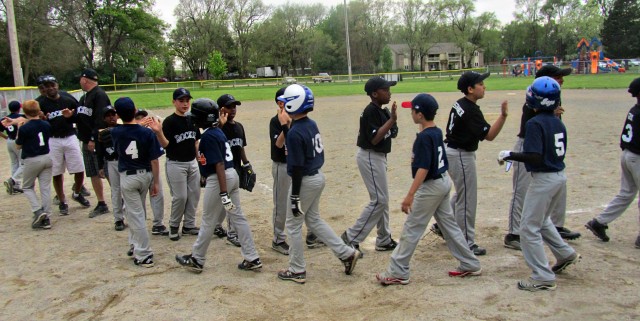 The game ended with a tie.  This is big, as this team is the team to beat.  About winning and losing:  We have been on winning teams, we have been on losing teams, we had a year where we started at the bottom and ended up in second place, we have had good coaches, and we have had great coaches, and we have had years where we learned other lessons on the playing field. It is kind of like a mini lesson in life.  Sometimes the guy you are trying to strike out is your best friend.  Sometimes the guy that gets you out is your former teammate.  It is a game.  It is intense.  We don’t play “for fun”.  We play to win.  But when we win, we remember that, “It is a game.”  And when we lose, we remember, “We got to play, and playing is fun.”

That is my soap box for the day.  Let’s hurry home to some FRENCH TOAST WITH BERRY BUTTER.  The berry butter is made by just softening real butter and adding raspberries or blackberries.  Mix everything in a Kitchen Aid, then cool.  Ree Drummond made hers into logs that she wrapped in aluminum foil.  This makes cute little round pats that you can add to the top of your FRENCH TOAST.  I didn’t have the energy, so I just put mine in ramekins.

The FRENCH TOAST WITH BERRY BUTTER was delicious.  The ONLY time our dinner table is quiet is after a game when everyone is very busy getting food to his or her mouth as quickly as possible. 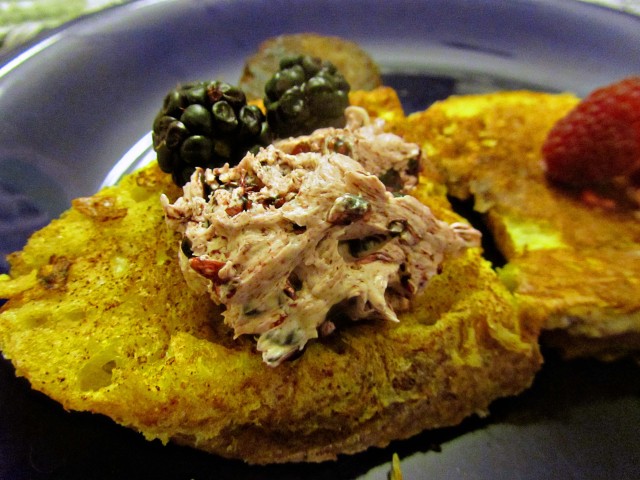 The BERRY BUTTER looked so much like whipped cream that I heaped it on like I would a dollop of whipping cream.  We served the FRENCH TOAST with the left over berries.

I couldn’t decide if I like the raspberry butter or the blackberry butter better, so I had to have another bit of berry butter. (That Betty did not buy, nor was it bitter.)

And if you are a Little Man this is how you eat raspberries.

COMMENTS:  Excellent!  Love it.  I ate the left over BERRY BUTTER on muffins.  The only problem is that I added twice the amount of butter I normally add, as it was so good.  The recipe is easy.  The BERRY BUTTER can be made ahead and probably even frozen as butter freezes nicely.  It is hard to keep berries around here at My Whit’s End, as the kiddos eat them on the way home from the grocery store, snack on them between meals, and love them just plain.  But next time we have some berries on hand, I might make up some more.  FRENCH TOAST is a staple in our diet.  I buy all the “day old” loaves of sour dough bread I see and freeze them.  We use them for french toast, soup boulles, and open faced toasted cheese sandwiches (usually served with a soup.)  I think BERRY BUTTER would be a good thing to make in the fall, when muffins abound.  It would also be great for a brunch.

I wish I could add, “Bring on the grub,” but most of us live too far away for a shared meal.  Thanks for stoppping by to share a virtual meal.  You might have enjoyed it more than being at our table as we might have made scarfing noises.

This entry was posted in Recipes and tagged cooking ree drummond's cookbook. Bookmark the permalink.