Today is July 9.  Today my oldest boy vacuumed out the car because we had just gotten back from a trip to The Farm.  Today was warm, so I rolled down all the windows on the van so he could get some air while vacuuming.  Today, my youngest son (2 years) was playing with the garden hose because he wanted to stay cool.  Today my oldest son finished vacuuming out the car and came inside.  Today, my youngest son decided the opened windows were an open invitation to fill the car with hose water.  Today I yelled at my kids.  Tomorrow, I will probably yell at them again if the van smells.

The COWGIRL QUICHE (pg. 34) that I made late last night tasted great at 4:00 a.m. in the morning, when I had to get a bottle for Little Man.

The COWGIRL QUICHE was good for breakfast, although the kiddos opted for cold cereal.

And the COWGIRL QUICHE was good for lunch when I served up left over burnt PORK LOIN to the rest of the family, while I opted for COWGIRL QUICHE.

After a Sunday dinner of burnt PORK LOIN for the kiddos and COWGIRL QUICHE for the mama, I decided I needed a dessert.  VANILLA BEAN ICE CREAM (PG.266) and KNOCK YOU NAKED BROWNIES (pg. 260) sounded good.

It never ceases to amaze us how much math is involved in cooking. You’re looking to create something with a fat content of 10% to 12%, up from 3.5% for whole milk and less than 1/2% for skim milk. Heavy cream weighs in at 36% to 40% butterfat. If you use whole milk, mix 3/4 cup of whole milk with 1/4 cup of heavy cream to approximate half & half.

The proportions aren’t substantially different if you use skim milk because even a small amount of heavy cream adds a lot of fat, but mixing 2/3 cup of skim milk with 1/3 cup of whipping cream will bring you within the right range for half & half. (from http://www.ochef.com/902.htm)

Here is a graph of all milk products.  Click on this link to take you to a graph that is larger. After adding 2 cups of sugar, Pioneer Woman’s recipe says to “split open a vanilla bean. . .”  I do not have a vanilla bean.  I realize that this officially makes me average, normal, not interesting,  comfortable, mid-west pudgy, and generally not cuisine cooking cool.  This is all true.  I just added 2 teaspoons of real vanilla extract.  Here is an interesting blog article about the differences between vanilla extract and imitation vanilla.  Vanilla extract is made by soaking a vanilla bean in alcohol–the vanilla flavor is extracted.  Simplistically speaking, imitation vanilla is made from clove oil and spruce trees.

Since I doubled the recipe, I made VANILLA BEAN ICE CREAM with the first batch. . .

I added two of these Starbucks Via Instant Coffees, tasted the mixture, then added two more (4 total).  We like our coffee on the strong side, so add one at a time, and I think you will get the strength you like.

“Player: “Why you do your hair that way?”  Response:  “Leave me alone.”  Player:  “Well, it better than what you didn’t do to your hair yesterday!!!!”  Bwahahahahah–all the players laugh.

In reference to his good shot:  “That shot was toned!!”

In reference to a ball being rebounded after a shot:  “That’s my change!”  Meaning, “That ball is still mine.”

In reference to a player doing better than another player:  “Oww! He beat’n you up!”

Before I start on the BROWNIES, though, I had better do some dishes.

With enough of the dishes washed to give me some sink space again, I started on the BROWNIES.

These brownies could be called Turtle Brownies as they contain the same layers of nuts and chocolate and caramel that chocolate turtles have.

The recipe is unique in that it uses a cake mix and evaporated milk for the two brownie layers.  The first layer is cooked before adding the caramels and the second brownie layer.

In my 14 oz. package of caramels, I only had 50 caramels instead of the 60 suggested for the recipe, so my caramel sauce was a little runny.  Once cooled, however, the caramel hardened to a creamy solid. 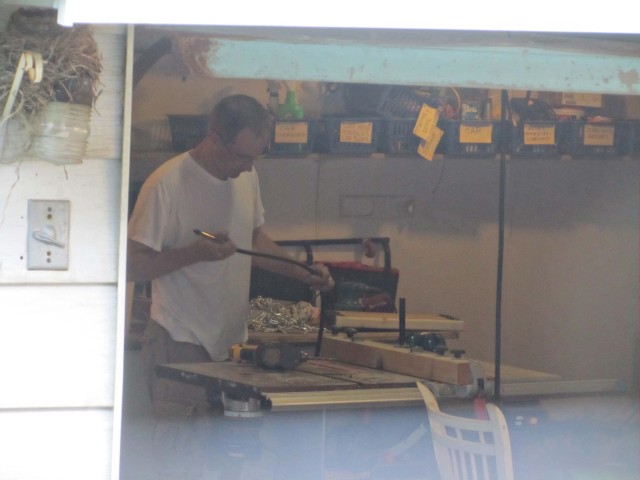 When the BROWNIES came out of the oven, I read the next step in Food From My Frontier Cookbook.  It read, “Cover the pan and refrigerate the brownies for several hours. . .”  ALLOW TO COOL FOR SEVERAL HOURS!  You have got to be kidding me.  I don’t think so.  Instead, I called in The Hunni from his favorite place (the garage) and the kiddos from the yard.

And we went ahead and cut into the BROWNIES. (This morning, this was a Sunday-go-to-meeting shirt.  I don’t know if I will ever be able to use it as such again.)

They were soft and sweet and salty and nutty and everything a perfect brownie can be.

On my second brownie I added COFFEE ICE CREAM and  oohhhed and aahhed and mmmmed my way to the very last bite.

My notes never mention cooking supper.  I doubt that I did.  They do mention that I had dishes to wash up.  Again.

COMMENTS:  I love Quiche.  I am the only one in this family that does, so I don’t make it that often.  They do like frittadas (crustless quiche-kinda), so we often have them for a Sunday supper.  The COWGIRL QUICHE was delicious, if a bit rich.  I ended up freezing half of it to enjoy later.  Homemade ice cream is a summer favorite around here.  Pioneer Woman’s VANILLA BEAN ICE CREAM is a classic.  Truth is, I would love to have vanilla beans in my pantry.  Maybe I can find a way to fit them into my grocery budget.  The COFFEE ICE CREAM was devoured by both man and beast, so I believe it will often be repeated.  The Via is a super easy way to make the coffee ice cream strong without adding liquid to the recipe.  And in regards to coffee, I follow Lance Armstrong’s philosophy, “Live strong.”

Thanks for stopping by.

This entry was posted in Recipes and tagged cooking ree drummond's cookbook, how to make half and half. Bookmark the permalink.