May was heating up.  I wanted to cook this BEEF STEW (pg. 165) before it got too hot. I wanted a meal that we could come home from soccer practice and a baseball game and have table ready in 5 minutes. 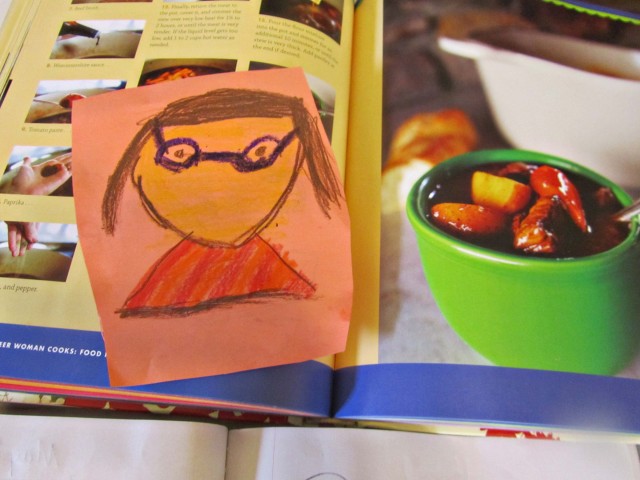 As I was cooking our beloved neighbor , Mrs. Thelma, came by.  She wanted to show us her new dress that she wore to her one and only grandson’s wedding the past weekend.

As if on cue she mentioned that she had several bottles of beer in her frig that she had bought for her house company.  “Good beer, too.” she added.  I was just going to omit it from my BEEF STEW that I had started cooking, but instead I found myself with a free bottle of “good beer” the very day and moment I needed it.  “Like a good neighbor, Mrs. Thelma is there.”

The beef I used was just slightly frozen.  Slightly frozen beef is easier to cut.  If you ever need really thin slices of beef, freeze it for a few hours.

I didn’t have New Potatoes, and my Russet potatoes were a bit grumpy looking, but that is one of the great things about a stew.  After several hours of cooking grumpy potatoes and happy potatoes look about the same.

I accidentally added 4 tablespoons of Worcestershire sauce instead of the 1 suggested in the recipe.  I added the tomato paste and then the paprika.  What is paprika anyway?  And what is the difference between regular paprika and Hungarian paprika?  If I had to guess I would guess that paprika is dried, sweet red peppers that have been pulverized.  Let’s ask Google and find out.

“Paprika is a spice made from ground, dried fruits of Capsicum annuum, either bell pepper or chili pepper varieties or mixtures thereof. In many European languages, the word paprika refers to the Capsicum fruit itself. The seasoning is used in many cuisines to add color and flavor to dishes. Paprika can range from mild to hot. Flavors also vary from country to country.”

The various shapes and colors of the capsicum fruit used to prepare paprika.  (from Wikipedia)

Psst.  Those big words “Capsicum annuum” just mean a pepper as in a bell pepper or a hot pepper.  (from Rebecca) I wasn’t that far off on my guess.  Let’s learn some more. What is Hungarian paprika?  I learned from Wikipedia that Hungary is a large producer of paprika.  In fact, the word has its etymological history in the Hungarian/Serbian languages.

“In Hungary there are six classes or types of paprika ranging from delicate to hot. To maintain the stronger taste that consumers expect, some spice companies add cayenne to heat up Hungarian paprika. Commercial food manufacturers use paprika to add color. If a food item is colored red, orange or reddish brown and the label lists “Natural Color,” it is likely paprika. Paprika releases its color and flavor when heated. Thus, sprinkling ground paprika over colorless dishes may improve their appearance, but does little for their flavor. Similarly, if you want to color the contents of a dish, stir the paprika into a little hot oil before adding.
Read more: http://www.food.com/library/paprika-335#ixzz20FzdfHsD

“Like all capsicums, the paprika varieties are native to South America. Originally a tropical plant, it can now grow in cooler climates. In Europe Hungary and Spain are the two main centres for growing paprika peppers, though these varieties have evolved into much milder forms than their tropical ancestors. Hungarian paprika is known as stronger and richer than Spanish paprika, which is quite mild, though through controlled breeding they are becoming more alike.”  (from The Encyclopedia of Spices) And here is one more nugget of knowledge.  “Much of the vitamin C content is retained in paprika, which contains more vitamin C by weight than does lemon juice.[9]

Paprika is also high in other antioxidants.[10] Prevalence of nutrients, however, must be balanced against quantities ingested, which are generally negligible for spices.”  (from Wikipedia).

But tempered with this fact, we can’t depend upon paprika for our daily vitamin C intake.  “Attributed Medicinal Properties–Fresh red peppers have more than seven times as much vitamin C as oranges, but the very high heat of modern drying destroys much of the vitamin C in paprika. It is however, an excellent source of betacarotene, that the body converts to vitamin A. ”  (from The Encyclopedia of Spices) And yet one more nugget of knowledge.  “Paprika is an emulsifier, temporarily bonding with oil and vinegar to make a smooth mixture for a salad dressing.”  (from Encyclopedia of Spices  http://www.theepicentre.com/Spices/paprika.html)

There you have it.  Paprika 101.  Now we know that some cheese may even have paprika in it for coloring, and that Hungarian paprika is just a general class of paprika, and that we have to heat paprika for the flavor to come out, but that heating the paprika destroys much of the Vitamin C it contains.

Back to BEEF STEW.  The stew calls for 2 tablespoons of sugar.  I grabbed the sugar bowl instead of my large Tupperware container of sugar as 2 teaspoons should be available in my sugar bowl.  Then I remembered that it was empty.  I had used up the last of the sugar in my coffee, yesterday.  I took off the lid anyway, and lo and behold, it had been refilled.  It could only have been The Hunni.  It is funny how it is the little things in life that spell out “L-O-V-E-D.”

One more note.  PW’s recipe calls for adding the potatoes two hours after the beef has started cooking.  Don’t be like me and cut the potatoes up right away.

Supper was on the back burner, but it was time for lunch.  Lunch was going to be an outdoor affair, so I made some CORN CHOWDER (pg. 73)

Everyone in this family loves CORN CHOWDER.  I usually follow Martha Stewart’s recipe and just add those fun to eat “Lil’ Smokey Links” from Hillshire Farms or Eckrich.  I have tried the generic brands and UGH!  I stick to brand names when it comes to sausage and bacon and links.

I used frozen corn that I had “put up” last year.  Then came the time to add the cream.  Once again, I didn’t have what I needed. 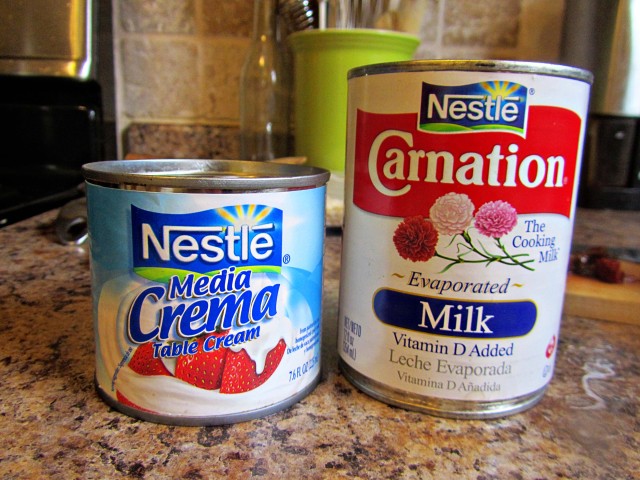 Here was my Crema Delima.  Pioneer Woman’s recipe calls for 1 1/2 cups of heavy whipping cream.  Making all that ice cream had cleared out my stock of cream.  Then I remembered that I had a little Evaporated milk left over from the KNOCK YOU NAKED BROWNIES recipe.

The only other change I made was using 3 tablespoons of Maseca instead of the cornmeal suggested in the recipe. 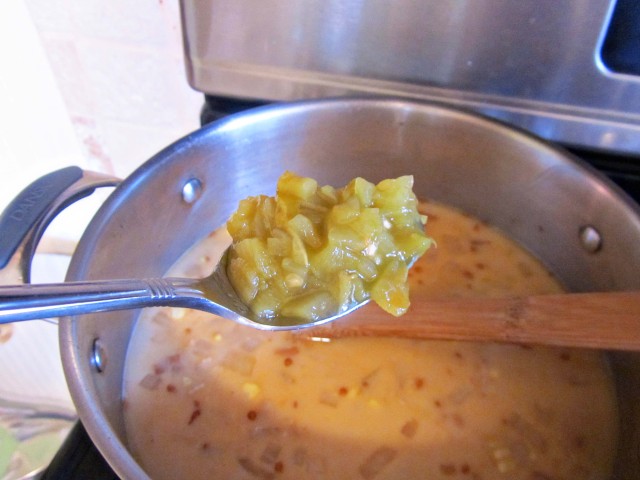 When adding heat to her recipes, I have learned that Ree Drummond can handle more heat than this Whit’s End Family.  Instead of the entire 4-ounce can of green chilies, I only add this heaping tablespoon.  Even that one tablespoon was a bit much for the younger kiddos.

While the CORN CHOWDER was cooking, I heard clomping overhead.  That means that my shoes are being borrowed.  I went up the stairs to see some lovely ladies in my attire.

That flowered dress is one of those dresses that I am hanging on to, hoping that I will some day be able to wear it again.  It was my “going away” outfit from my wedding.

These two girlies love to look through my closet.  And if you were wondering if I have any skeletons in my closet. . . 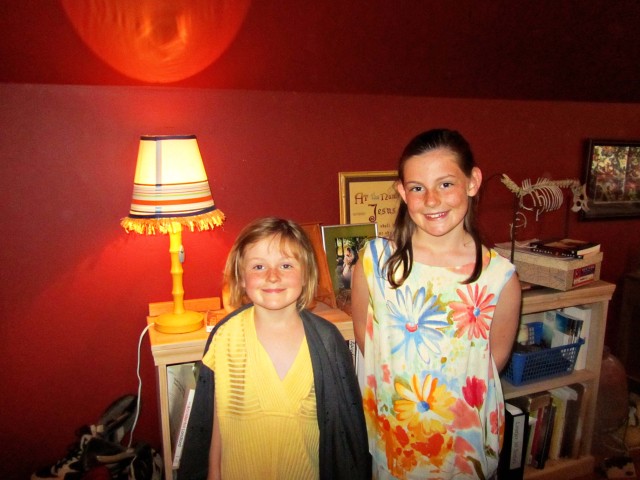 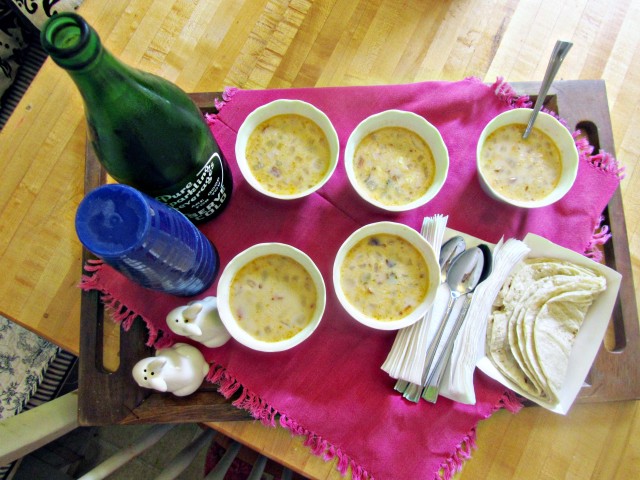 The CORN CHOWDER was ready, so we prepared a tray to take outside. 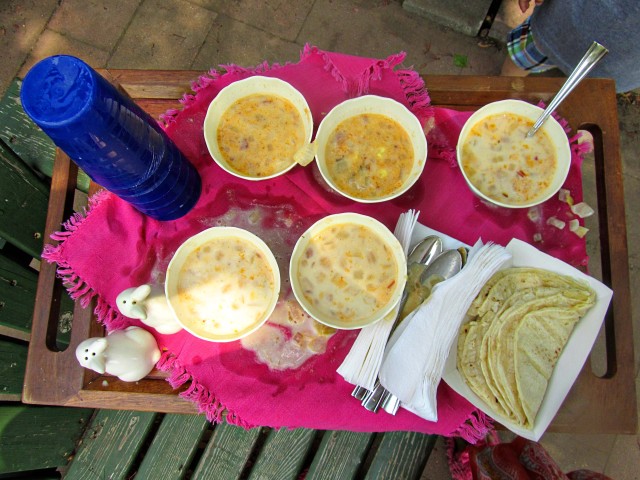 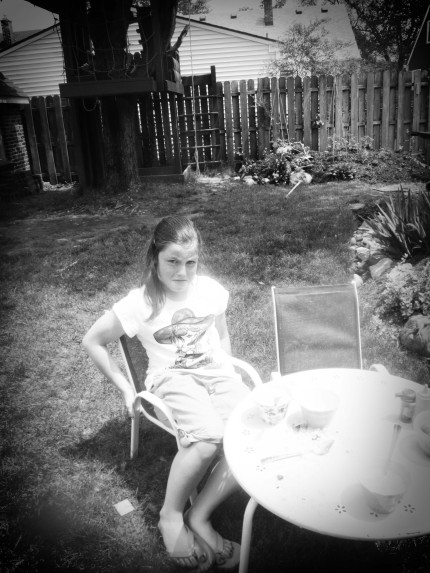 Lunch was eaten in the backyard, as The Hunni was still working on the outdoor grill.

Have you ever read the book, A Year in Provence?  It is about a British couple that move to Provence and remodel their kitchen.  The book is about all the meals they cooked and their kitchen remodel.  And there is one table in their remodel that takes the entire year to finish.  Each week it is scheduled to be completed and each week there is a different reason why it is not.  Behold our “table”.  It is now July, and it doesn’t look much different.  And each week there is a good reason why it can’t be completed.

Well, Provence may have some gorgeous scenery, but it can’t beat this.

The day ended up being the first that our A.C. kicked on.  I wondered what in the world I was doing cooking BEEF STEW for supper. 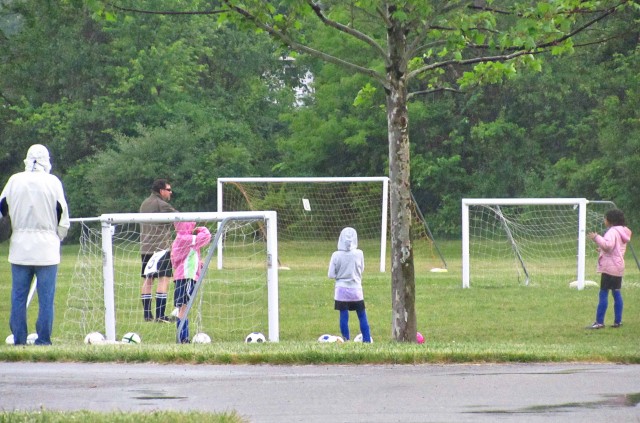 As we arrived at soccer practice, it started to drizzle and the temperature began to drop. 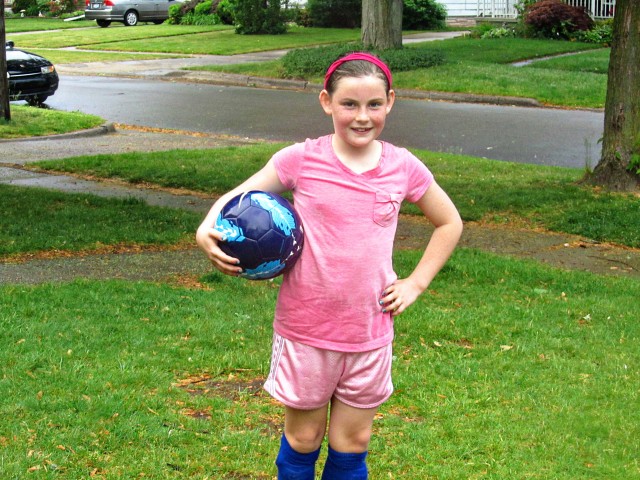 By the end of practice, Scout was completely wet. 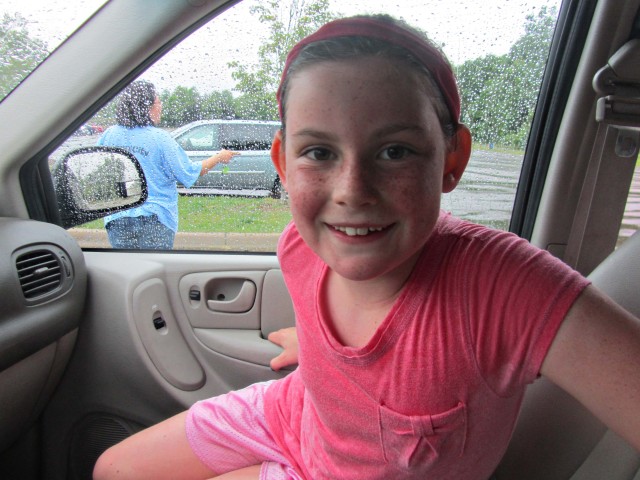 Who would have thought that the first day our A.C. kicked on would be the perfect day to have BEEF STEW for supper.  Here are Scout’s soccer shoes. 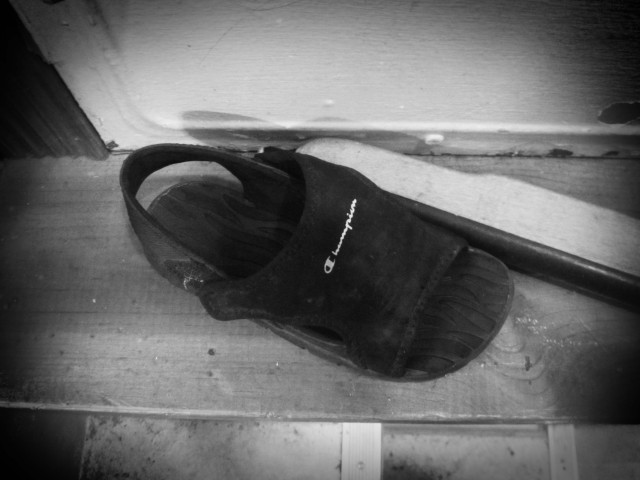 And here is Little Man’s shoe.  We usually only can find one shoe at a time.

And that is the end of another day in the life of this Whit’s End Family.

This entry was posted in Recipes and tagged a year in provence, cooking ree drummond's cookbook, paprika. Bookmark the permalink.