Colds in the summer always seem so unfair.  Thankfully, each hour that passed I felt better and better instead of the other direction.

Guess what?  There is a baseball game tonight.  I know.  It is hard to get excited about baseball every night of the week, but that is my life.  Here it is July 11, and the team just won their first game of their District Play-Off.  Each win means we continue to play.  Which means our summer vacation plans are on hold.  Win enough games, and we don’t go to the lake.  Lose two and we get to go to the lake.  Unusual odds. 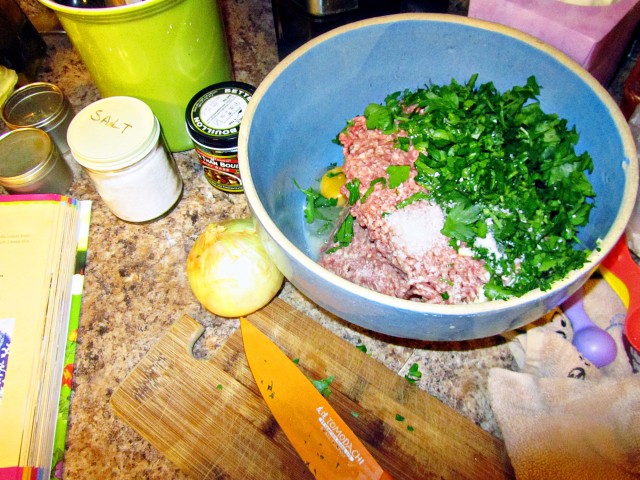 But let’s head back to May 23 when I cooked ITALIAN MEATBALL SOUP (pg. 79).  This soup sounded so good for a summer cold/allergies.  I actually didn’t start cooking this soup until after supper.  We went to visit a friend in her new house and then came back and finished up mulching all the gardens.  This morning, I never thought that I would have the energy to haul 20 bags of mulch around, but that pedicure cured most of my ills.

The only new ingredient that Ree Drummond added to her meatballs is 2 teaspoons lemon juice.   Seemed reasonable, so I followed the directions.

This is why I sometimes cook late in the evening–interruptions.  If I had browned these meatballs sometime during the day, THAT would be the time that the Kirby Salesman would stop by.  Since I am not the type to just slam the door, it would have taken me several minutes of saying “no thanks, I don’t want a free carpet cleaning.”  And by then, the meatballs would have burnt on one side.  Or I would have had to deal with a bloody nose as a result of full contact neighborhood basketball, and the smoke alarm would have gone off.  Or Little Man would decide to run off down the street and I would run around the block looking for him and my meatballs would have fried into black golf balls.  I just can focus better when all the kiddos are in bed.

Even without any interruptions, the meatballs stuck a little.  I decided not to try to cook the meatballs all the way on the stove, but just to brown up the outsides.  Then I put all the meatballs in the oven at 350° while I made the soup.

The broth is beef stock with herbs.  I love summer and the fresh herbs I can snip right out my door and window.  Pioneer Woman’s recipe called for bay leaves, peppercorns, and parsley.  I had tarragon, sage, rosemary, parsley,  and basil growing, so I made my bouquet garni using them.  It bothered me that I was missing the bay leaf.  I wondered.  Could I also grow bay leaves in my backyard?

Bay is also known as laurel.  Bay laurel [lauras noblis] is different from California laurel [umbellularia californica]  Both can be sold as “bay leaves”, even thought they are not in the same plant family.

Umbellularia californica is a large tree native to coastal forests of California and slightly extended into Oregon.[1] It is the sole species in the genus Umbellularia. It was formerly known as Oreodaphne californica.[2]

Its pungent leaves have a similar flavor to bay leaves (though stronger), and it may be mistaken for Bay Laurel.

In Oregon, this tree is known as Oregon Myrtle, while in California it is called California Bay Laurel, which may be shortened to California bay or California laurel. It has also been called pepperwood, spicebush, cinnamon bush, peppernut tree and headache tree,[citation needed] mountain laurel,[3] and Balm of Heaven.[  (from Wikipedia)

This is a bit of a long quote about true bay trees, and requires you to think back on you highschool Greek mythology, but it is interesting, so I included it.  Dust off that Greek Mythology Book in your brain and walk in.

The bay tree is indigenous to Asia Minor, from where it spread to the Mediterranean and then to other countries with similar climates. According to legend the Delphi oracle chewed bay leaves, or sniffed the smoke of burning leaves to promote her visionary trances. Bay, or laurel, was famed in ancient Greece and Rome. Emperors, heroes and poets wore wreaths of laurel leaves. The Greek word for laurel is dhafni, named for the myth of the nymph Daphne, who was changed into a laurel tree by Gaea, who transformed her to help her escape Apollo’s attempted rape. Apollo made the tree sacred and thus it became a symbol of honour. The association with honour and glory continue today; we have poet laureates (Apollo was the God of poets), and bacca-laureate means “laurel berries” which signifies the completion of a bachelor degree. Doctors were also crowned with laurel, which was considered a cure-all. Triumphant athletes of ancient Greece were awarded laurel garlands and was given to winners at Olympic games since 776 BC Today, grand prix winners are bedecked with laurel wreaths.  (from Encyclopedia of Spices)

Unfortunately, I won’t be able to grow a bay/laurel tree in my backyard.  However, if you live in California or another “Mediterranean climate” you could–(Zones 8 – 10).  This site gives advice on growing your bay tree in a container.  If you have a green thumb, you could grow a bay standard indoors despite your zone.  Bay trees actually like to be “pot bound” and you can leave them in the same pot for six or more years.  If you would like to start your own bay tree, you can buy 10 seeds on Ebay for about $3.00.  However, bay seed can take up to 6 months to germinate.  Here is a website where you can buy a potted plant for $32.98.  Just remember that fresh bay leaves are bitter and need to dry for 48 – 72 hours before using them.  Wal-Mart also sells them, but they are usually made of silk.  Please don’t use those leaves in cooking.

This broth needs to simmer for about 20 minutes, so I used that time to cut up all the vegetables.  This recipe calls for carrots, celery, russet potatoes, and cabbage.  I had some sad-looking celery and some skinny carrots, but my robust cabbage made up for it.

I added the meatball once the veggies had all cooked and Viola! the soup was finished.  I had a bowl even though I had already eaten supper. 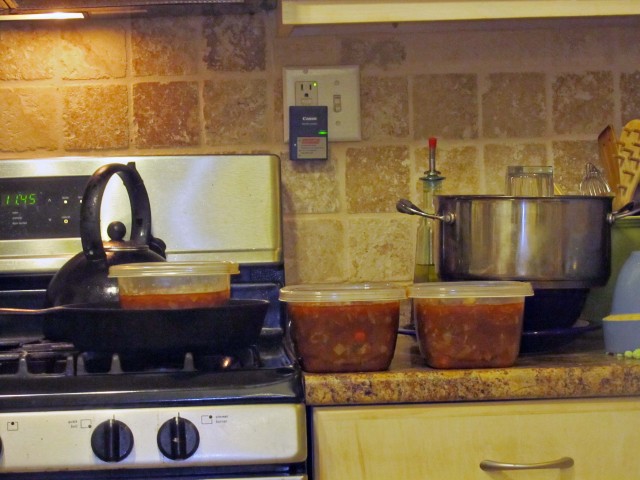 I doubled the recipe, so I could freeze some for later.

COMMENTS:  I think I will add ITALIAN MEATBALL SOUP to the list of soups we love in the winter.  I might try replacing the diced potatoes with some small pasta–such as the Ditalini pictured below. (photo from http://www.recipetips.com/glossary-term/t–35245/ditalini-pasta.asp)

Although if you are serving a meal to a Gluten-Free Friend, this soup will certainly please. 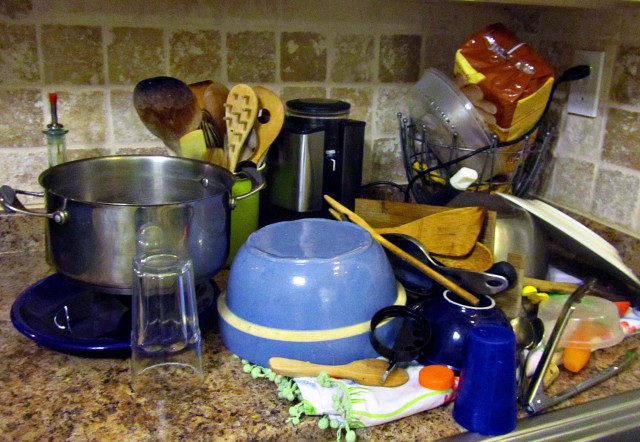 But before I can head off to bed, I have dishes to wash and dry.

Before I leave the kitchen, though, let me jot down some notes and peek at another meatball recipe.

Hope you are enjoying the journey,