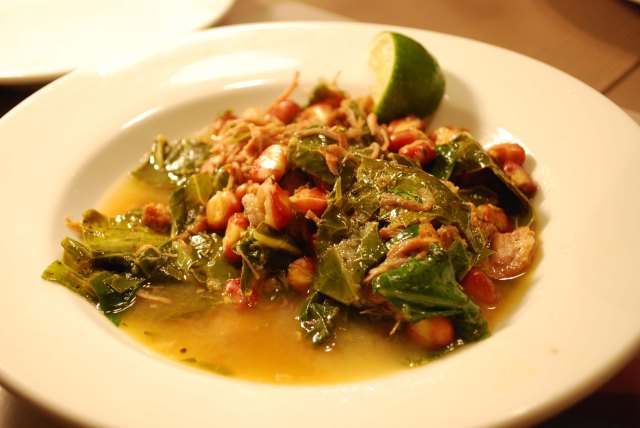 Just in!  Mystery Box #3  from Kelly.  I shopped at a Mexican Grocery Store for her ingredients, and you will enjoy the virtual cook-along.

There is a nor’easter off the eastern coast that collided with a tropical hurricane.  They were propelled forward by some arctic winds, and have resulted in a massive storm.  I have checked the news several times today.  Checking, and looking, and hoping all stay safe.  I have a lot of friends along that coast.  Here in Michigan we are feeling it.  The temperature is just above freezing, the wind is gusting, most of the leaves have fallen, and the cold damp seeps in cracks under the doors and windows and settles in my shoulders and feet.  Snow is projected for tomorrow mixed with rain.  It has the feel of . . .well. . .winter.

And winter means comfort foods, lengthy books, bathrobes and slippers, afternoon tea, and trendy high-heeled leather boots–at least those are the positive things.  Today I want to “hunker down” and feel cozy.  And today Kelly wrote a post that will give you that “good food = a good mood” feeling.  She cooks up some Mexican soup–only it has a much more fun name, and cornbread–only the corn flour is blue, but lest your mouth gets too much of the Adobe Mexi-Mayo (wait until you hear her name for it), there is a cooling ice treat at the end.

So get in your cozy bathrobe and slippers and join the cooking party–you can even have your hair in a “schrunchie” and no one will know.  Let’s join Kelly in a virtual cook along.

I had so much fun with your mystery box.  Here’s what I got: 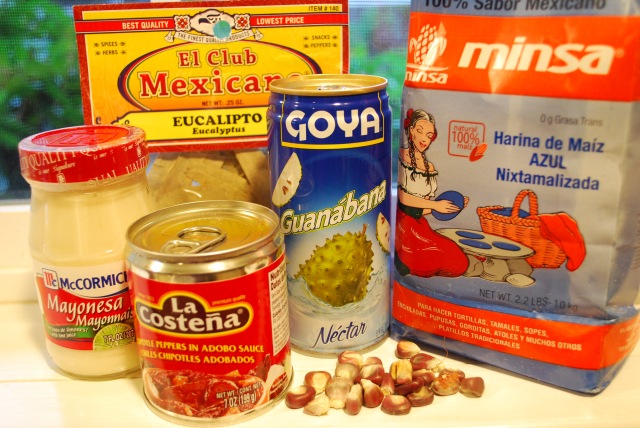 When I saw the hominy, I immediately thought pozole.  Pozole (Po-so-le) is a traditional Mexican soup made with hominy, or dried maize kernels that have been soaked in an alkaline solution to soften the hull.  The hominy you sent looks blue, which I knew would make the soup look great.

A few online searches led me to a recipe by Melissa Clark.  Ms. Clark writes for the New York Times, and she wrote a good cookbook called “In the Kitchen with a Good Appetite.”  I tend to trust her recipes because she has a great sense of what ingredient to add that’ll make the dish deeper, richer, or more intense.  Here’s a link to her recipe, which includes two of your ingredients – hominy and chipotles: http://www.nytimes.com/2012/03/21/dining/spicy-pork-stew-with-hominy-and-collard-greens-recipe.html

She doesn’t call the stew “pozole” because she’s played with it a bit, added a few things and taken some away (the pig head, for instance!). 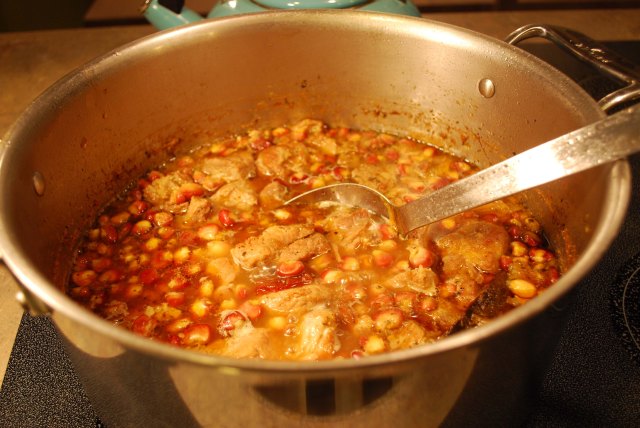 She uses pork shoulder and calls for bay leaf, so I used the eucalyptus instead (three ingredients down!).

She also included collard greens, which I was excited about since I’ve never tried them. 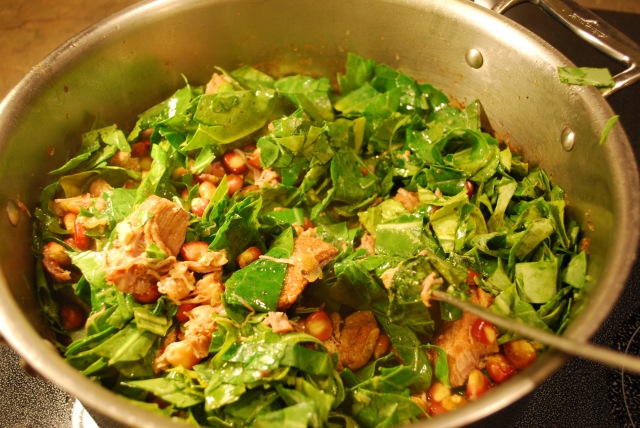 One great ingredient in the recipe is cinnamon.  Have you ever noticed that the end of a cinnamon stick looks like the capital on an Ionic column?

(Here’s a photo of the garnishes Kelly served up with her pork pozole–tasty touch.)

Next I turned to the masa.  The masa you sent is blue, which is just a bit more awesome than yellow or white. 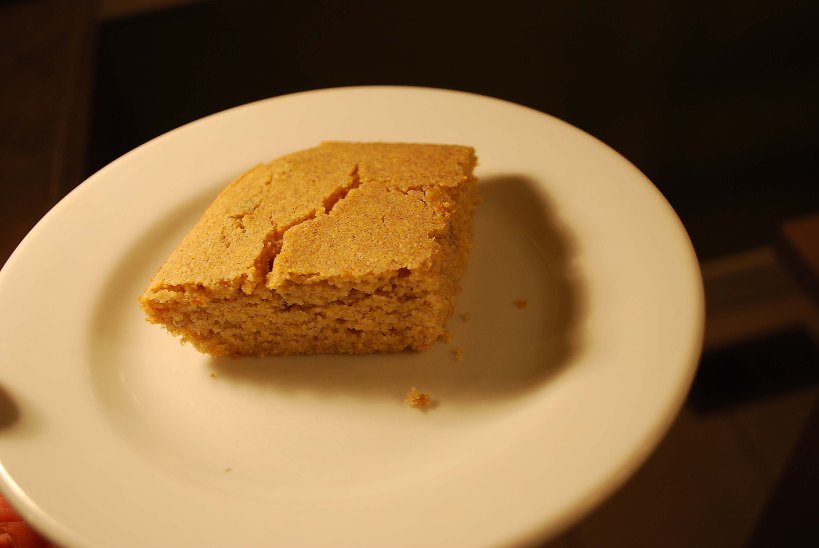 Masa is basically corn tortilla mix, but I don’t have a tortilla maker or press or whatever that is.  So, I searched online for a cornbread recipe that includes masa.  It went great with the pozole.  Here’s the link: http://www.epicurious.com/recipes/food/views/Masa-Cornbread-361733

Now for that pesky mayo.  At first, I thought, “this will be the ingredient I don’t use.”  Then it occurred to me that I could stir some adobo sauce from the chipotles into it and make a pretty good chip dip.  I squeezed some lime juice in, too. The Spouse said, “This stuff has a kick,” which coming from him is a compliment because 1) he’s not a mayo fan and 2) he likes things very spicy.  So I decided to call this dip Dirty Harry Dip because it will blow your head clean off.  I will probably use it as a spread on sandwiches or wraps, too.

I had never heard of Soursop before.  Wikipedia says it’s a tropical fruit with sweet white pulp inside.  The outside is green and spiny and odd-looking.  The nectar tastes good.  I kept searching and found that Mexicans & Latin Americans like to include soursop in agua fresca.  You’ll see agua fresca in those big plexiglass drink dispensers at some Mexican restaurants – the places that don’t look remarkable but serve amazing food.

I poured all the beverages into separate pans, put them in the freezer, and stirred them with a metal spatula every twenty minutes or so. 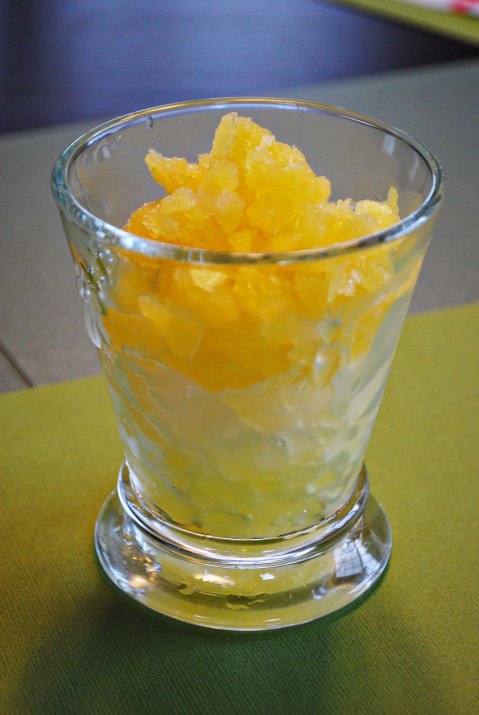 Then I layered them in a glass, and served it with spoons. 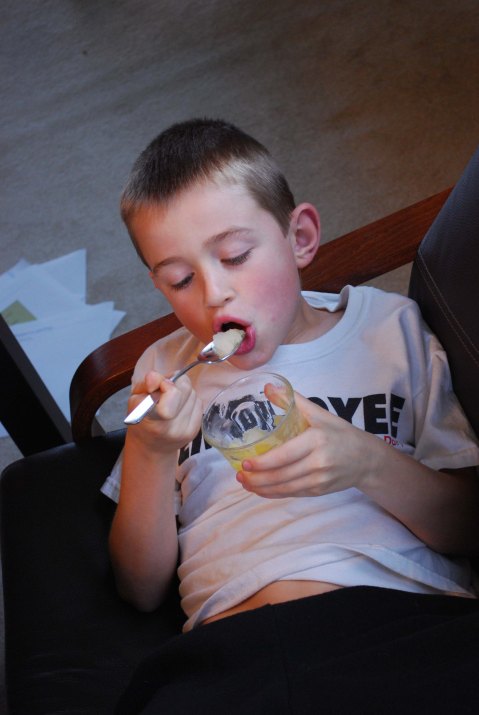 Rebecca, we really enjoyed this meal!  I had to wait for a Saturday afternoon that was relatively clear, commitment-wise, and invest the time, but it was worth it and we all had a new experience, me cooking and the rest eating.

The one main problem with virtual cook-alongs is that we are left hanging at the end of the post with our tongues expecting deliciousness, and we just get. . .nothing.  But maybe this warmed you up a bit on this cold winter day.  Maybe this inspired you to try collard greens and cornbread (Yay! for southern soul fixin’s).  Maybe this post just brightened up your evening with the “you’ve got mail elixir.”

Thanks Kelly for warming our evening (or morning or midnight).