Posted on January 7, 2013 by whitsendmom

Hello everyone and welcome back from Christmas your travels.  I have been having computer trouble, so I haven’t been able to post.  I am sorry that I left you hanging with the Alaskan Adventure.  If you have forgotten the story line, here are the links to get you started.

Yesterday I quit writing because shortly after that last paragraph, I took over the wheel of this camper and drove us all the way into the park. It is kind of a large vehicle to drive, but it was ok. Andrew laid down in the back and slept for about 60 miles. I pressed on and only got nervous a few times. The most scary piece of road was when all of the sudden I found myself barreling across a bridge that just appeared and the name of the place was hurricane gulch.

I don’t fancy myself to be terrified of heights, however…..there was nothing between my camper and this “gulch” except a guard rail, which seemed quite inadequate considering my vehicle is probably 8 times the height of the guard rail. This bridge isn’t very long at all, but it scared me because all of a sudden I was on it and one glance down and my legs were tingling. Drivers training came flooding back to me and I remembered that you tend to steer in the direction you are looking. The last thing I wanted to do was drive in the direction of the gulch, so I glued my eyes to the pavement in front of me and drove the remaining 5 seconds to the end of the bridge.

Before you judge me as a wimp, I will say that upon further reading I found out that hurricane gulch bridge is 250’ above the river. I guess there is a train bridge that is even higher than that a little further down the river. It has obviously been carved out by a glacier and was very, very narrow. Even when we drove back over it on the way south and Andrew was driving it was intimidating.

We finally made it to the park and man was it a long drive. We stopped at the visitors center and read a few things about the animals and such, used the bathrooms, and paid $10 each so we could go through the first 15 miles of the park driving our own vehicle.

Strange, they give you nothing but a receipt and basically tell you that you don’t need it, so I had to wonder how many people just go driving those first 15 miles never stopping by the visitors center to pay. We wandered back to the RV parking and climbed in the camper to make a few sandwiches for lunch and then started the drive through the park.

The first few miles I literally glued my eyes to the window, ignoring the text messages that were coming through since I had a bit of service, and tried to look through the foliage for any sort of large wildlife that may be hiding in there. I kept telling Andrew to SLOW DOWN….I can’t scan that fast!!! We ended up with a tour bus behind us, and thought it may be to our advantage to have them in front of us. Seeing that they are trained to see any wildlife, we figured if they were in front and all of a sudden stopped, they were probably finding something worthy of a picture.

We found a spot where we could pull over just enough for them to get by, and probably around mile 10 or so, we were rewarded. The foliage had changed and wasn’t near so dense, and lo and behold there were three moose at the left edge of the road and the tour bus was stopped.

I grabbed my camera and panicked……change the batteries. You have GOT to be kidding. All this way, like thousands of miles and HOURS of driving to get to the park and we see three moose and my camera says CHANGE THE BATTERIES?? Oh good grief! I quickly turned the camera off, then on again, as sometimes works, and it did. I was able to get a few good shots of the moose as they were taking their time crossing the road.

Besides….I couldn’t find the batteries that I had brought, and even if I had found them, I had a bit of a sinking feeling about them anyway. When I was crossing “camera and batteries” off of my list on Monday morning, I discovered we had no new AA batteries in our house. If I were smart, like my husband, I would have grabbed one of the kids toys that ran off of AA batteries and robbed it of its power. However, I opened the drawer in the kitchen where I keep pens, papers, change, markers, and a whole host of other things, not the least of which is something I call mystery batteries.

These are batteries that for whatever reason I find lying around the house. If you met Mary, you might understand. I throw them in the drawer never having any idea if they are full of juice or not. I had grabbed 8 of them, hoping that I would be able to find some combination of four that would be effective in running the camera. Yes, I know that buying a battery tester would probably benefit me. Some day I will remember that when I am near the battery testers at the store.

(Obviously these are fairly young moose. They didn’t all have antlers.)

We continued on slowly through the park and upon looking down quite a ways from the road to where there was a river running through, we saw two Caribou. Now I’m pretty sure full-grown caribou are smaller than moose in body size, but they have some HUGE racks on their heads! Thankfully the camera was still functioning and I got a few decent zoomed-in pictures of the caribou. 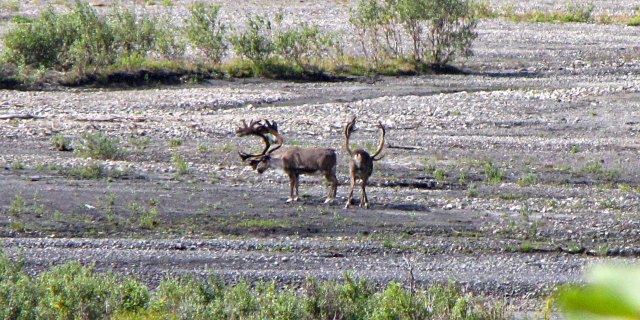 They were a ways down there. We were then at the end of the 15 miles we were permitted to go, and turned around near a parking area with bathrooms by the Savage River. Less than a mile after our turn around, a middle-aged couple were riding their bikes and the man scared me half to death as he was riding in a “shoulder” not much more than 1 foot wide and after that “shoulder” it dropped off down towards where we had seen the caribou at a very, very steep incline.  We drove past him slowly and had to stop because they were doing a bit of construction on that area of the park road.

Andrew rolled his window down and we chatted with the sign lady for a bit. She said that at 7pm the night before when she was leaving the park she saw moose, caribou, and a bear. I still hadn’t seen my bear. Andrew asked where she lived and she said Healy, 11 miles north of the park. According to our handy-dandy book, Healy has 1,027 year-round residents. The sign lady told us there had been 4 grizzlies hanging around Healy recently and the DNR had finally given the residents the go ahead to shoot them. They had apparently been eating livestock. It was a sow with her 3 one year old cubs. The sign lady said that at least 3 of them had been shot.

She also told us that last winter it got to 64 BELOW. She said you basically just bundle up and grab the remote because there is nothing else to do and things start breaking when you try to start engines at that temperature. She also mentioned that they had two months straight where it never got above 40 BELOW. Brrrr. I looked up Healy in our book and discovered it has the only producing coal mine in the state of Alaska. They supply power to three military power plants and three non-military plants. Up until 2002 they were shipping coal to South Korea.

Our drive out of the park was fairly uneventful. We did see another caribou, which was closer than the first two, but still a little way away. However, the thing was intent on eating a bush that was between us and the caribou, so I had a hard time getting a good picture of the actual head. You can see the rack though!

We drove out of the park and headed back south. Eventually crossing the hurricane gulch again, and my legs still tingled even though I wasn’t driving, nor was I surprised by this geographical marvel.

Andrew had hopes of going to Hatcher Pass, where Independence Mine once operated. The Hatcher Pass road really isn’t out of the way if you are heading towards Anchorage, however it is treacherous in places, so it takes much longer than staying on the “highway”. Near where the Hatcher Pass turnoff is, we stopped for a little gas. Andrew mentioned that maybe I should go in and buy some reliable batteries, since the ones I brought, which I did find by the way, afforded me little battery time. I went in and bought my $6 batteries and a small container of ice cream. We could at least have ice cream. Out in the wilderness yes, but we DO have a freezer. 🙂

We turned on the Hatcher Pass road and were tired and hungry. We knew from our book that it was about 30 miles to the Independence Mine, so we didn’t really set our hopes on that. We decided to drive until we found a good gravel turnout to park for the night. We got as far as the Willow Creek Bridge and stopped.

If I thought Peters Creek was fast flowing, I knew nothing. Willow Creek, despite the fact that the name sounds ever so gentle, (don’t you think?), was quite loud. Even with all our windows closed at night, it was rushing so loudly it sounded like a really high wind. Although it was much more calming than that. I’m not really a big fan of high wind, it scares me for some reason. Rushing water is not bothersome and we had no trouble sleeping with the sound of it right outside our camper.

We were about 12 miles in on the Hatcher Pass road. We probably average no more than 20-25 mph, so it was slow going. Same for the Petersville Road the day before.

I got to work making supper. Browned one of our pounds of hamburger, and mixed up one of the boxes of hamburger helper, and soon we were eating a gourmet dinner of stroganoff, carrots, grapes and water.

Shortly after supper Andrew fell asleep. I did the dishes and sat quietly eating ice cream by myself, and pondered life. It is nice, if you need to ponder life, to be able to do it without distractions. No phone calls, no work to do, no noise whatsoever except that of a rushing river. I don’t think I accomplished anything by my pondering, but I gave it my best shot.

Well, we now have batteries, but still no bear.  The Alaska Adventure continues with The Tall Guy’s quest for gold and a comfortable way to sleep his lanky frame in a camper.  Stay tuned. . .