Our day started with The Hunni waking up early and saying, “Let’s sneak out before the kids wake up for an early cup of coffee.”

That was the plan, but Little Man (the baby) heard us,
and so The Daddi swung him up onto his shoulders. 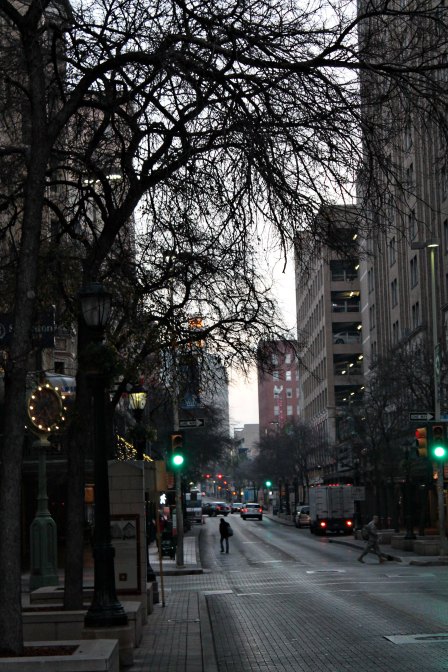 We woke up with the city.  The morning air was cool, and commuters were just beginning their commute.  Starbucks was busy, but not yet packed with frantic people late for work.

We walked back to the hotel with our coffee, so we could be nearer the kiddos who had groggily grunted when we told them we would be out. 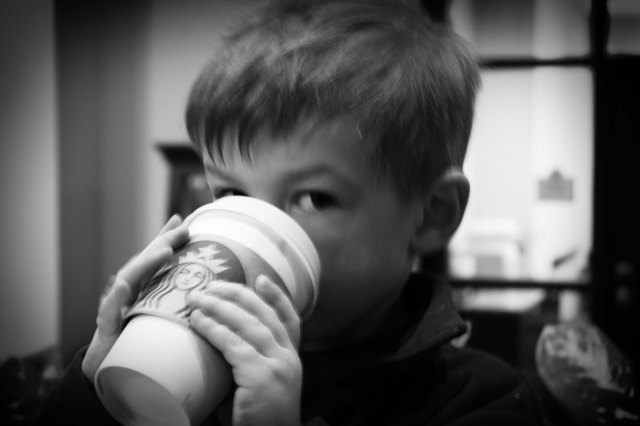 Little Man loved all the individual attention.  I always hear about “Daddy-Daughter Dates” and all, and I always think, “we should do that,” and then another four months goes by.

Little Man (the baby) took his coffee over to the fountain to drink it.  The Hunni and I got busy talking, then noticed that great, big, tears were rolling down Little Man’s cheeks.  “What’s wrong?” we asked.  He was crying because we were “way over there [like 12 feet away].  But what I realized is that Little Man had gotten up too early, had too much coffee on an empty stomach, and that we had a long day ahead of us.

Since we had arrived a day before our scheduled visit, The Hunni decided to check and see if he had made all of our travel plans a day late.  He had.  We talked.  We decided not to change all of our hotels, but to spend the night in Austin.  But today, we still had San Antonio to explore.

It was still early when we started out.  The fact that it was January, and we were all walking outside without freezing in our parkas and wool sock and boots, was wonderful.

Today we visit the Alamo.  Remember the Alamo?  That little church in Texas that triggered the beginning of the fight for Texan independence?

We had been told by more than one person, that The Alamo was, well, . . .boring. 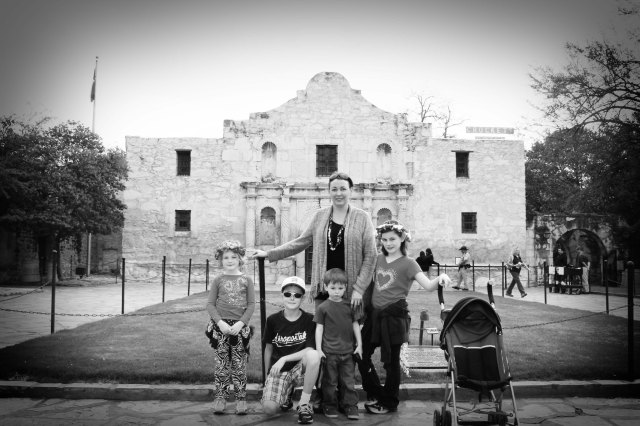 I couldn’t disagree more.  We loved the Alamo.

First off, it is free admission.  How could anyone not love that! 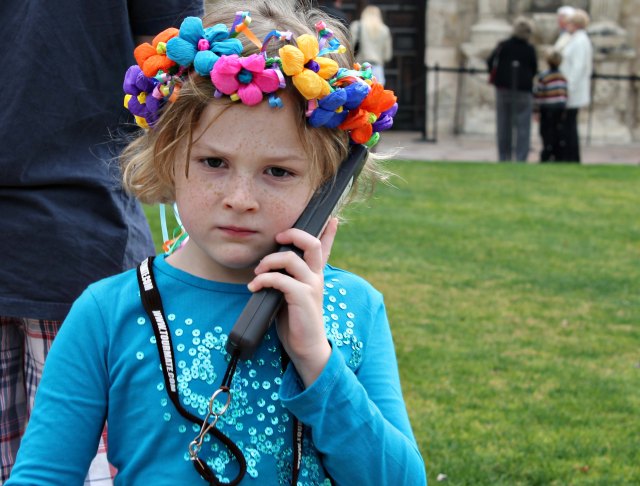 Now if you wanted to hear a talking tour, then you had to pay for the audio. 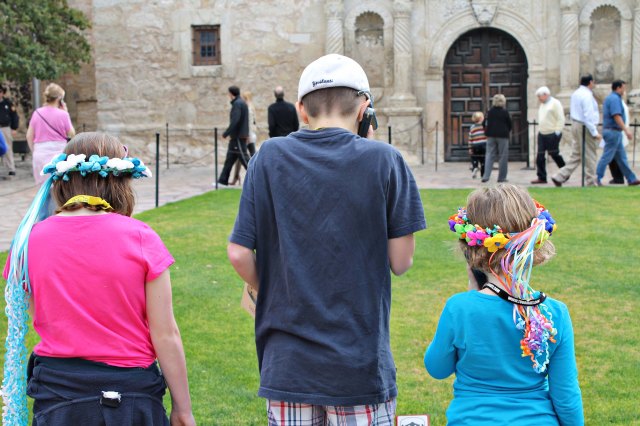 Second, the Alamo receives no Federal Funding!!  Amazing!  The Alamo is organized and run and maintained and financed and everything by The Daughters of the Republic of Texas.  Great job ladies!! 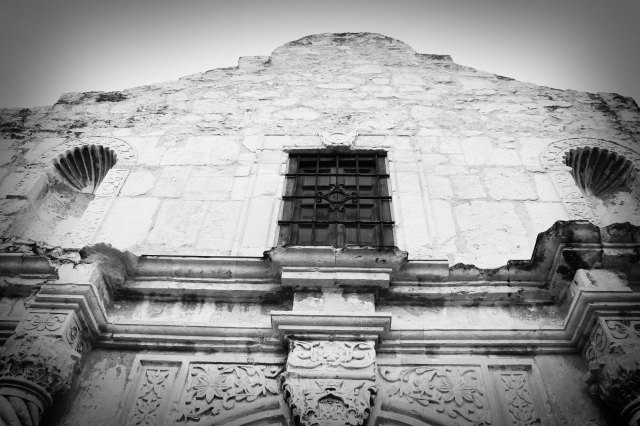 Here you can see where a cannon ball hit the Alamo.

My third reason for loving The Alamo is the gardens surrounding the church.  Just look at this ancient tree! 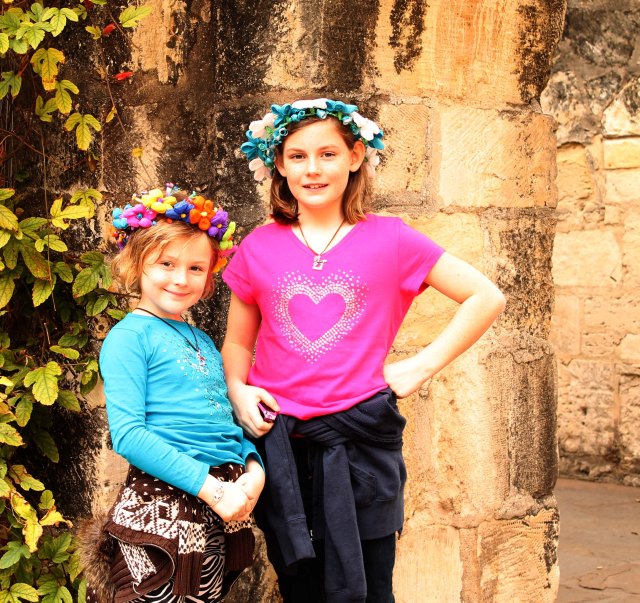 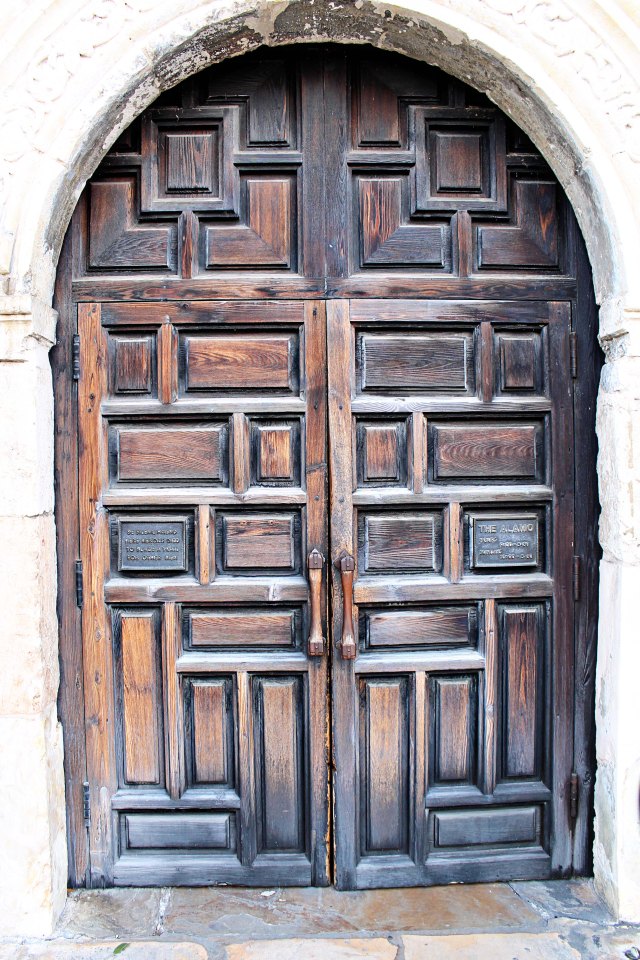 And my fourth reason for loving the Alamo is the gift shop.  The gift shop helps fund The Alamo.  It also was where Scout purchased the “Best Friend” necklace for herself and her sister with her own money.

I may or may not have mentioned that I am rather proud of my Buchanan heritage.  Here are some of the names of those who died at The Alamo. 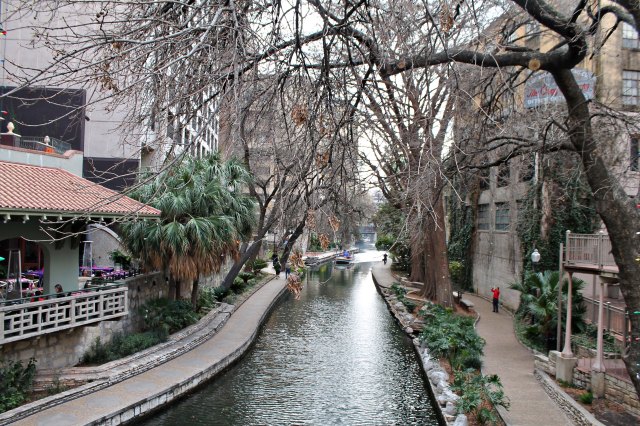 But it was time to say good-bye to The Alamo, the Riverwalk, Market Square, and all the other places we enjoyed.  We had work to do.

We spent the rest of the day visiting children’s boutiques in and around San Antonio informing them about our Ypsi Doll line of clothing.  While I took some samples into different boutiques, the kids stayed in the car with The Daddi listening to Swiss Family Robinson.  This set up worked for a couple of stops, but sometimes while in the boutique I would hear a horn go off, and then I knew that Little Man (the baby) was sitting on The Daddi’s lap pretending to drive.  “Goodness”, said the store proprietor, I wonder what that is all about.  Another time, we parked right in front of the upscale children’s boutique.  As I was giving my sales pitch, I followed the proprietor’s gaze out the front window.  There were my kids in their unbrushed hair hanging out all of the windows.  We looked a little like the Beverly Hillbillies.

We had one last boutique to visit, but we were 6 minutes late!  Disappointing.  However, we had dinner plans.  We were going to met up with some friends of friends.  The Hunni knew them, but I had never met them.  The suggest a BBQ restaurant, and we were thrilled.  We had yet to eat BBQ in Texas. 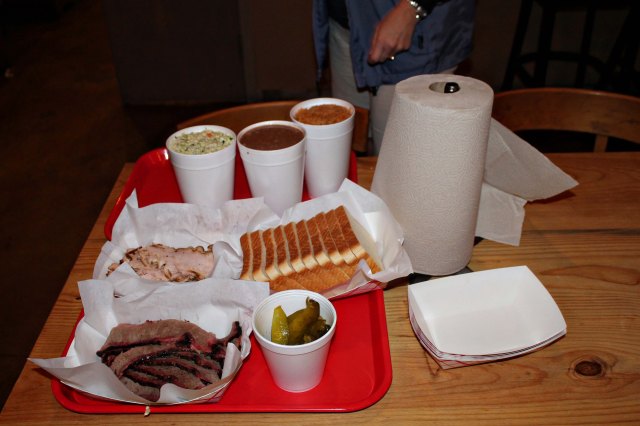 Here you can see the smoked brisket and turkey we loved.  The cole slaw wasn’t heavy, and a bit tangy–just how I like it.

But what really made the evening was the new friends we made.  I came not knowing anyone, and went home with a new friend.  Steve and Ann also had started a new business, so we could definitely relate.  Being ahead of us in their business venture, they were able to give us some advice.  Thanks Steve and Ann for the delicious food, and fun time.

Baseball boy enjoyed a game that was on.  Steve and Ann’s boys were very kind about including him in their conversations (more like listening to him.)  Thanks guys.

After BBQed brisket, rice and beans, and cole slaw, we went out for ice cream.  It was a sweet ending to a great visit.

We still had “miles to go before we could sleep,” as we were headed to Austin for the night.  We arrived late and tumbled into beds.  Tired, but happy.

Thanks for coming along with us. 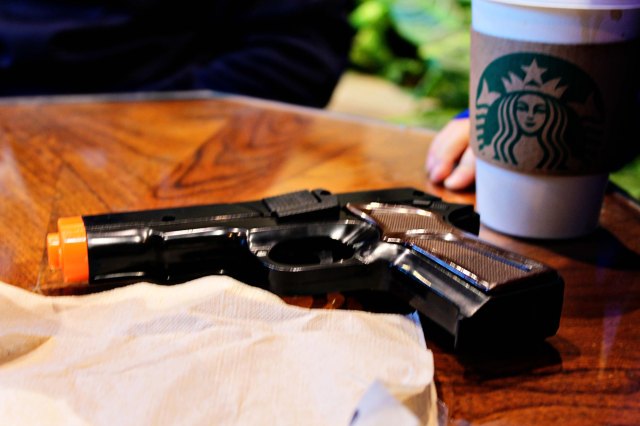 This entry was posted in She said... and tagged the alamo. Bookmark the permalink.