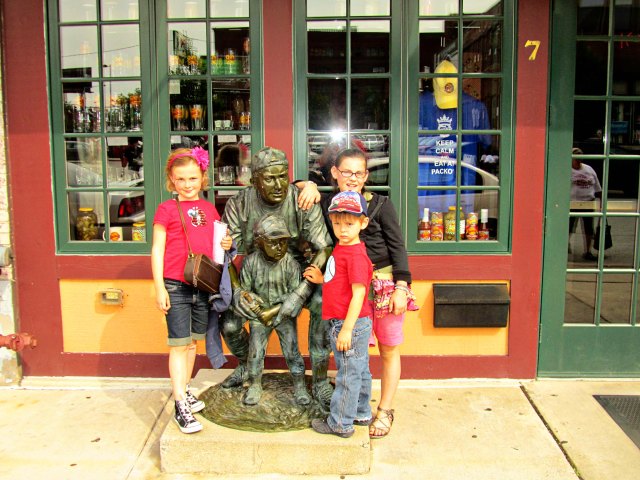 I promise, I will eventually get to the cooking part of the segment, but first Baseball!

Nothing is more American than baseball.  We even have the saying, “As American as apple pie and baseball.”   I love baseball.  It is considered the “all-American sport”, and Rogers Hornsby gives the reason why, “I don’t want to play golf.  When I hit a ball, I want someone else to go chase it.” 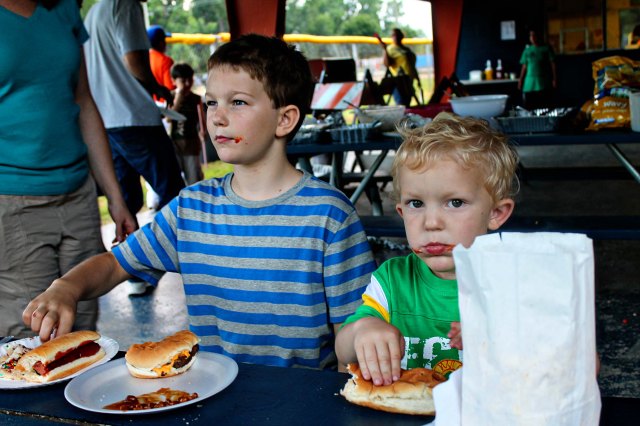 (photo of our cousins Evan and Logan)

And baseball has its foods.  Hotdogs of course. 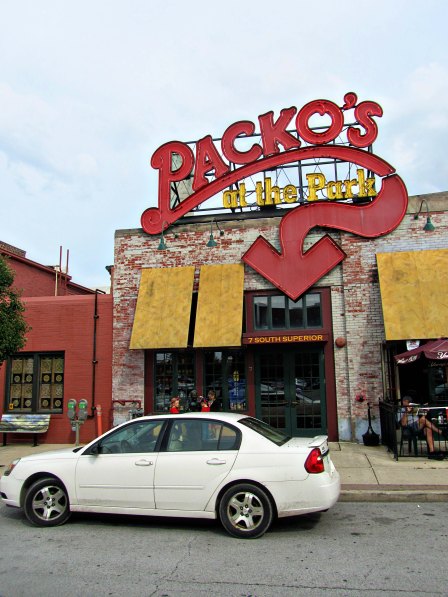 Now if you want a great hotdog, you need to go to Tony Packos in Toledo, Ohio. 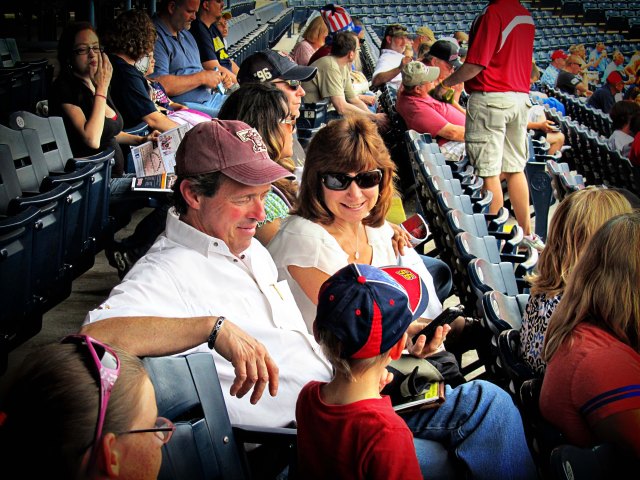 We had been invited out for “dogs” and a game by our friends Paul and Ruth.  And as Humphrey Bogart said, “A hot dog at the ballgame beats roast beef at the Ritz.” 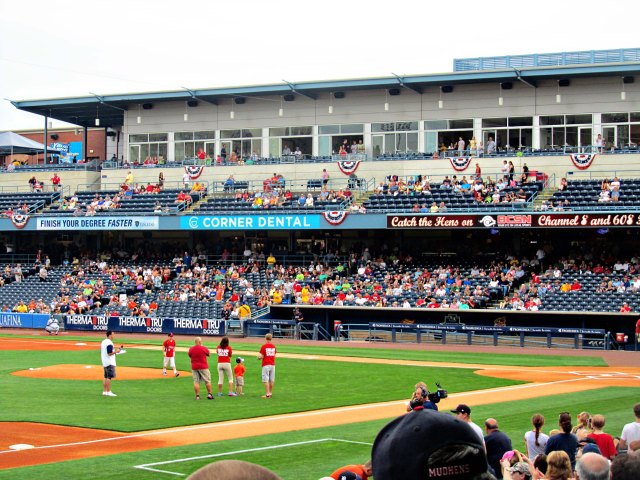 This is the Mud Hen’s field–they are Toledo’s minor league team.  Minor games are WAY more fun than major games, and Bill Veeck tells us why, “I have discovered in twenty years of moving around a ball park, that the knowledge of the game is usually in inverse proportion to the price of the seats. 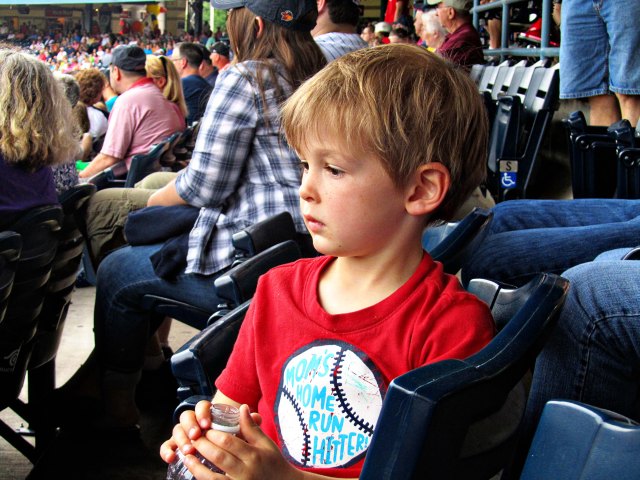 Now baseball has its own language.

“Sixty years ago, in the second supplement to The American Language, H. L. Mencken collected more than 100 terms just for the word “hit”–including “bleeder,” “bloop,” “dribbler,” “nibbler,” “nubber, “scratch,” and “squib.” They may sound like names rejected by Walt Disney for the Seven Dwarfs, but in fact all mean essentially the same thing: a weak hit that makes it through the infield on sheer good luck.”  (From here) 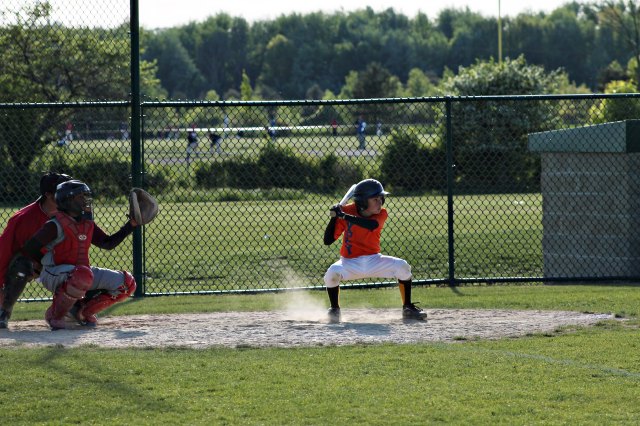 (Here is a photo of a boy whose coach told to make sure the next pitch was a ball.  He is trying to make the smallest strike zone possible.  Strike zone = area between shoulders and knee caps.)

I mean, why would a bad pitch be called a “ball”?  How is a ball that is “in” suddenly be called “out” when it is caught infield?  And why is baseball the only sport where the term “foul” refers to a ball going out-of-bounds while in all other sports it refers to player’s conduct? 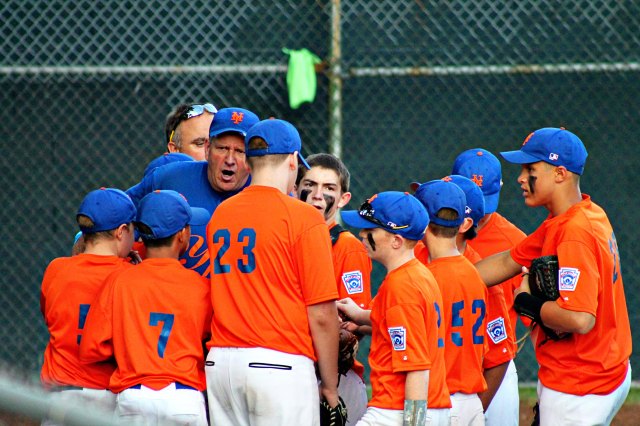 And just when you’ve mastered the 100 different terms used to describe a hit, there is the whole sign language thing to learn.  Coaches and catchers have mastered secret hand signals over the years.

Hand signals have been attributed to several different players, two of which were deaf.  “Dummy Hoy” , and “Ed Dundon“, and have been perfected and mastered over the years.  Now you won’t find a YouTube link to help you decipher the coach’s hand signals, because they are secret, specific to each team, and ever changing!  The point is to talk to your players without the opposing team knowing what is being said. 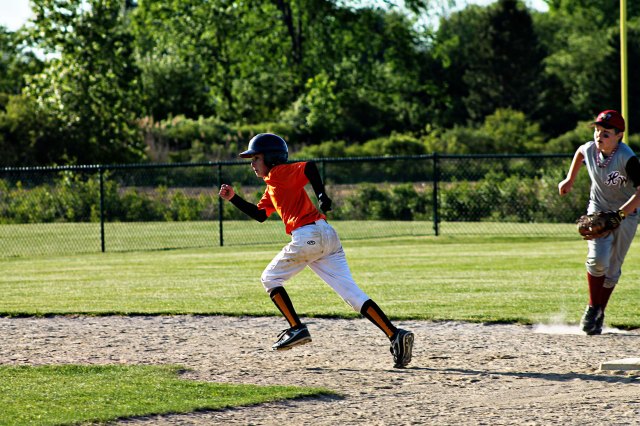 Sometimes there is an “indicator signal”.  An indicator signal is to let the player know when the real message is being given.  For example, if the Indicator is when the coach touches his ball cap, all signals given before then are garbage–meant to confuse the opposing team.

And in this world of baseball there are songs.

The most famous one being “Take Me Out to the Ball Game” which is sung by the audience during “the seventh inning stretch.”

And from that song when have the classic baseball snacks of  “peanuts and Cracker Jacks.”

Now I love baseball, but when my son plays I’m a nervous wreck.  A baseball game is simply a nervous breakdown divided into nine innings.  ~Earl Wilson

My blood pressure is sky high when my son bats, and my stomach is all nervous.  This problem is helped by snacking.  Baseball players chew gum or sunflowers seeds (And only rarely “tobacco” since the 1990’s–thanks to a ban in 1993 in the Minors, though not the Majors). 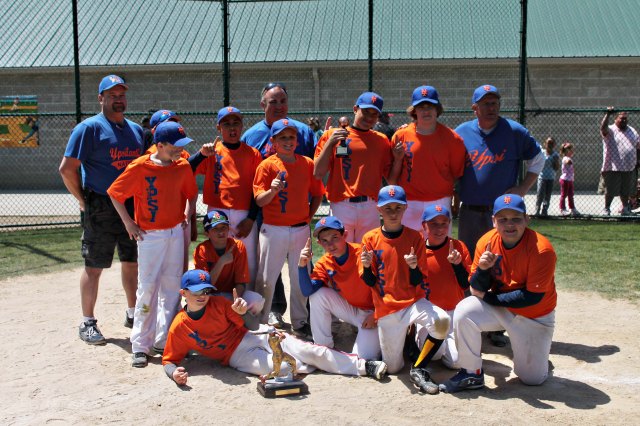 So let’s make this All-American Baseball Snack.  Cracker Jacks is a brand name for Carmel Corn. 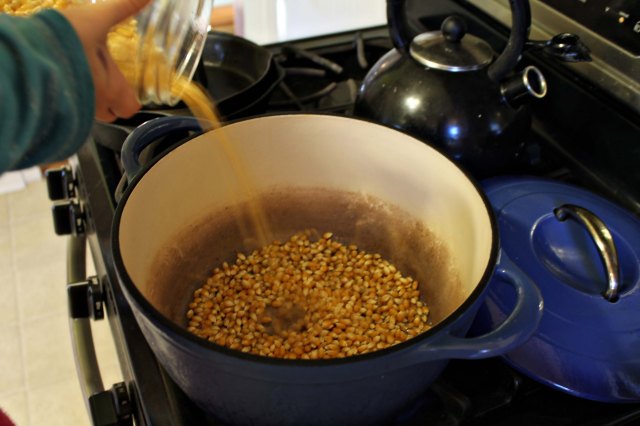 Start by popping up some popcorn.  I still pop my popcorn on the stove since I can control the amount of salt and butter added, but any type of popped corn will work. 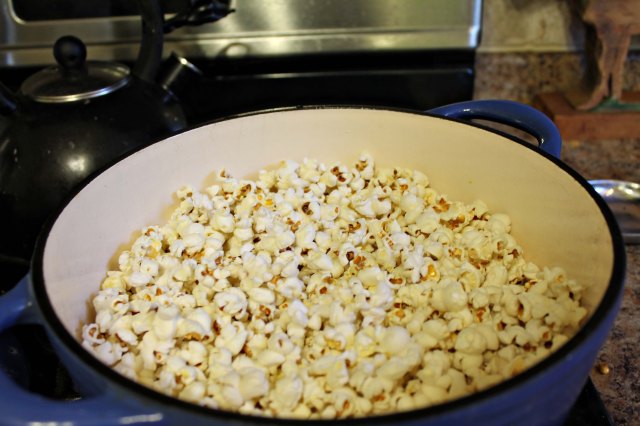 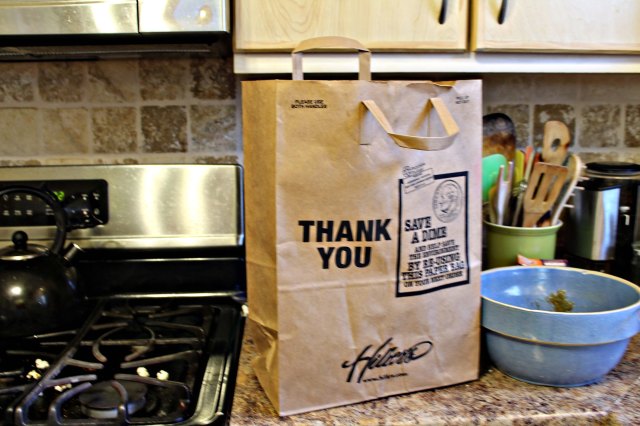 Pour all the popped corn into a brown paper bag.

Now we can start on the caramel.  A “caramel” is really a melted (and slightly burnt) sugar.  Instead of melting sugar down to a liquid, we can also just use liquid sweeteners like corn syrup or molasses. 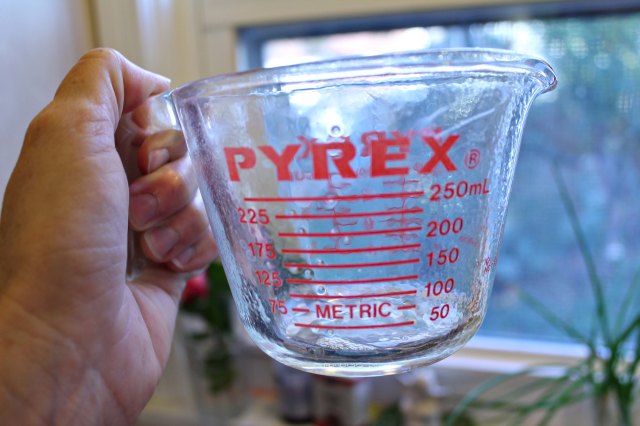 Measuring sticky sugars is a cinch if you spray your liquid measuring cup with spray oil first. 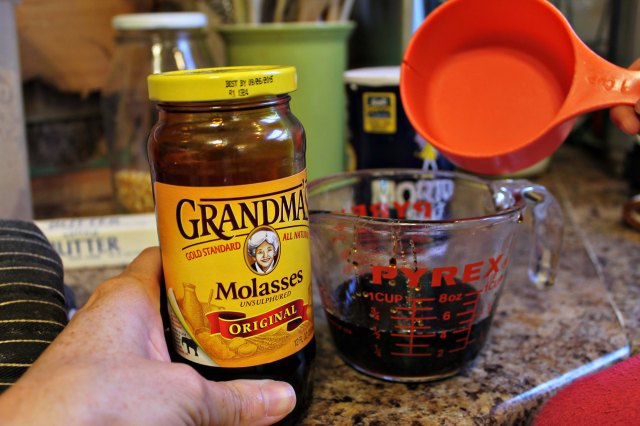 I had molasses on hand, so I used it.  But the original recipe calls for “Dark Karo” which is a mid-west term for dark corn syrup. 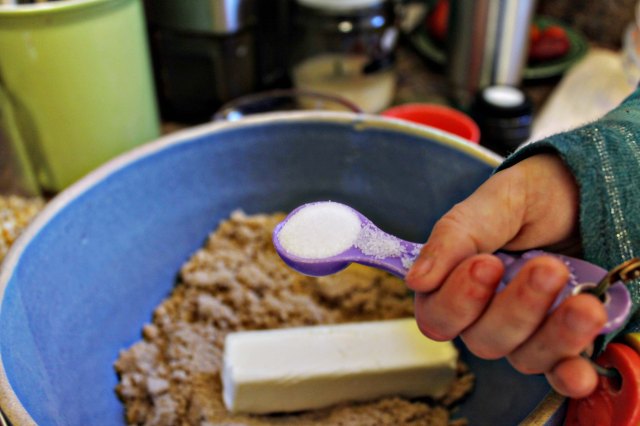 “Karo” isn’t the only mid-west word in my handwritten copy.  I have been making this recipe since I was a teen.  My cousin Joanna gave it to me and her handwritten copy uses the word “oleo”–such a great 80’s word!  Oleo is margarine for you folks born after the 80’s.  Now I use butter. 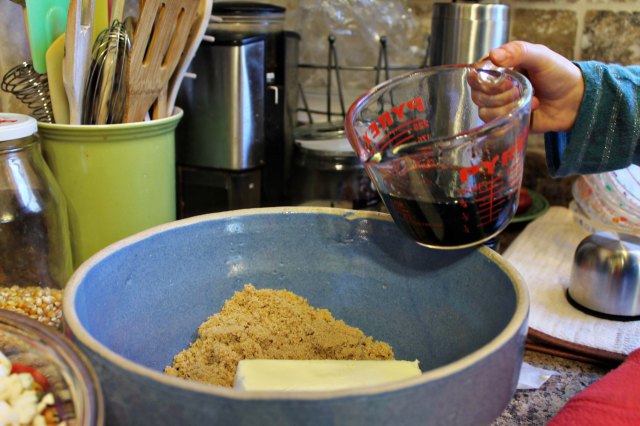 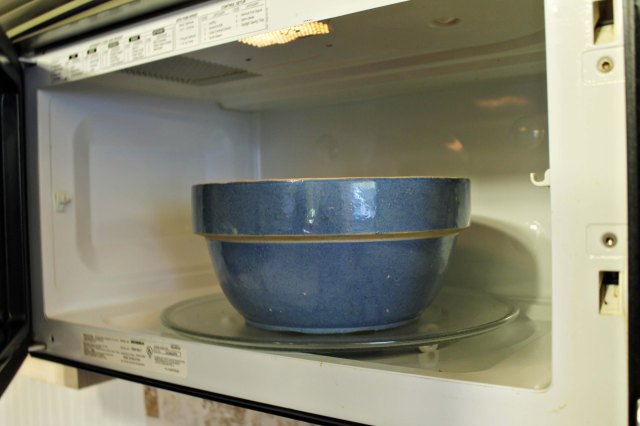 Now we are ready for the secret ingredient. . . 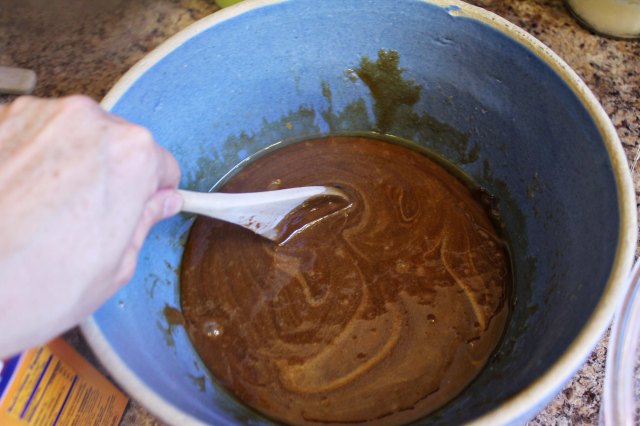 This is what the caramel sauce will look like before adding the baking soda. 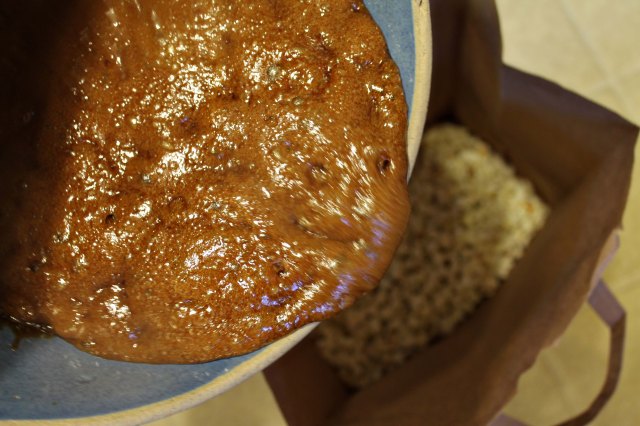 Pour the hot caramel sauce over the popped corn in the brown paper bag. 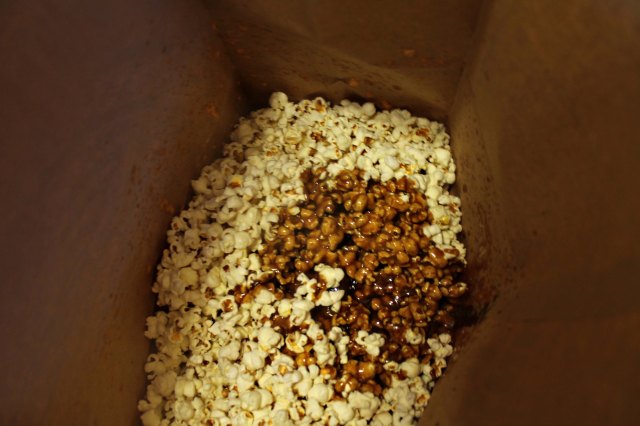 You do not need to shake the bag or mix the popcorn.  Just leave it alone. 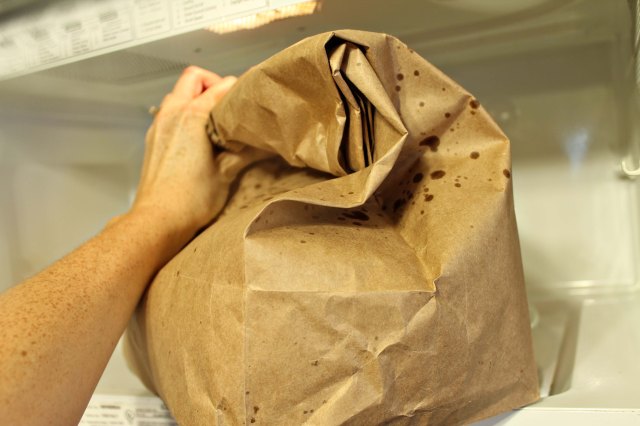 Roll the bag down (Careful caramel sauce is VERY hot!) and place in the microwave again.  Microwave on high for 1 and 1/2 minutes.  Then remove the bag and carefully shake all the popcorn around.  This coats the popcorn in the caramel sauce.  You can feel the caramel corn being coated as it gets heavier than the uncoated popcorn. 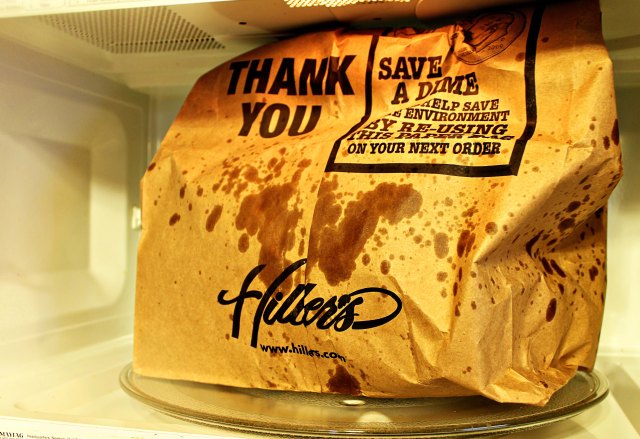 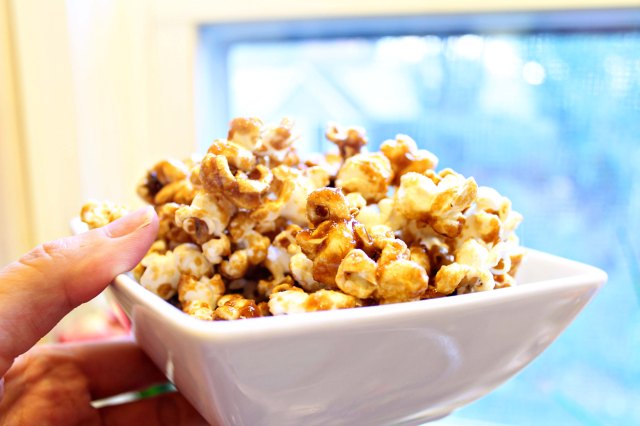 Your Microwave Caramel Corn is ready.  Dump the Caramel Corn into a dish (or onto a cookie sheet) to cool.  Serve and devour.  The great thing about this recipe is throwing away the brown paper bag with all the mess.  You really have only a pot (popcorn), and bowl (caramel corn), and a spoon to clean. 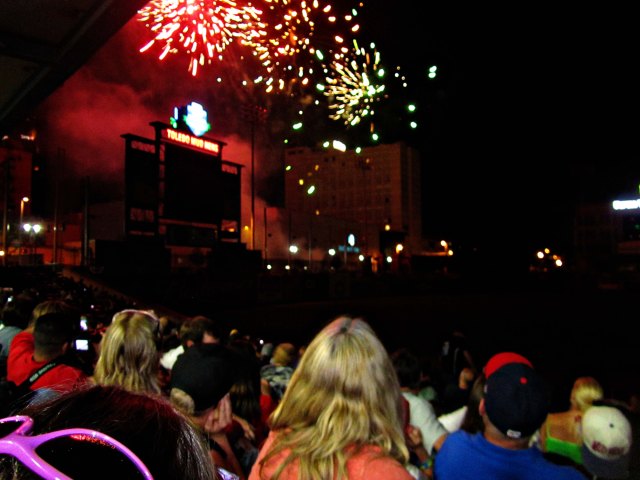 And not having many dishes to clean is a reason to celebrate my friends.  Thanks so much Paul and Ruth for the fun filled evening.  My kiddos are still talking about it and wear their sweat shirts daily!

Jum, Jum (which is Eloise for “please miss me a little while we are apart, but other than that have a nice day.)

P.S.  If you think baseball hasn’t affected you, read some of the baseball jargon you probably use in your everyday speech.

And “right off the bat,” a few of those terms (just a “ballpark figure”) spring to mind.

At one time or another, we’ve all been “shut out,” “caught flat-footed,” and then “left on the bench.” Invariably, just when we thought we were “batting a thousand,” we “choked” in the “clutch” and “struck out.”

Oh, once we might have tried to “play the field,” maybe even “got to first base.” But failing to keep an “eye on the ball,” we found ourselves “out in left field” or even “out of our league” altogether.”

“In a pinch,” we’ve probably “gone to bat” for a friend who had “taken his licks” and already had “two strikes against him.” At work, we’ve tried to be “a team player,” follow “the ground rules,” “touch all the bases”–even when we’ve had to “play hardball.” On occasion we’ve “taken a rain check”; sometimes we’ve “hit the dirt.”

And if that list doesn’t convince you that baseball IS America, check out this list of baseball derived phrases we all use. 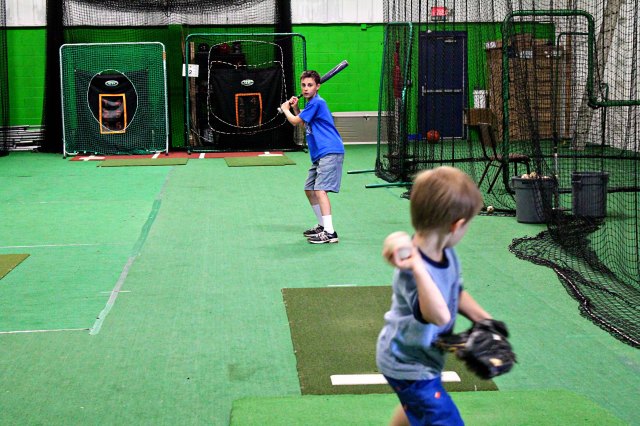