Kayaking.  That was all Baseball Boy could talk about.  I had stopped by a kayak rental place to inquire about prices, and now he just had to go kayaking.  I problem was that I couldn’t go with him–I had a Little Man that was only three.

After sleeping on it, I decided that I could rent a double kayak for Baseball Boy and Scout.  They would be fine with life vests.  Kayak rental was just over $25 for two hours, so the two older kiddos headed out after breakfast.

The kayak rental place was right beside the huge red structure that just dominates the port of Marquette.  The huge red pier created a smooth kayaking area, and with the breakwater way out, the kids had about 30 acres of water on which to kayak.

Here you can see the kiddos in the little red kayak with a Tall Ship heading out for a cruise.

There was an island before the breakwater, so they tried to get out and explore the island.  Baseball Boy got out, but Scout was worried the kayak would float off, so she stayed with the kayak (smart girl.)

The port was busy with Tall Ships and pleasure crafts coming in and out,. . .

It was just beautiful.  Can you count the layers of blue here?  And Lake Superior sparkling like it was sprinkled with diamonds! 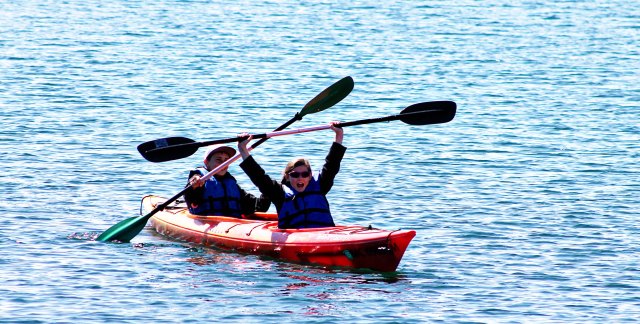 I knew Scout and Baseball Boy were having a blast.  Baseball Boy longs for independence, and this is one time I could “let out the line”.  But it wasn’t without some fear.  I planned rescue strategies from the bank.

The photos don’t convey just how far out they were, but due to the breakwaters and two large piers, they couldn’t be swept out into the hugeness of Lake Superior.

And so I watched my two oldest kiddos out on the lake.

Then I looked down at the two kiddos left on the dock with me. 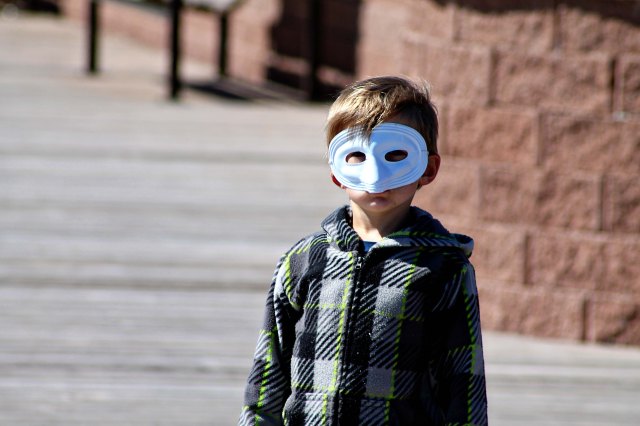 Meet The Lone Ranger.  He wears this mask a good part of everyday.  He is not acting like the Lone Ranger, he is the Lone Ranger.  (The mask is just a cheap mask I found for a couple of cents.  It has a beak nose and doesn’t really look like a Lone Ranger mask, but I would never tell him that!)

He wanted to go swimming or kayaking or both.  I decided that I could say “yes” to the swimming.  I could watch two kiddos in the pool and two kiddos on the lake through the glass windows.  So we started walking along the dock back to our hotel.

About this time, Baseball Boy and Scout headed in.  I had asked that they give Eloise a ride before they returned the kayak.  Look at Eloise.  Her expression is part excitement and part terror. 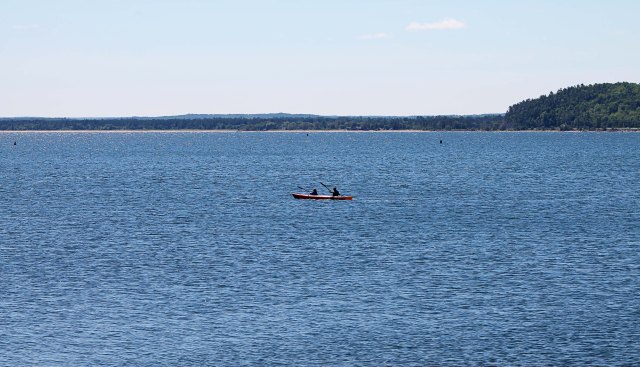 And so off went Baseball Boy and Eloise.  I could hear an occasional scream followed by a giggle from Eloise.

And so with Eloise and Baseball Boy in the kayak and The Lone Ranger and Scout in the pool, I had to revise my mental rescue plans.  It is my job to add worry to every element of child rearing, I think.

But face it, you can’t worry for long with The Lone Ranger by your side!

The kayak rental made the morning for the oldest three.  They had had an adventure, and now were hungry.  Lunch loomed.  What to do?  A friend of mine had given me a Restaurant.com Card. Only certain restaurants accept the card, so I had printed off two coupons for two local restaurants–the only two within a 20 mile radius that accepted the card.  Yesterday we had tried an Italian place, but found it only opened in the evenings, so we had walked across the street to Jimmy Johns.  Today, I planned on trying The Country Grill.

This photo of Country Grill Restaurant is courtesy of TripAdvisor)

I had my doubts.  Probably a “green beans from a can” type of restaurant I thought.  We walked in, and it looked like someone’s country home.  Clean.  I explained to the hostess that we only had 45 minutes to order and eat, and I had a $15 off coupon.  Could she handle all that?

What followed was the best meal of our entire trip!!!  It was diner delicious, homemade, real food, served with a smile and a low price tag. !!!!

I ordered a burger with onion rings right on the sandwich–those are sweet potato fries and coleslaw on the side.  The patty was all beef and thin–more like a Steak and Shake burger.

Eloise likes salads, and ordered a chicken salad with raspberry dressing.  She shared a bite, and it was good.

Eloise had a bacon burger loaded down with thick bacon.  She was hungry after two hours of kayaking.

Baseball Boy had the local Whitefish platter.  And Little Man just had a little off everyone’s plate as there was plenty to go around.   The waitress and cook rushed our order, and we left within our 45 minute time frame–full and happy.

Now the city of Ishpeming hosted the State Baseball tournament this year.  It is a small town, yet it hosts a ski competition each winter that attracts a crowd–a ski jump contest. It is called Suicide Hill.

(image and info from here.)

This photo isn’t Photoshopped to look old, this photo is circa 1959–waaaaaay before extreme sports were in vogue.  In February of 2013, Ishpeming hosted the 126th annual Ski Jumping Contest.

And that is why this little town in it’s remote location has the U.S. National Ski Hall of Fame.

We didn’t have time to visit, but maybe you will when you go.

Baseball Boy once again had a practice before his game.  I decided just to drop him off and head off in search of a local dish I kept hearing about–a pasty.  I had asked around and heard the name “Laurie’s” mentioned by several people.  I was given the directions of, “Just go to the end of the road and it is right around the corner.”  Well, half a mile later, I never saw the place and and just turned around.  Today, I wanted some more concrete directions.  I learned the name of the “restaurant” was Lawry’s and “just around the corner” meant 6 miles down the road.  We headed out. 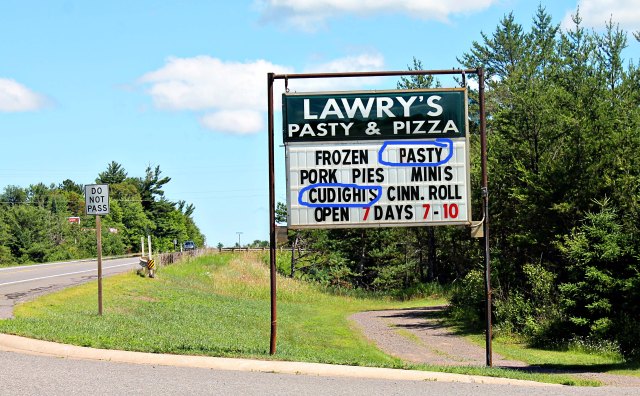 We found Lawry’s “just when you think you are getting to about nowhere, and start wondering where in the world I sent-ch you,” just like the lady at the gas station had said.

Now let me ask you a question.  When is the last time you entered a restaurant through a screen door–you know, like the screen door that leads to your porch?  Years and years, is my answer.  I remember an old doughnut shop in a local town called Mt. Carmel that had a wooden screen door, but that place has been gone for years. 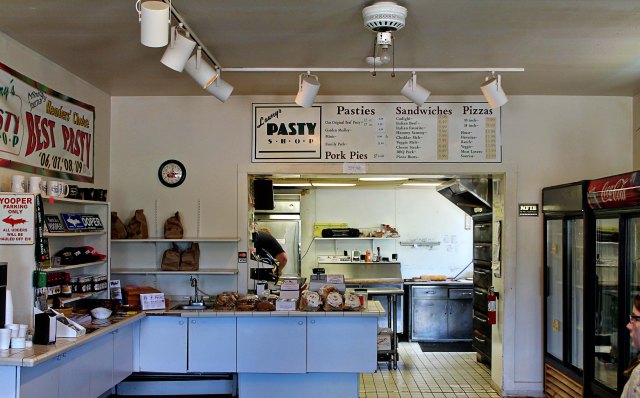 . . .and looked around.  Seems (from the sign) that Lawry’s is the place to buy a pasty.

And so I stepped up to the counter to order a PASS-tee (not a pay-stree or a pay-stee like I had originally thought, but a PASS-tee.)

But I saw the cinnamon buns.  HUGE cinnamon buns.  I asked the price. “Five dollars”, said the guy in the kitchen cutting up potatoes.  “WoW!”, I thought, “Cinnabon charges about that for a small cinnamon bun.”

“Nope, but we could but a pot on.” was the answer.

“Coffee’s free”  he said, and started toward the empty coffee pot.

“Okay, I’m impress.  When is the last time I got a free cup of coffee at a restaurant?” I wondered.

“Sure, that sounds great.  Thanks a lot for going to the trouble.”, I responded.

“What about a PASS-tee,” I asked.  “I’d like to try one since I have seen so many signs advertising them.”

“We only have one kind right now,” came the reply, “It is a Beef Pasty.  You will like it.”

So I ordered one.

And he was right.  I did like it.  The pasty came to the Michigan U.P. from Cornwell, England in the 1850’s.  The U.P. is a big mining community, and miners carried pasties in their lunch.  It was a hot meal and delicious.  This beef pasty contains beef, potato, rutabaga, onion, and spices.  It really was delicious!  A full meal wrapped up in a flaky pie crust.

The girls were loving their huge cinnamon roll, and I was loving my beef pasty. 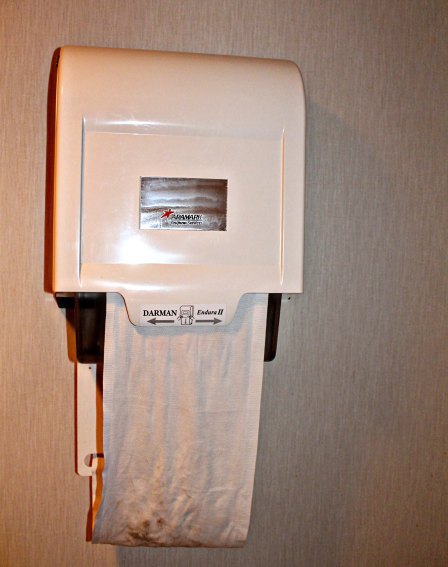 As we left, the shop filled up with locals.  In and out.  In and out they came.  We had found the local hot spot, and loved it.

Back at the baseball fields our team waited to get on the field.  Do you see those trails in the hills?  I was watching the baseball game, and next thing I knew, my kids were climbing those hills.

The game began as usual with the announcement of the player’s names. . . 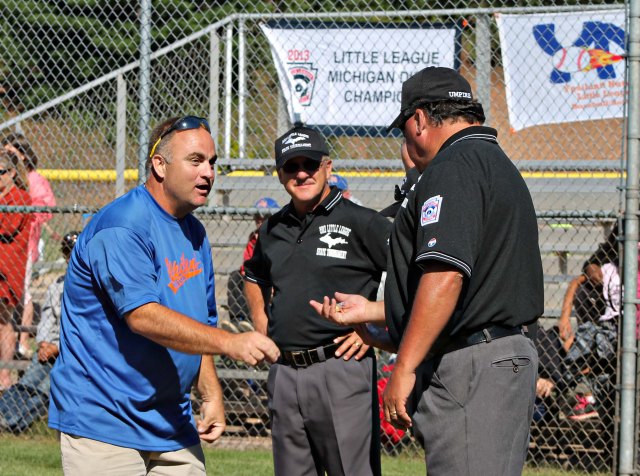 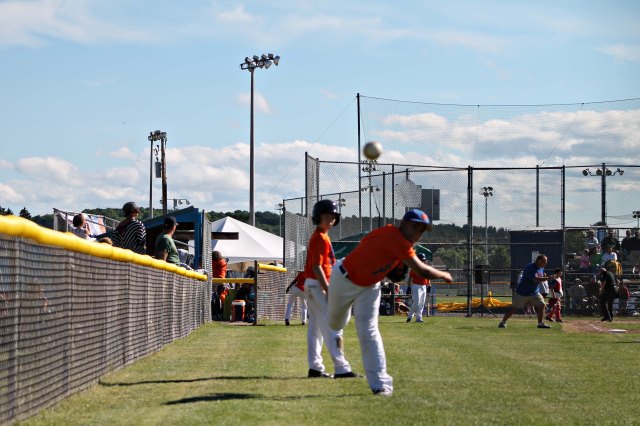 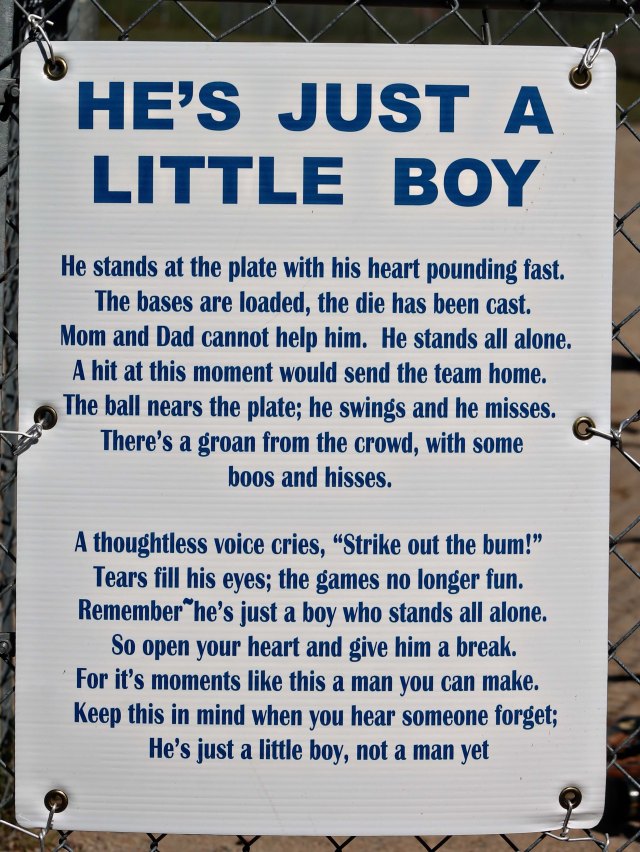 But somehow today, it wasn’t so important to me.

After the game there was a Skills Competition.  Every player had to be entered.  There was the Running of the Bases–fastest time won.  Consecutive Hits–from a 63 m.p.h pitching machine without any misses.  Around the Horn–baseball thrown from home, around the bases, and them back again (timed).  And the Home Run Derby.

It was all fun.  We cheered loudly as “one of our own” took second in the Home Run Derby.

The team decided to celebrate by all going bowling–it was $1 night.

Little Man loved it!  He was given an ball, told to throw it (inside mind you), with the goal of hitting something and knocking it over! 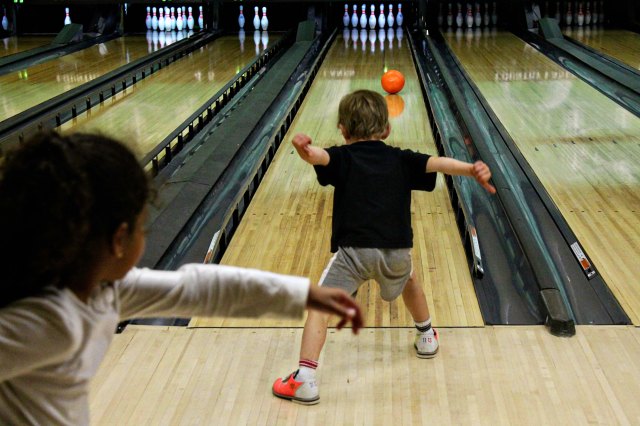 He did a dance each time it was his turn!

And then it was time to leave.  It was well after 10:30, and this Little Man was exhausted.

We walked out into a dark blue sky–it stays light really late here.  There were no clouds, and it was cold–62 degrees.  We were worn out and happy.

P.S. Another U.P. food is the cudighi.  I didn’t try it, but read that it is a sausage sandwich. 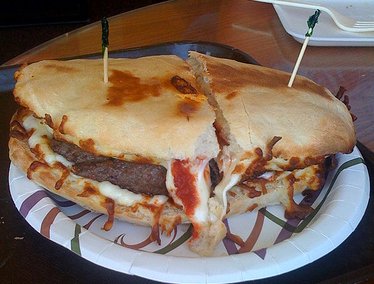 P.S.  If you are just now tuning in, you might want to read about our first couple of days.

This entry was posted in She said... and tagged baseball state tournament, ishpeming, kayaking, marquette, up in the U.P., vacationing in the U.P. Bookmark the permalink.

6 Responses to She Said–Postcards from Up in the Michigan U.P.–Day 3