I wanted to see the sunrise.  I wanted to see Lake Superior awaken to light, and I wanted to capture it in a photograph.  But I didn’t.  I saw the sun rise, but I was too tired and lazy to do more than just sit up in bed and glance outside for a minute or so then fall back onto my pillow.  The next time I woke up the sun was streaming through the window and falling onto my Sunshines. 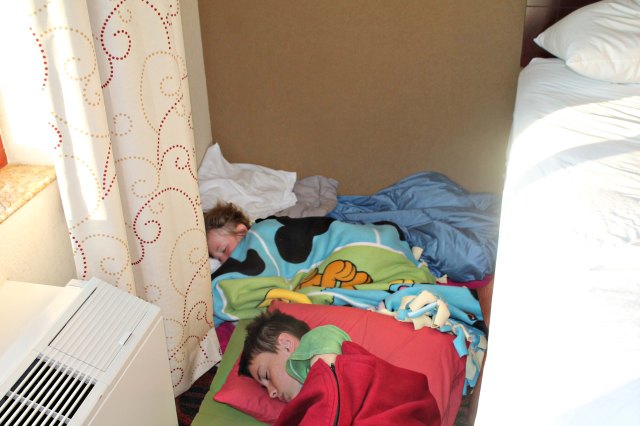 Today was the first day of no baseball.  Most of the baseball families were heading back home.  My hotel points (free nights) had run out, so I had reservations to move to a campground.  However, at the spaghetti supper the night before, the baseball team invited us to just pitch our tent on the lawn.  I called to cancel my campground reservation, but missed the “24 hour” notice.  I was told that “losing a baseball game is not grounds for a refund.”  Never mind that several of our baseball families had stayed there for several nights.  So I lost one night’s deposit.  Blahhhhh!

Before heading over to the “boonies” (hick word for remote area) where the baseball house was located, I wanted to 1) Hike Sugar Loaf Mountain, and 2) Jump off “Blackrocks” into a natural pool.  But I didn’t know where either one was located, and McNally’s map doesn’t highlight local swimming holes or trails.  So with some vague help from the front desk, I headed out.

We couldn’t find the Blackrocks, but we did find this little cove where the kids begged to swim.  (I found this link, and I think we were just a cove or two down.)

The beach was all rocks, but polished smooth enough to not cut our feet.

The girls immediately began a game. 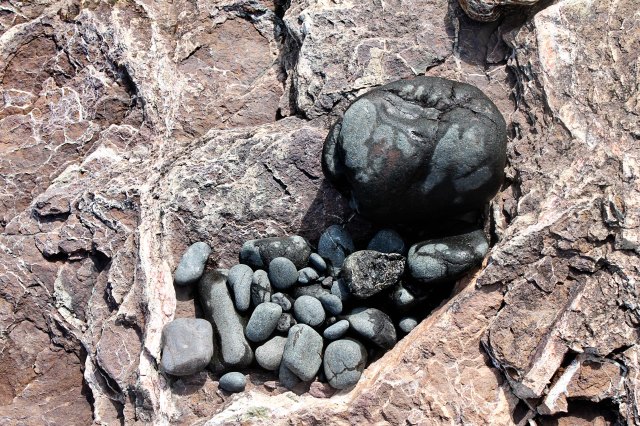 They collected black rocks–which were “clams” and played Clam Hunters.

This boy had been in his own baseball world most of the week–a mini celebrity in a very mini way.  He loved being on the team, but he didn’t always want to be with the family.  He liked to be independent–like waking up and going down for breakfast on his own.  Like walking several yards ahead or behind us.  It was sometimes hard for him to transfer from the “rah, rah, rah” that baseball brings back to the daily duties that being in a family mean.  Today, with the end of baseball, he was locked up inside himself.  And so I left him there.  Skipping rocks. 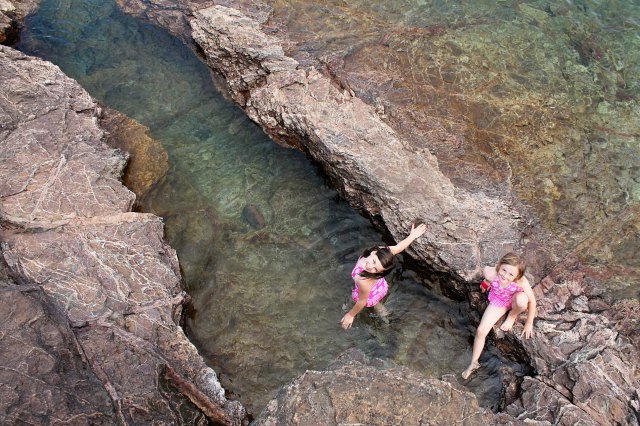 But then the girls discovered this little private pool.  And soon Baseball Boy had to see it.

And then he had to swim in it.  And then he had to start directing his sister about the correct way to swim in it.  And then (without him knowing it), Baseball Boy was back.  He was back in the family.  And the day that he thought was going to be so boring without all his baseball buds turned into a fun time.  I think there is nothing like water and rocks and sticks and such to unlock a boy–at least my boy.

The kiddos were all playing together, and this Mommi was happy.

But also a bit nervous.   This little girl looked so small compared to the vastness of Lake Superior.

I still wanted to find “Blackrocks”, so I made the kids load back into the van and set out again.

Instead of “Blackrocks” we found this sandy beach. 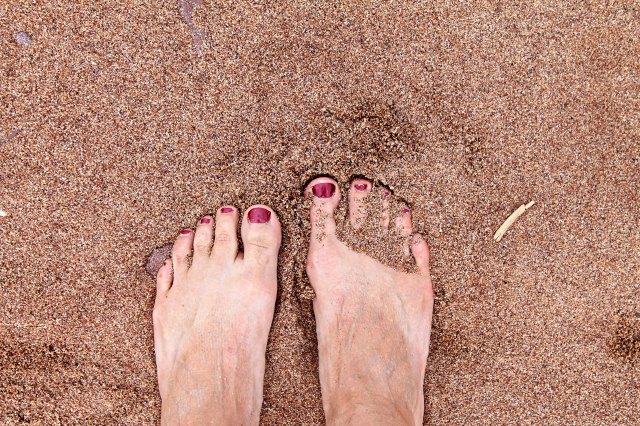 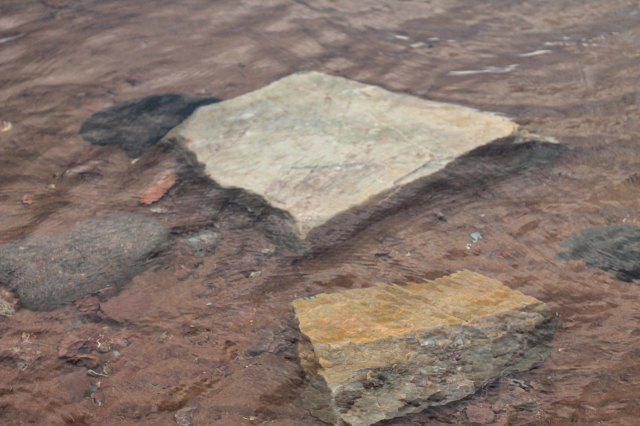 The water was cold and clear. 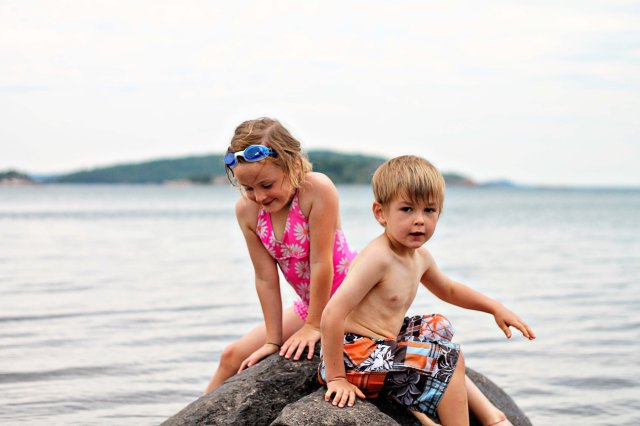 And the kiddos were having a great time.  (This rock is a whale.)

About an hour into our stay, I decided to head back to the van in the parking lot to get a different camera lens, and there I found our van side door wide open–my camera bag, two phones, and purse plainly in view.  The kiddos had forgotten to close the door, and I hadn’t noticed.  Everything was right where we left it.  Not a thing disturbed!

I sent up a “thank you” and headed back down to the beach with a different lens and all the doors of the van closed.

Let me introduce you to a little girl. 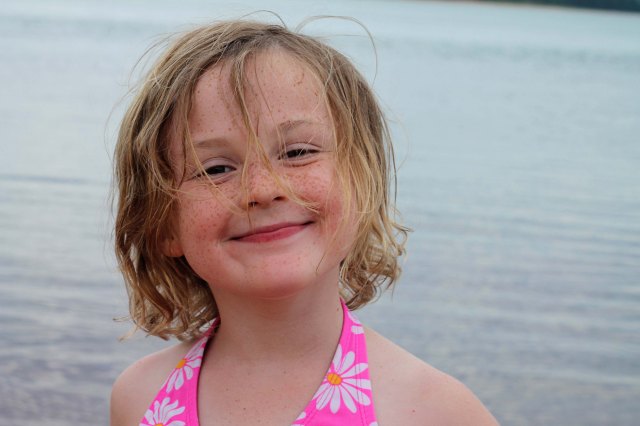 There was a little girl,

who had a little curl, right in the middle of her forehead.

And when she was good, she was very, very, good. 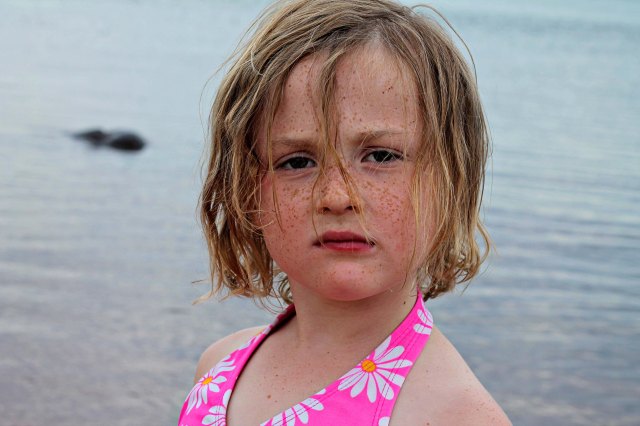 This is the other Beauty. 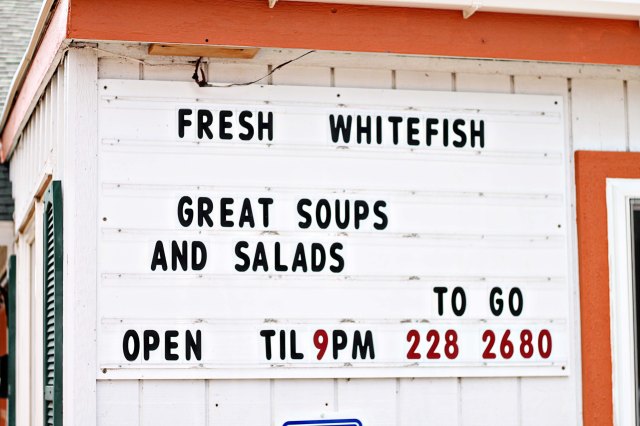 At 2:00 I could hold out no longer.  “We have to stop and eat!” I told the kiddos.   I didn’t want the van full of sand, so the picnickers were treated to a funny scene as I carried each kiddo on my back up the sandy slope.  Baseball Boy protested the entire way, but laughing we both made it.  Sandy and wet we drove down the beach road in search of a restaurant.  I saw this sign and stopped.

The name “Coco’s” seemed beachy.  Besides it was right across from the beach.  We would be fine in our cover-ups and flip-flops and sand coated feet.  (Somehow despite all my precautions, we still had sandy feet.)

We entered and discovered that “Coco’s” is a $10-For-A-Burger-Resaurant.  But we were hungry (and sandy) and stayed anyway.

Little Man was quite sleepy.

Eloise was quite funny.

The fish platter was not on the lunch menu, but they made it for us anyway.  I split a plate with Baseball Boy, but we both could have eaten a plate by ourselves.  The fish was good, the sweet potato fries fine, and the veggies–well they were pretty but cold.  But we were very hungry and ended the meal very satisfied.

We ordered the special “Cracked black-pepper fries” and discovered that we paid an extra fifty cents for pepper on our fries.  They were good, but the best spicy fries are Joy the Baker’s Baked Chili Cheese Fries!!!!  I’ve made them several times.  I found her recipe a bit too hot for our family, so I halved the heat, and we love them.  The fact that they are baked instead of fried takes away the guilt of eating them. 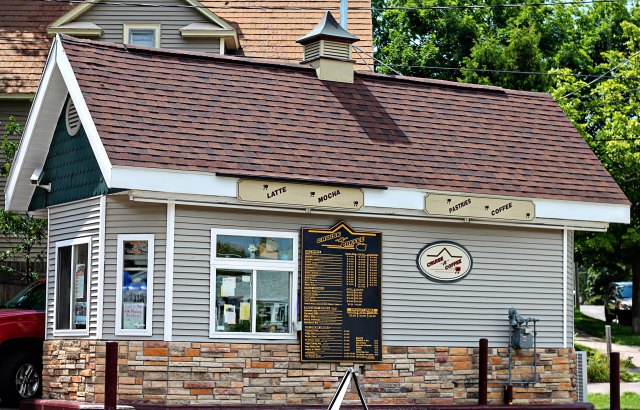 This Mommi needed a coffee before the headache set in, so we asked directions to a coffee shop–Cruise-N-Coffee.  They got my order wrong.  And cold.  But nothing could ruin my day.  My boy had come back.

I announced that now we were going to hike Sugarloaf Mountain.  They all groaned.

But we climbed it (even Little Man) all the way to the top.

It is a 15 – 20 minute hike.  We turned to look back on the city of Marquette that we were leaving.  What a wonderful city and place.  It is has been listed as One of the Best Places to Live in America by CNN.  Now I would never make it through the long winter up here despite the myriad of winter activities offered, but I do think the city and surrounding area is the perfect mix of urban and wilderness, coffee houses and screen doored pasty shops, beaches and mountains, and blue upon blue upon blue.

We had finished our To Hike and Swim list, and were ready to drive the hour into the “boonies” to get to the Baseball House to camp.  Cell phone coverage is extremely spotty in the U.P., and just as we arrived at the bottom of the mountain my phone rang. The voice was all crackly, but I heard the words, “cousin. . . .Michelle. . .camping. . .Facebook. . .U.P. . . 10 minutes. . .come. . .Van Riper. . .” and then I lost the call.  Looking on my map, I found a state park called Van Riper.  I didn’t exactly know how Kurt and Michelle knew I was in Marquette, but I was pretty sure it had something to do with Facebook.

I called the Baseball Coach and canceled out.  What a wonderful treat to unexpectedly meet up with my cousins!!!

(Remember Smokey the Bear?  I loved reading this book as a kid.  Thankfully, I found a worn copy for my kiddos.)

Kurt and Michelle welcomed us and served us supper.  The Hunni had seen a photo they posted on Facebook of the Mackinaw Bridge.  He texted Kurt to find out where they were.  Kurt texted back that they were only about 10 miles from me. 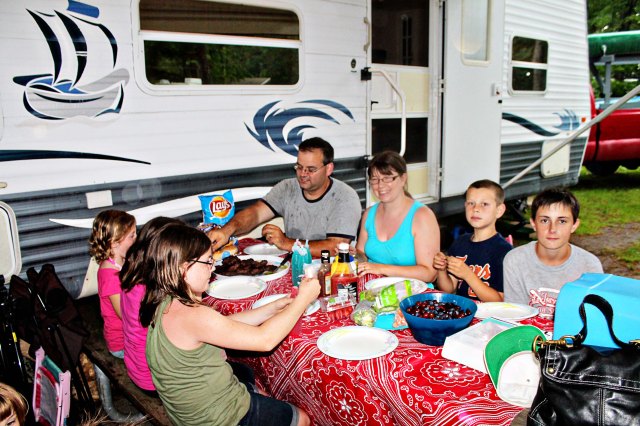 We stayed dry under their canopy as the rain began to fall.

When the rain stopped, we pitched our tent on the lot right across from them.  Kurt directed me as I backed up the trailer, so now I have backed up this trailer a total of 5 times–three times during drivers training, and two times on this trip.  I feel like a pro.

The girls were so glad to see another girl after a week of baseball and boys.

The kiddos swam in a cold lake while we visited a bit.

Then there were smores by the fire. 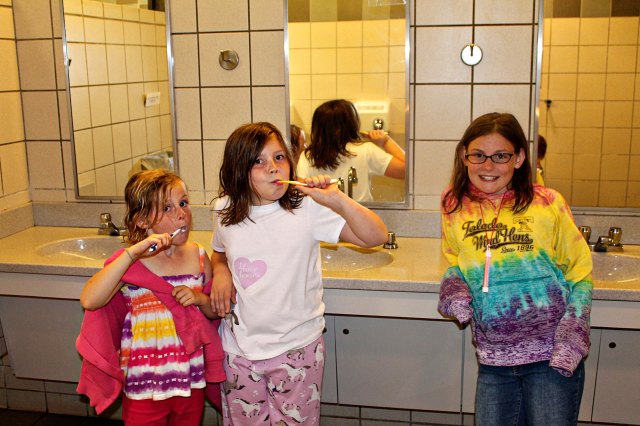 And then it was bed time.

Little Man was so excited to get to sleep in a tent!!  It was his first time ever!  Exhausted from the big day of swimming and hiking, he fell right asleep.

I listened to the hiss of the camping lantern.  It brings back so many memories to me.  I remember the old kind that you used to have to pump up to pressurize the kerosene or the light would begin to flicker and get low.

I love the hissing sound of a camping lantern.  It brings back good memories.

And here is a photo of Blackrocks.  (photo from here.)

This entry was posted in She said... and tagged blackrocks, hiking, marquette, sugarloaf mountain, swimming, things to do in the UP, van riper state park. Bookmark the permalink.

4 Responses to She Said–Postcards from Up in the Michigan U.P.–Day 5