Newspaper Headlines from Here to There: Day 2–November 16, 2016:  Napa Valley

The Pacific Coast Road Trip was on the line.  The Hunni  loved the idea (back in the fall when we bought our tickets), but when the whole car rental fell through, he was ready to scrap the whole “Car Trip Up the Coast” idea.  I told him to wait and think about it for a day.  The following evening he felt the same.  He really, Really, REALLY didn’t want to spend one week driving up the Pacific Coast in two separate vehicles.  I asked him to think about it another day.  He called Southwest Airlines to see what the change fee was.  Two evenings later, we were still not in agreement about the best plan for our Family Vacation.  That evening instead of calling Southwest Airlines, The Hunni called old friends of ours in the San Francisco area to see if they would be in town the day we MIGHT fly into the Bay Area.  Not only did they invite us to spend the night, they invited us to Napa Valley.

I floated around the house for three whole days!!!  I couldn’t believe it!!!  Not only was the Pacific Road Trip definitely ON!, but Napa Valley!!!!  Now I thought that someday I would get to visit Napa Valley with The Hunni, but that “Someday” was an ethereal dream that I didn’t expect to actually materialize.  But it was real!!  And we were going with great friends who I knew were also experts in the area.  Every time The Hunni called me that week I kept saying, “I CAN’T BELIEVE IT!”

I probably should have called Jackie that week, as she would have heard the excitement in my voice.  Somehow, I just felt that this was a gift.  A special something.  One of those “Somedays” that all of a sudden actually had a date–November 23, 2016.   After the first week of excitement, I got a little nervous as I really know nothing about wine and wine tasting and even though I am now a Floridian, I am really just a displaced Mid-western farm girl, and I didn’t want to embarrass Rob and Jackie with my “mid-westness”.  So I started investigating.  Google.   First off, I checked out “Wine for Dummies” from our library and watched the video twice.  The guy on the video made it seem quite easy–swirl, sniff, taste, enjoy.  Somehow, I thought it was more complicated than that.

Next.  How should I dress?  Check Pintrest; “what to wear to a wine tasting in the fall”.  Pintrest seems to indicate that a hat, knee-high boots, expensive sunglasses, possibly a blue and white striped shirt (Kate Middleton wore blue and white checked),  amazing hair, a svelte figure, a very name-brand-ish handbag, and a scarf causally flung around the shoulders were just “A Must!”  Well. . .we would work with what we had–amazing hair and a svelte figure.  just kidding.  My current handbag would have to do.  It is a $13 black Coach bag I found at a thrift store up in Michigan over four years ago.  It looked scuffed up and tired, but then one evening I got the idea of washing it.  The results were pretty surprising.  Instead of black dye staining everything, all the ink pen marks and the make-up spills cleaned out of the pink lining and the white stitching on the outside brightened up.  I added some black shoe polish (trying super hard not to get it on the brighten white stitching) and I had me a Napa Valley Purse.

Boots.  I had a great pair of black leather boots that my mom had bought me last winter.  I get to wear them about once a year down here in Flip-Flop Country, so I was excited about using them for 18 days.  Now Scout is into Pintrest as well, and thought we really needed a pair of brown knee-high leather boots as well.  Since we are the same shoe size, we share shoes, and we clicked on the Frye Boots website daily looking for a sale.  One night I almost clicked on the “buy” button.  Scout and I were going to split the cost, but somehow I just couldn’t do it.  The very next day, I kicked myself for not getting the boots.  Then I found a fabulous pair of leather knee high boots in Ross for $60 instead of $300.  Both Scout and I did a little happy dance when I brought them home.

Hat.  At some Cracker Barrel somewhere, I tried on a hat, and The Hunni surprised me and bought it for me when I wasn’t looking.  I love him.

Scout decided on a purple, slouchy, “beanie”, and we were both happy.

About the svelte figure and the amazing hair.  Our plan of attack was “cover and disguise.” 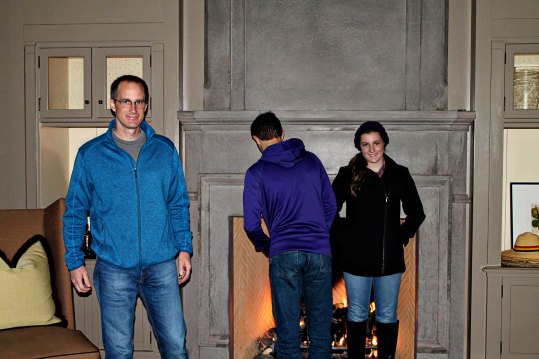 So Scout and I went with long shirts and matching overcoats (which I bought on sale at Walmart last Easter up in Illinois for $15.oo each when I was visiting and freezing.)

I went with a blue and white long shirt and a mustard cardigan.

Scout went with flannel, and Eloise rocked the headband that Scout had crocheted.

The hair was hidden, and we both had sunglasses from living in The Sunshine State.  We were ready, and more importantly we had a lot of fun together getting ready.

I looked at the photos of what “guys wear in fall to wine tasting,” This was never going to happen.  (Thank goodness) Or this.  (photo credit)

Or even this.   The article read, “A glass of Cab Sauv pairs well with a nice cut of lamb. It does not pair well with your backwards baseball cap. A wine tasting should be a lot of fun, but it should also serve as an occasion to class it up a bit. You didn’t practice saying sangiovese to ruin the aristocratic effect by dressing like you’re hitting the gym rather than the vineyard, did you?”

Well. . .I am married to a guy who wears his baseball cap backwards (and looks great), and has never worried about his “aristocratic effect”  so, I wouldn’t try to dress him.  But best of all, he loves me–sans amazing hair and svelte figure. 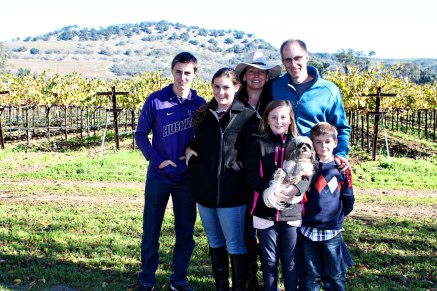 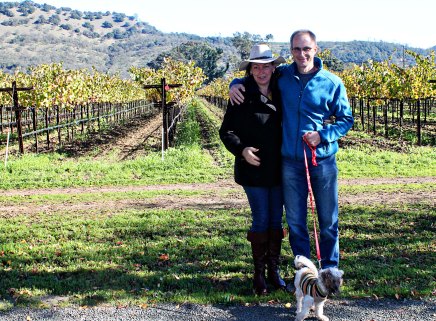